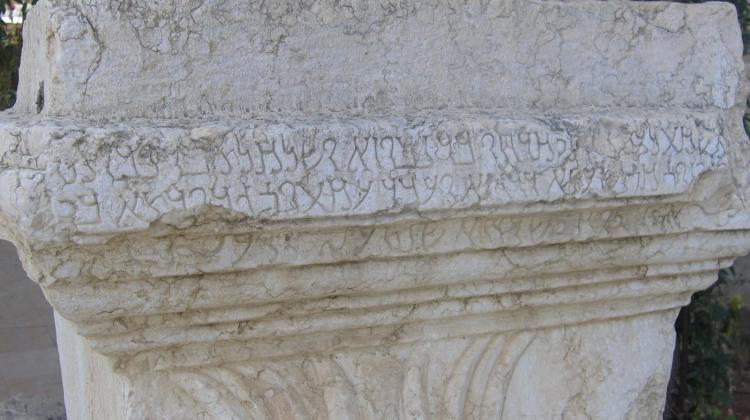 Close-up of an inscription to the 'Anonymous God'. Credit: Aleksandra Kubiak-Schneider

A Polish archaeologist has unlocked a 100-year-old mystery after identifying over 200 inscriptions addressed to an anonymous god.

Aleksandra Kubiak-Schneider had been carrying out research in an ancient metropolis in today’s Syria known as Palmyra when she made her discovery.

Among the approx. 2,500 inscriptions in Aramaic on various architectural elements scattered around Palmyra, she found about 200 texts dated mainly to the 2nd and 3rd century CE. All of them contained mysterious phrases in the form of addressing a deity: 'He whose name is blessed forever', 'Lord of the Universe', 'Merciful'.

Kubiak-Schneider told Science in Poland: “These inscriptions were on stone altars intended for burning the fragrant sacrifice of incense, juniper grains and other aromas and for pouring liquids.”

For about 100 years scientists have been trying to determine which deity was the addressee of this specific phrase. In anticipation of solving the puzzle, they used the term: the Anonymous God of Palmyra.

She said: “This was interpreted as monotheistic manifestations and tendencies to worship the only god, a mystical dimension of the cult of the Lord of Heaven, Baalshamin, as well as a taboo against speaking the name of the deity similar to that existing in Judaism, because these phrases have been evoking and still evoke biblical connotations.”

Meanwhile, the solution to the puzzle was somewhere else. The expert noticed that the specific way of addressing the anonymous deity was the same as in the hymns sung and recited in the 1st millennium BCE temples of ancient Mesopotamia in giving thanks for the received help to many important deities: Marduk-Bel (the most important deity of Babylon), Nabu (the patron god of literacy), Nergal (god of the underground), Hadad (storm and rain god).

According to Kubiak-Schneider, the addressees were multiple deities who deserved the eternal hymn of thanksgiving. According to her, the name 'Merciful' refers to is Bel-Marduk, the head of the Babylonian pantheon also worshiped in Palmyra, who saved people and gods from Tiamat, a monster embodying chaos and darkness. The 'Lord of the World', in turn, can refer to Bel, the Lord of the Universe, as well as Baalshamin, the god of storm and fertility identified with Zeus. Only the phrase 'He whose name is blessed forever' can be universal and refer to any male deity, which listened to the praying person's requests and deserves eternal glory, which is confirmed by ancient hymns and prayers from Babylonia and Asyria from the periods before Alexander the Great and Romans.

The non-use of the name of the god in case of dedication was therefore a sign of respect. The Palmyreans were perfectly aware of the names of their deities, the archaeologist argues.

Kubiak-Schneider said: “It is therefore not surprising that the deity's image is not found on the altars, which in this case is not connected with the prohibition on presenting the divine face. There was no one Anonymous God, every god who listened and showed favour to requests deserved an eternal praise.”

People who funded these inscriptions in Palmyra mainly came from elite and medium-rich families. Among the people who commissioned them were both women and men; some of them were slaves, liberated former slaves, free people, as well as Roman citizens.

According to Dr. Kubiak-Schneider, her finding is significant because it shows the continuity of pre-Hellenistic traditions in the Middle East, which influenced the shape of today's great monotheistic religions: Judaism, Christianity and Islam. Her results also indicate the existence of religious poetry used in rituals nearly 2,000 years ago, but not preserved until today.

In addition, the research shows that deities had many names and titles used depending on the situation and the person addressing them.

Kubiak-Schneider said: “Each name carries a different message, showing different aspects of deities worshipped in polytheistic systems, such as the one in Palmyra or in the cities of Mesopotamia, or the Roman Empire.”

The results of the analyses appeared in the book Dédicaces votives sans théonyme de Palmyre. Béni (soit) sont nom pour l’éternité ('Votive dedications without own names of deities from Palmyra. He whose name is blessed forever') published by Brill.

Palmyra was an ancient metropolis that mediated in trade between the Roman Empire and the Far East - Persia, China and India. Initially, it was a modest caravan city, to eventually become one of the largest metropolises in the Mediterranean region in the 1st-2nd century. It became famous primarily for its picturesque, monumental stone architecture - long colonnades and numerous temples devoted to various gods. Palmyra was declared a World Heritage Site by the UNESCO in 1980. From 1959 to the beginning of the civil war in 2011 this ancient city it was studied by a Polish archaeological mission.