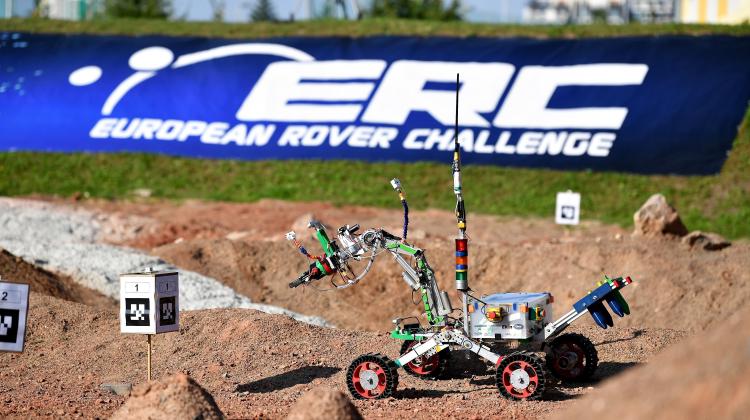 Credit: PAP/Piotr Polak. Kielce, 11.09.2021. The rover presented as part of the European Rover Challenge on the campus of the Kielce University of Technology.

Sixteen teams from seven countries will compete in the finals of the Mars robot competition European Rover Challenge in Kielce in September. The finalists include several teams from Poland.

This year's ERC will be held at the Kielce University of Technology, on the world's largest artificial Martian track, on September 9-11. Over 90 teams from all over the world entered the competition. The jury set the requirements for the participants similar to those set by the largest space agencies.

The Mars rover competition is not the only attraction that awaits visitors to the September event. The ERC 2022 program includes interdisciplinary debates on the future of human settlement on the Red Planet, the survival of the first astronauts in permanent lunar bases, as well as important topics related to the commercialisation and use of space technologies on Earth.

Visitors will be able to see live modern robotic solutions, 3D films explaining the phenomenon of the aurora or describing the structure of Jupiter's ice rings, drive a rover himself and perform a task similar to a real Mars mission.

The speakers at this year's edition will include Gianfranco Visentin - Head of the Automation and Robotics Section of the European Space Agency, Professor Grzegorz Wrochna - President of the Polish Space Agency, Artemis Westenberg - CEO of Explore Mars Europe, Maria Antonietta Perino - Director of Space Economy Exploration and International Network at Thales Alenia Space, and Dr. Gernot Groemer - Founder and Administrative Director of the Austrian Space Forum.

As in previous years, this year's competition will be conducted in two formulas: on-site, in which robots constructed by the teams will take part, and a unique remote formula, in which competitors from all over the world will connect remotely to the Leo Rover mobile robot and robotic arm, located at the Kielce University of Technology.

The participants of the remote formula of the competition will be announced in August, after qualifications.

European Rover Challenge is held under the patronage of the European Space Agency and the Polish Space Agency. The event has also been supported NASA astronauts and officials, heads of robotics departments of ESA, representatives of the European Union Space Program Agency EUSPA, as well as international organizations and space sector companies. Starting this year, the event is also under the patronage of the International Astronautical Federation.

The co-organizers of this year's ERC are the European Space Foundation and Kielce University of Technology. Kielce remains the Host City of the event, and the partners of the event include Mars Society Poland, Poznan University of Technology, Polish Space Professionals Association, Polish Space Industry Association, Kell Ideas, Freedom Robotics, Pokojowy Patrol, MathWorks and Mastercam.

The project is co-financed by the 'Social Responsibility of Science' programme of the Minister of Education and Science.

Find out more at: www.roverchallenge.eu (PAP)