Stork nests can be up to 2-3 meters high and weigh over a ton, says expert 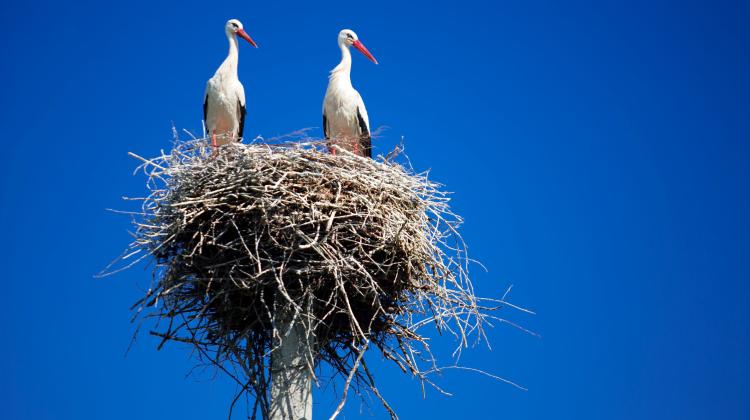 An ornithologist searching for the biggest stork nests in Europe says some can be up to 2-3 meters high, weigh over a ton and be filled with string and foil and even gloves or underwear.

Adam Zbyryt from the University of Bialystok weighed 145 nests while moving ‘threatened and conflict’ nests on poles and building roofs.

He told PAP: “The were weighed while they were being moved. It was the first time we obtained information on such a large scale concerning the nests weighed in full.

“It shows how great energy expenditure their construction, attempting to create a nest from scratch, is for storks. It also helps to understand why storks often fight for existing nests.

“Every year, storks returning from wintering grounds start expanding and repairing the nest. They add sticks, bring hay, straw, manure. Over time, the nest's interior decomposes and soil is formed. That is why the mass of the nest is so large.

“On the other hand, the decomposition process in the nests means that they do not grow indefinitely, but are decomposed and reduced. Still, when this process is slower, the nests can reach 2-3 meters in height at a diameter exceeding 2 meters. Such dimensions happen quite often. When looking from below it is difficult to guess how big they are.”

The nests built on special platforms and utility poles are usually smaller: they are usually about 1.5 meters in diameter and 1-1.5 meters high. To make sure they don’t get too big, power grid managers and property owners regularly reduce or remove them so that their mass does not threaten the structures on which they are located.

Zbyryt said: “I reduced over a hundred such stork nests. It is safest to do from a boom lift truck. The top layers are pulled with forks in the autumn-winter or early spring, before the birds arrive. About one third of the nest is left, preferably-25-30 cm. Never remove the whole nest - storks often abandon such places and try to take over the nests of other birds', the naturalist says. 'In winter, reducing the nest is difficult, because with frosts the interior of the nest is hard as rock. Its parts have to be chopped off with an axe.”

He continued: “In addition to organic matter, you can find a lot of rubbish in stork nests, for example strings in which chicks often get tangled. This leads to limb necrosis and even self-amputation, which in practice means death for the animal, because a stork will not survive without legs.

Zbyryt is now searching for the largest and heaviest white stork nests all over Europe.

Details of the campaign can be found on Facebook, where it is also explained how to weigh the stork nest using an online tool by scientists from the Faculty of Biology of the University of Bialystok, the Institute of Dendrology of the Polish Academy of Sciences and the University of Wrocław.

The width and height of the nest is measured (using a laser measure) - or estimated, and the obtained data entered into the calculator to receive the result. The organizers of the campaign stipulate that to take part in the competition, you do not need to climb the nest - it is even inadvisable or prohibited. The results can be reported by October 15.

Why weigh stork nests? This allows researchers to assess the possible threat to the roof of the building, chimney, pole or another structure, on which the nest is located. In the case of large nests, expanded over the years, the structure strains happen quite often.

Zbyryt said: “I am looking for the largest nest in Europe to find out in what parts of Europe the nests are subject to the smallest human pressure when it comes to the need to reduce them.

“People in Poland remove nests every few years when they are too large. There are also countries where for various reasons this happens much less often, for example Spain or Portugal, where the nests are often located on rocks and their size is not a problem. Or Serbia and Croatia, where they are located on abandoned buildings. There, the nests can develop without human interference.”

He adds that naturalists know of nests occupied by storks for over 50 years, and even ones that have existed since the war or before the war.

Zbyryt said: “Since storks in good conditions live over 30 years, it means that they are somehow occupied by subsequent pairs. These are such permanent nesting places that they go from generation to generation, although they are not inherited by related animals, because the young settle far from the place where they were born themselves.”