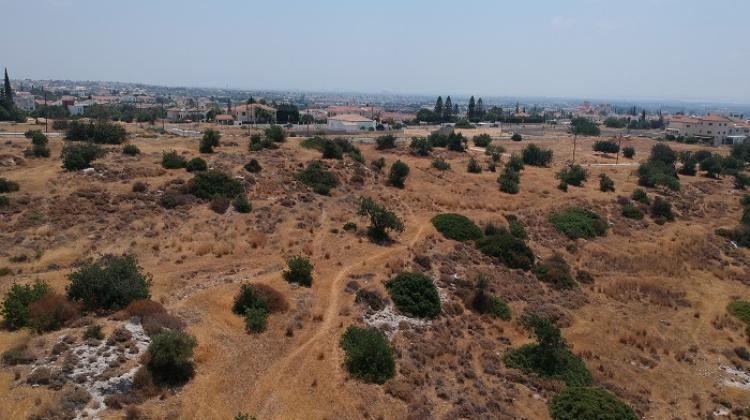 The site studied by Polish archaeologists, view from a drone. Photo from IA UKSW press release

One of the most important Bronze Age settlements of southern Cyprus is being studied by an international team of archaeologists under the supervision of Dr. Katarzyna Zeman-Wiśniewska from the Institute of Archaeology of the Cardinal Stefan Wyszynski University, Professor Laerke Recht from Universität Graz (Austria) and Dr. Lorenzo Mazzotta from Università del Salento (Italy).

The archaeological site in question is Erimi Pitharka. It is located in the Kouris River valley in Cyprus, in one of the archaeologically richest regions of the island, one that is still largely unexplored, director of the Institute of Archaeology of the Cardinal Stefan Wyszynski University (IA UKSW), Professor Fabian Welc told PAP - Science in Poland.

According to information provided by the researchers, Erimi Pitharka was probably one of the most important centres of this region in the late Bronze Age (1600-1050 BCE), as evidenced by the location, size and fortification walls still visible at the foot of the hill.

The main goal of the project is to survey the key part of the settlement from the late Bronze Age - an administrative complex related to agricultural, warehouse and production activities.

The research project was launched in July 2022. Excavations were preceded by non-invasive tests. A georadar was used, allowing the researchers to detect stone structures and even prepare cross-sections at various depths. Professor Fabian Welc who is responsible for non-invasive research in the project said that thanks to this it is possible to determine not only the location and layout of the building underground, but also its likely phases of functioning.

He said: “Geophysical research and analyses gave promising preliminary results indicating the intensive use of the top of the hill in the Bronze Age. The recently started excavations have so far confirmed the results of geophysical survey and begin to provide many interesting finds.”

In addition, the researchers used a drone. This allowed them to prepare a 3D model of the site, which is helpful when selecting places for future excavations.

The late Bronze Age when the studied settlement existed was a period of particular prosperity in the entire Eastern Mediterranean.

Dr. Zeman-Wiśniewska said: “However, at the end of this period, the inhabitants of Cyprus struggled with climate change and migration - challenges similar to those we are currently struggling with. What strategies did the ancient residents of Erimi Pitharka use to tackle the contemporary changes and social and climate threats? We are particularly interested in these questions.”

This year's research will continue until the end of August. In addition to researchers and students from Poland, experts and archaeology students from Cyprus, Austria, the USA and Greece are also involved in the project. Research conducted with permission of the Department of Antiquities of the Republic of Cyprus is co-financed with the Polish National Science Centre grant.