Space
This text can be copied
Ewelina Krajczyńska 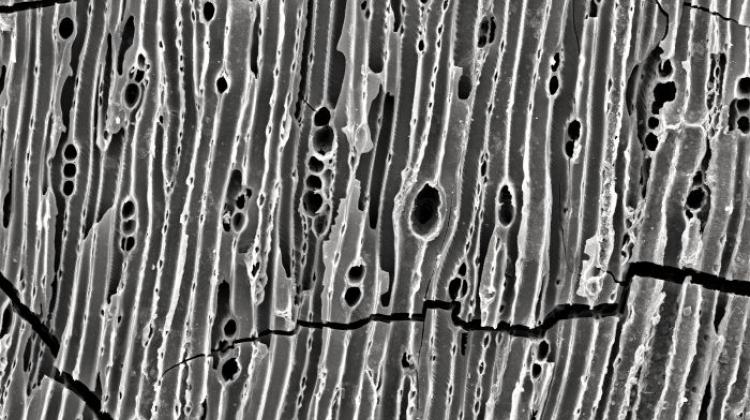 Small asteroids are a greater threat to human civilisation than large objects, because they are harder to spot in space. Traces of their impacts can explain how often they strike and what consequences they may have. An international team managed by a Polish researcher found a way to locate such craters.

“The largest asteroids, ones that can cause a global disaster, provoke the highest emotions among people. But they are not the biggest threat to us: fortunately they are very rare and relatively easy to spot. Thanks to the fact that we can see them, we know that nothing big is going to hit us,” says Dr. Ania Łosiak from the Institute of Geological Sciences of the Polish Academy of Sciences and the University of Exeter in Great Britain.

We should be more afraid of smaller, 30-100 meter asteroids. The smaller the asteroid, the harder it is to spot it before the collision, and the faster the traces of this cosmic disaster disappear. Depending on where the asteroid falls, it may have almost no effects - or have serious consequences for the inhabitants of the impact area.

In the 20th and 21st centuries, two such impacts caused massive destruction. In 1908, the asteroid that fell to the ground in central Siberia knocked down trees within a 40 km radius, it was seen within a radius of 650 km, and heard within 1000 km. According to reports, the disaster could have been caused by an object with a diameter of only 50 m. This event is called the Tunguska disaster. In 2013, in Chelyabinsk in the Ural Mountains, a shock wave and crumbs from an explosion of a 17-20 meter meteorite damaged over 7,500 buildings and caused injuries to over a 1.5 thousand people.

“We should prepare ourselves for such events; it is only a matter of time when another asteroid hits our planet,” says Witold Szczuciński, a professor at the Adam Mickiewicz University, involved in new crater research published in the prestigious journal Geology.

Another co-author of the study, Professor Andrzej Muszyński from the Adam Mickiewicz University, says that in Poland, in the area of today's Poznań, an object once hit that was large enough to create a 100-meter Morasko Crater.

“Numerous charred remains buried in the material thrown out of the crater show that in the case of such an event, it is better to be somewhere else,” adds Monika Szokaluk, a doctoral candidate from the same university.

To prepare for future threats, scientists try to understand how often such collisions happen, and learn their specificity and possible consequences. However, the location of about 70 percent of all craters resulting from impacts in the Holocene (the current geological epoch) remains unknown. There are many lost craters and it is very difficult to find them.

Why is this the case? It is difficult to distinguish between surface features caused by asteroid impacts and those that result from volcanism, glaciers, erosion and other geological processes.

In the case of impacts of larger objects, the matter is simpler, because the pressure and temperature at the collision are so high that they cause a very specific deformation of the rock. The only other events that cause similar effects are nuclear explosions.

The craters caused by smaller asteroids are the most difficult to find. In their case, the pressure and temperatures are lower, and small amounts of transformed material can be scattered over a large area along with the rubble thrown out of the crater by the force of impact, soil and local rocks.

Until now, scientists usually looked for fragments of the asteroid that hit the ground in places suspected of being impact craters. Of the 14 known small craters with diameters below 200 meters, 13 were identified by finding fragments of the object that caused the impact. However, since most of the asteroids in our Solar System are made of rocks, they break up on impact. Finding the remains of a stone asteroid among native Earth stones and gravel is like looking for a needle in a haystack.

It turns out that there is a way to do it. It was discovered by scientists from the Institute of Geological Sciences of the Polish Academy of Sciences and the British University of Exeter, who published a paper on this subject in Geology. The method is based on the study of charcoal from the vegetation 'killed' during the explosion that accompanied the asteroid impact. The new method enables scientists to identify even small craters formed up to several thousand years ago. “After a long time, it is doubtful that the craters will survive. In most cases, the erosion of small craters occurs very quickly and they are not noticeable after a while,” says Anna Łosiak.

It turns out that the properties of charcoal formed as a result of an asteroid impact are significantly different from the impact of charcoal from ancient and contemporary forest fires. The difference can be seen in the charcoal structure and the amount of reflected light.

To measure the properties of charcoal formed after an impact, the team dug research ditches around four already known craters:  the 1,000-year-old Whitecourt Crater in Canada; Kaal Main and Kaali in Estonia, as well as Morasko in Poland. These craters, located in three countries on two continents, were created thousands of years apart.

Pieces of charcoal found there, with sizes ranging from one millimetre to one centimetre, were prepared to precisely measure the light reflection coefficient. The results were then compared with charcoal formed as a result of fires. The differences turned out to be significant.

Dr. Łosiak explains that the more energy we provide to a given fragment of organic matter, the higher the temperature is supplied over a long period - the more regularly the carbon molecules forming the pseudo-graphite structure are distributed. And the better it reflects light.

The average temperature during a forest fire is above 800 degrees C. In the case of such fires, there are pieces of wood that touched the flames directly and they reflect light very strongly, but there are also pieces that are not very charred. Such charcoal is therefore very diverse in terms of its reflective properties.

“In the case of charcoal from impact craters, all these charcoal pieces are very similar to each other, and they are all +baked+ to exactly the same properties. All were +baked+ at a relatively low temperature (a few hundred degrees), lower than the one that accompanies fires,” the planetary geologist says in an interview with PAP.

Although impact charcoals were formed during a violent event, it was probably in relatively low temperatures that affected organic matter over many hours. Scientists explain that an asteroid’s impact probably buries trees, branches and other organic material under a large mass of ejected material, ensuring a relatively high temperature over a long period.

It is difficult to make a mistake because charcoal with similar properties can only be produced in only in tar kilns or formed from wood mixed into the pyroclastic material of volcanoes. “However, in both cases, the average light reflectivity is much higher than in an impact crater,” the researcher points out.