Polish scientists to help create tanks for gas of the future 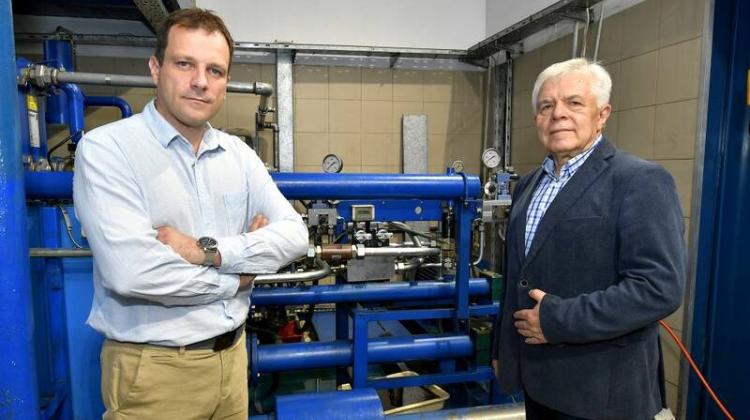 High-pressure, extreme capacity composite tanks for transporting hydrogen with hydrogen tube trailers are being developed by an international consortium that includes scientists from the Faculty of Mechanical Engineering of the Wrocław University of Science and Technology.

The tanks will be used not only to transport hydrogen from the place of its production to hydrogen fuel stations, but also for storing this gas and in huge quantities - up to 1.5 tonnes of gas at 700 bar.

According to the university, places that obtain energy from renewable sources, such as solar power or wind turbines, can be connected to hydrogen electrolysers. During excess energy production, a surplus can be processed into hydrogen and stored in the tank, and when the production is interrupted, for example due to the insufficient sunlight or wind, hydrogen can be concerted back into energy.

The possibility of storing and transporting large amounts of hydrogen is crucial in the context of using it as a more ecological alternative to fossil fuels. In addition, modern tanks will be cheaper than currently used solutions. The cost of their production will not exceed EUR 400 for each kilogram of transported hydrogen.

Project leader Dr. Paweł Gąsior from the Department of Mechanics, Materials and Biomedical Engineering said: “Until now, tanks for transporting a maximum of 800 kg of hydrogen have been constructed, their production cost ranging from 600 to 800 euros per kilogram.

"Our solution will therefore be significantly better than those currently used in every respect.”

The fourth generation tanks currently used have virtually no metal parts, and the liner (the part directly responsible for keeping the gas inside) is made of plastic materials such as polyethylene.

The "ROAD TRHYP consortium will develop fifth generation tanks. They will have no liner at all. Liner is always the weakest link when it comes to the tank safety. Their tightness will be provided by the internal layer of thermoplastic material, which in the production process will penetrate into the tank's composite structure like resin.

Dr. Gąsior’s team will be responsible for conducting research related to the safety of the developed solution. They will verify whether the tanks meet very high standards and determine the threshold values for these tanks.

Gąsior said: “These will be hydraulic tests, because most tests of gas tanks are carried out with liquids such as water, glycol or hydraulic oil.

“We will conduct a number of mechanical and strength tests, as well as cyclic endurance tests at room and extreme temperatures.”

Professor Jerzy Kaleta, who is also involved in the project, adds that as part of such tests, the tanks will be repeatedly filled and emptied, torn and damaged in a programmed way to check their residual strength. The tests will also include penetration tests of composite coating using weapons and strength tests at low (arctic) and high (tropical) temperatures.

He said: “We have to verify the tank's strength and whether its safety valve will work as it should, gradually release small amounts of gas that will burn out, to prevent the +cylinder+ explosion.

“We will conduct all research in our High-pressure Tank Lab using advanced equipment, because such tanks are made of extremely durable materials, including high modulus carbon fibres.”

The scientists have been working on high-pressure hydrogen storage for several years. They work with the largest industry players from around the world. Researchers at the Department of Mechanics, Materials and Biomedical Engineering carry out both R&D and implementation work, including the certification of already developed tanks.

Hydrogen is climatically neutral, which is why it is referred to as the gas of the future. Both the European Green Deal Increasing and the REPowerEU plan, recently adopted in connection with the situation in Ukraine, assume the increase of its use. Multi-billion investments are associated with these decisions.

The researchers said: “Research conducted at our university is yet another step in ensuring the success of such solutions, as well as energy security in the EU.”

The consortium members are several European companies dealing with modern hydrogen and composite technologies, and scientific institutions: the Wrocław University of Science and Technology and the French Centre National de la Recherche Scientifique. Its work will be financed with a European Commission grant worth EUR 2.5 million.