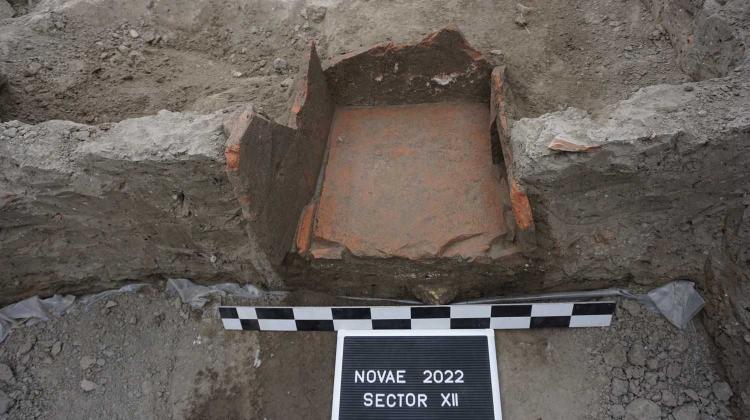 Polish archaeologists have discovered an ‘ancient fridge’ during excavation work at a Roman legion camp in Bulgaria.

Found in what was a room in the military barracks in Novae, lead archaeologist Professor Piotr Dyczek from the University of Warsaw’s Antiquity of Southeastern Europe Research Centre said the food storage unit was made of ceramic plates and contained fragments of dishes and animal bones.

He added that the preserved bone fragments have traces of thermal treatment, which means that the meat stored in the container had been baked.

There were also charcoal particles and a fragment of a small bowl which Dyczek said could have been the remains of a censer used to repel insects.

According to the archeologist, the discovery of such 'refrigerators' are rare, because they rarely survive reconstructions of buildings.

Novae was a permanent base at the Lower Danube limes (border of the empire) in the province of Moesia inferior.

In 69, it was decided to strengthen the border of the empire as the neighbouring Dacia was considered a threat.

Consequently, the newly formed legion, whose recruits were of Italian origin, was moved to the Danube.

The first Italic legion was stationed in Novae until the middle of the 5th century.

For several decades, Polish archaeologists have been studying the camp area together with Bulgarian partners.

Another noteworthy discovery is a collection of coins. A large part comes from layers covering the period from the Goth invasion in the mid 3rd century until the beginning of the reign of Constantine the Great (beginning of the 4th century).

The archaeologists also uncovered the entire strings of walls from that period and the remains of a house. Inside, they discovered quern-stones, weaving and fishing weights, spindle whorls, pits with bones and vessel fragments.

Professor Dyczek said: “At that time, Novae was slowly transforming into a civilian city. Also thanks to the latest finds, we obtained enough data to be able to recreate that part of the history of this ancient settlement, which until now was shrouded in mystery.”

The archaeologists also uncovered fragments of water supply systems made of both ceramic and lead pipes which. Dyczek said that lead pipes are rarely preserved because the raw material of which they were made was valuable and therefore re-used.

According to Dr. Martin Lemke from the Antiquity of Southeastern Europe Research Centre, fragments of the water supply network at Novae show that the Roman army attached great importance to ensuring uninterrupted access to water as the most important necessity. Soldiers could use it, for example, in thermal baths.

In the case of Novae, the water was obtained from the source of the Dermen River, because the nearby Danube was not suitable as a source of drinking water due to too much pollution. The designers made sure that the water supply was of good quality.

The nearly 10-km-long aqueduct supplied water to two large tanks located outside the camp. From there, it was distributed by a complex water supply network and channels to individual recipients, and then discharged into the Danube.