Artemis mission to use devices developed in Poland 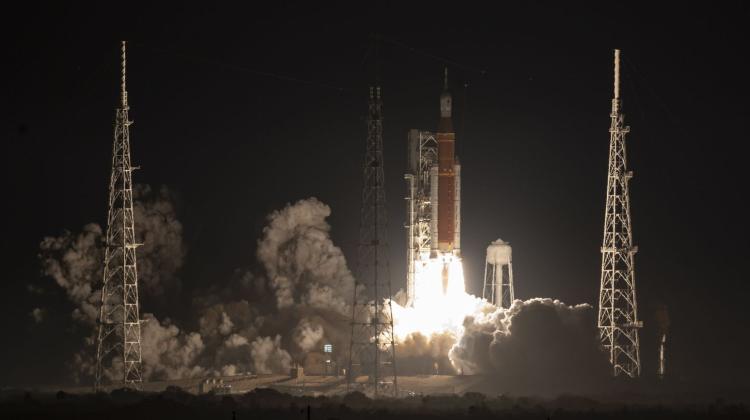 Devices developed in Poland will be used in the Artemis mission. On board the Orion spacecraft there are infrared detectors from the Polish company VIGO Photonics. A set of ionising radiation detectors was developed by the Institute of Nuclear Physics of the Polish Academy of Sciences in Kraków.

The Artemis program is a Moon exploration program led by NASA and implemented in collaboration with private companies and international partners, including the European Space Agency (ESA). The Space Launch System (SLS) rocket with the Orion spacecraft carrying three astronaut-like mannequins launched on a journey around the Moon as part of the Artemis I mission on Wednesday morning Polish time from the NASA Kennedy Space Center in Florida.

This is the first of the flights intended to lead to astronauts' return to the Moon, and then to establishing a permanent lunar base.

One of the basic components of the program is the crewed spacecraft Orion. It has been equipped with infrared detectors supplied by the Polish company VIGO Photonics. They are part of the Laser Air Monitor System - LAMS.

VIGO Photonics CEO Dr. Adam Piotrowski said: "We are excited and honoured that we can support NASA in such a wonderful project that will shape the future of space exploration. The goal of the Artemis mission is to re-establish a human presence on the Moon, and then send men to Mars.

“Our infrared detectors will be part of its equipment; they will be used to measure the levels of carbon dioxide, water and oxygen inside the manned cabin and suits - so they are very important life support systems in future manned missions. We are proud to be part of the Artemis mission.”

VIGO Photonics is a global manufacturer of photonic medium infrared detectors, detection modules and semiconductor materials. Its detectors were used in the Curiosity rover's Tunable Laser Spectrometer (TLS) and in the ESA Exomars program with Schiaparelli lander.

A set of ionizing radiation detectors developed at the Institute of Nuclear Physics of the Polish Academy of Sciences in Kraków will also be used during the Artemis I mission research. Measurement results will determine the doses and the nature of the radiation to which astronauts will be exposed to during the flight to the Moon, the Institute reports.

During the test flight launched on Wednesday, tests will be carried out to determine astronauts' exposure to space radiation. Two phantom torsos (Helga and Zohar) have been placed in places normally intended for the crew. They are equipped with a significant number of passive and active dosimeters. In addition to them, the commander's seat is occupied by third mannequin called Captain Moonikin Campos.

The Matroshka AstroRad Radiation Experiment (MARE) coordinated by the German Aerospace Center involves a number of scientific institutions from around the world, including a team of scientists from the Department of Radiation Physics and Dosimetry of the Institute of Nuclear Physics of the Polish Academy of Sciences.

Dr. Piotrowski said: “The team from the Institute of Nuclear Physics PAS supplied a set of thermoluminscent detectors and innovative nuclear track detectors. After Orion's return to Earth, these detectors will be analysed in the instutite's laboratories.

“The obtained measurement results, combined with the results of other research teams, will allow to determine the doses and the nature of the radiation to which the astronauts will be exposed during the flight to the Moon.”

The next mission Artemis II will be a crew mission. Four astronauts will fly around the Moon at an altitude of 8900 km above the surface. If everything goes well, it should be launched in 2024. Then, in 2025, as part of the Artemis III mission, landing on the surface around the southern pole of the Moon is planned.