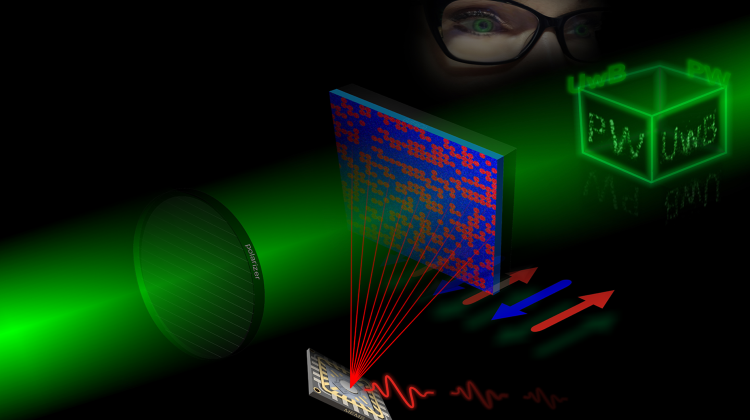 A new method of writing holographic 3D images has been developed jointly by scientists from the Faculty of Physics of the Warsaw University of Technology and the University of Bialystok. Their paper was published in Nature Communications.

The method uses an opto-magnetic medium with a non-volatile memory effect and sequential algorithms without classical matrix calculations. Thanks to the research results, it will be possible to overcome the barriers of resolution and the speed of computing and displaying holographic images.

The authors of the publication used an opto-magnetic GdFeCo (synthetic alloy of gadolinium, iron and cobalt) film in the form of a 20 nanometer thick layer on a glass substrate. This material is very easy and cheap to produce. Its unique feature is the ability to create any holographic pattern by scanning with a beam from a femtosecond laser. It is similar to drawing an image with a pencil on a piece of paper. The structure of the pattern are fast and repeatably all-optically switched (AOS) magnetic spots.

Methods of such magnetic writing are being developed by the Professor Andrzej Stupakiewicz's team from the University of Bialystok.

He said: “We were the first to propose using ultra-fast magnetic writing to create holographic patterns in an opto-magnetic medium. Its advantage is the possibility of obtaining huge resolution and speed.”

Ultra-fast magnetic writing allows a stable magnetic spot to be written and rewritten after an interval of only 30 picoseconds, which, when using a 1 GHz laser frequency, allows for dynamic high-resolution writing unattainable in current technologies.

The authors of the publication managed to create a hologram with a density of approximately 3,600x3,600 points (approx. 13 million points or 4K) per square inch, with no significant limitations of the size of the entire hologram.

What's more, the new method, using a magnetic medium, stores the holographic image as in a magnetic disk, while the process of writing, erasing and re-writing is non-contact and only by means of a beam of light pulses.

Team leader Dr. Michał Makowski from the Faculty of Physics of the Warsaw University of Technology said: “We have presented an algorithm for holographic calculations without the classic and memory-intensive matrix calculations. Instead, we proposed a serial approach, i.e. point-by-point calculation, also in the cloud, in accordance with the repetition of the writing laser beam.

“Because the recording is magnetically permanent, the medium takes over the memory function. Thanks to this, the need for computer memory is zero, regardless of the size of the hologram.”

In cooperation with a group of scientists from Chiba University in Japan, the researchers managed to develop a processor that calculates a hologram point in one clock cycle, i.e. every 1 nanosecond.

The authors of the publication estimate that we will not have to wait until 2100 for the possibility of generating and displaying large-scale 3D computer holograms in the matrix approach - as previously thought.

Find out more in the source article.