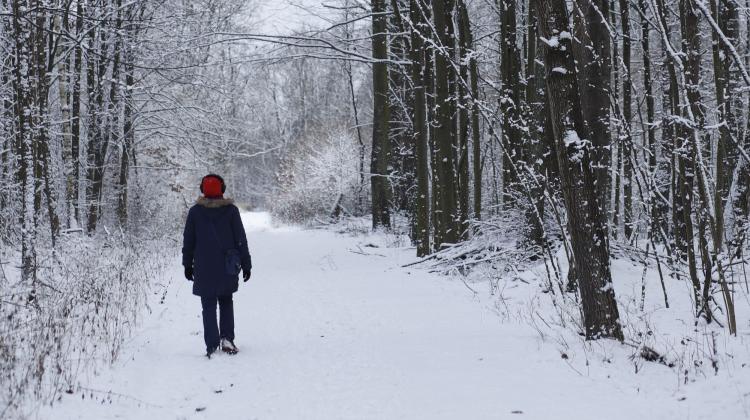 Spending time in a snow-covered setting improves well-being, and walking in a snow-covered forest translates into greater own body appreciation, scientists from the Medical University of Silesia in Katowice have shown.

Previous studies revealed that exposure to nature, including parks and forests, as well as the so-called blue environment, such as the coast or vicinity of a river, is associated with a more positive body image.

The latest study by Dr. Kamila Czepczor-Bernat's team, published in the International Journal of Environmental Research and Public Health (https://www.mdpi.com/1660-4601/19/21/14548) added white spaces such as snow-covered forests to this group.

The experiment was conducted last winter with 87 women with an average age of 24 taking a walk in the snow-covered Cygański Las woodland in the southern part of the city of Bielsko-Biała. Before and after the walk, the researchers asked the participants how they assessed their body. In addition, before the walk, researchers also measured the participants' connectedness to nature and the level of self-compassion.

It turned out that spending even a small amount of time in nature (about 40 minutes) resulted in a noticeable improvement in own body appreciation and satisfaction.

In addition, the researchers found that self-compassion, but not connectedness to nature, was significantly positively associated with a higher body appreciation.

It turned out that only the latter factor was significant. The researcher explains that this was consistent with other studies showing that self-compassion significantly mediates the relationship between exposure to nature and appreciation of one's own body. “It is likely that people who have a high degree of self-compassion also have dispositional variables that allow them to benefit the most from their contact with nature.” she explains. Such people calm down more easily and reach a state of relaxation faster, which in turn leads to a milder self-perception.

In contrast, the level of perceived connectedness to nature did not turn out to be a significant predictor of changes in body appreciation.

“There is now a lot of evidence showing that exposure to nature, i.e. living near it, spending time in nature, frequent contact with environments such as forests and parks, is associated with a number of benefits related to physical and mental well-being,” the researcher says. “However, unlike previous studies that focused on the effects of blue and green environments on body image, we are the first to show the positive impact of spending time in a snow-covered environment. It has proven to be equally effective in improving body appreciation.”

“Being in nature takes us away from some of the triggers for negative body image,” adds Professor Viren Swami, a psychologist at Anglia Ruskin University, co-author of the publication. According to the researcher, it redirects attention from the body perceived only for aesthetic reasons to a greater appreciation of its functionality “Positive body image boosts mental health, and this study adds weight to the growing body of evidence about the importance of exposure to nature.”

According to the authors, through engagement in the form of physical activity in a restorative natural environment, participants could focus more explicitly on a sense of gratitude for what their bodies allowed them to accomplish and adopt self-care attitudes.

“The present findings highlight the importance of ensuring that populations have access to restorative natural environments, which may be a cost-effective means of promoting healthier body image,” the researchers conclude.