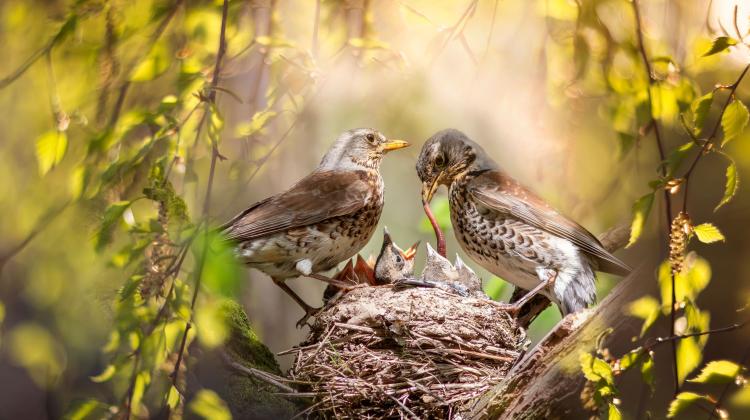 Parental involvement affects the brain size of chicks even before they start interacting with other birds, researchers have found.

Dr. Szymon Drobniak, an evolutionary biologist from the Jagiellonian University, co-author of the publication in PNAS, said: “This surprised us. In previous models, social factors were considered to be of primary importance

“Brain size in birds only began to change after there was a significant evolutionary change in the care of offspring. So, the way of life changed first, and its consequence was a change in brain size.”

One of the oldest problems to be solved in evolutionary biology is the question of what factors influence the size of the brain, and why not all organisms have evolved to enlarge it despite its many benefits.

It is common knowledge that the brain enlarges under the influence of interacting with other individuals (so-called social factors). The authors of the paper in PNAS, however, set out to find out what other factors stimulate the brain before it is fully developed - and thus enable social factors to work.

The researchers carried out a meta-analysis of data for nearly 4,000 bird species. It turned out that even before the social factor, there is another factor at work: parental investment, that is, the energy (e.g. time and food) that parents put into the development of their offspring from the very moment of birth.

Dr. Drobniak said: “This surprised us because it contradicts previous models that put social factors first. The results of our analysis significantly reduce the value of social traits in explaining the evolution of brain size, they become secondary.”

He added that these findings probably can also be applied to the evolution of brain size in mammals, saying: “In some groups of mammals, we have seen that brains are bigger in those species where females nurse their young longer and provide them with more energetic milk. The problem is that on many levels this trend is connected with sociality, and it was difficult for scientists to separate these factors to study their actual impact.”

Birds turned out to be a good group to study because, unlike in the case of mammals, scientists could track the development of their brains at a very early stage. In mammals, the brain develops during foetal life, which makes research into the importance of parental involvement difficult.

Drobniak said: “It is easier with birds because all foetal development takes place outside the female's body (after the egg has been laid). So we can measure the size of the egg, which is related the amount of nutrients in that egg.

“After the chick hatches, we can also observe exactly how much energy the parents invest in the development of their offspring. We can clearly see the impact of parental involvement on brain development in birds.”

In the case of birds, it is also possible to study the influence of various factors separately, which is difficult in mammals, because in most of them social traits are inseparably linked to parental involvement.

The scientist admits that at this stage of work, “it seems obvious that social factors could not have been the first to drive the evolution of the brain, because they only enter into play when brains are large. But in our publication, we were the first to show it so clearly.”

He also added that man looks at the benefits of having a large brain from an anthropocentric point of view. He said: “How could any animal not want to possess such capabilities as a human. But from an evolutionary point of view, this is only one way a species can achieve evolutionary success.”

The scientist revealed that in the next stage of work, the team will attempt to better understand the evolutionary mechanism of shaping the brain.

He said: “We know it's about parental investment, but what we're interested in is the mechanism, in what happened in the course of evolution. Because the size of the brain depends on many factors, for example, how much space for growing the brain has in the skull.

“This, in turn, depends on the morphology of the skull, for example, the shape of the bird's beak. And that depends on the food that birds eat and the climate they live in. So we have a lot of details at our disposal that we want to look at and think about how it happened in the past, at a very primitive stage of evolution.”

From a scientific point of view, the researcher believes, the issue of adapting the brain to lifestyle and proportions to the size of the whole body seems interesting.

He said: “In birds, there is a very clear trend that the further we go in evolution, the brain does not get bigger, but it becomes more and more adapted to the bird's lifestyle and body size.

“Humans have large brains, which give us a lot of benefits in our young lives, but in old age it causes neurodegenerative diseases and a heavy burden. So perhaps evolution will simplify the human brain.

“We will analyse data from fish to mammals, on a very large scale. We will see whether the patterns we have identified in birds can also be seen in other vertebrates.”