#Askscientist: What is that white line in the sky behind the plane? 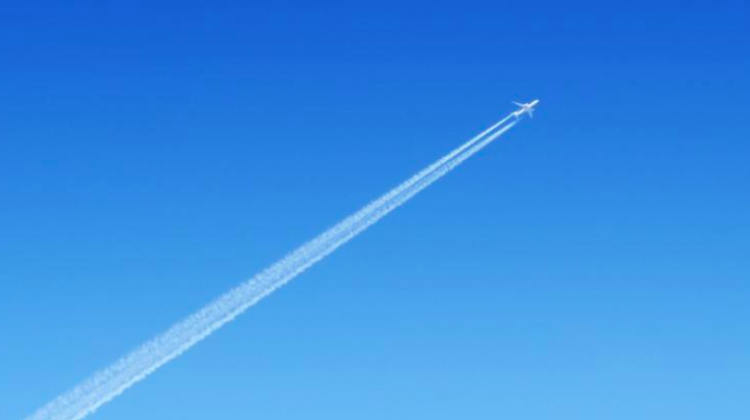 The white streak that the plane leaves behind it in the sky is simply a cloud of water droplets or ice crystals. It forms when hot steam from the engines liquefies, mixing with cold air at high altitude. Just like steam from a kettle - says cloud physicist Prof. Szymon Malinowski.

During the Science Picnic, throughout the day we collected questions that visitors wanted to ask the scientists. Now we ask researchers some of these questions.

With the question "What is this white line in the sky?" we turned to cloud physicist Prof. Szymon Malinowski from the University of Warsaw. He is a co-author of the website "Nauka o klimacie" ("Climate Science") and winner of the Science Populariser 2017 award.

The scientist replied: "This white line behind the plane is a contrail (condensation trail). It is simply condensed water vapour or small ice crystals".

He explained that planes burn fuel that contains hydrocarbons. During combustion, hydrogen from hydrocarbons combines with oxygen in the air and forms water. More precisely - in a hot engine - steam.

"When this hot water vapour from the engine encounters the right conditions - low temperature and sufficiently high humidity in the environment - steam condensation occurs" - said the scientist and added that this is exactly what we often see as a white cloud behind a plane.

"What happens there is exactly the same phenomenon that we sometimes observe in winter, when we breathe and a cloud of liquefied steam escapes from the mouth, or when the kettle boils and releases a cloud of steam" - he said.

The scientist emphasised that water vapour - water in the form of gas - is transparent. Only when steam is condensed and turns into water, it becomes visible. Droplets of water suspended in the air reflect light. And if there are a lot of them, they are visible as a white "cloud".

Professor Malinowski explains why the streak in the sky can sometimes be seen longer, and sometimes it disappears quickly. "If it is very dry, water vapour dissipates very quickly, mixing with the environment, and the contrail may never be formed" - explains the scientist.

But if there is a lot of water vapour in the air, condensation trail forms much more easily. And you can see it in the sky for a longer time.

Asked why there is no visible streak when a plane takes off, Prof. Malinowski replied that this phenomenon does happen, but very, very rarely. "Temperatures at cruising altitudes are -40, -50 degrees C, and the pressure is 1/4 or even 1/5 of what we have near the surface. Up there even a very small amount of water vapour in the mixture causes the state of saturation" - he noted. He explained that the state of saturation is a state when in given conditions we can no longer "fit" more water vapour in the air. Each excess is condensed.

He added that the temperature and pressure on the ground are so high that much more water vapour can be "stuffed" into the same volume of air without creating a cloud.

"Similarly, when warm breath mixes with cold air outside in winter, you see clouds of water droplets. You will not see this phenomenon in the summer" - he compared.

Professor Malinowski added that while a taking off or landing plane usually does not leave a white streak behind the engine, an attentive observer may notice a white strip over the aircraft`s wing during take-off or landing. He explained that this is due to the lower pressure above the wing. The pressure difference over the wing and under the wing creates the lifting force that lifts the plane. At lower pressure, when the air is wet, condensation of water vapour from the air occurs and you can see a streak.

To all conspiracy theorists who believe that in addition to water planes also leave so-called chemitrails that supposedly are a proof of spreading mysterious substances, Prof. Malinowski responds: "This is complete nonsense. The phenomenon of contrail behind the plane is well known and thoroughly described by cloud physics. There is no reason to explain what happens behind the plane with the existence of mysterious forces". Prof. Szymon Malinowski invites all those, who are still unconvinced, to a discussion on the Climate Science website. "We still have a lot of visitors who try to convince us physicists that we do not understand the physics of clouds" - he concludes.