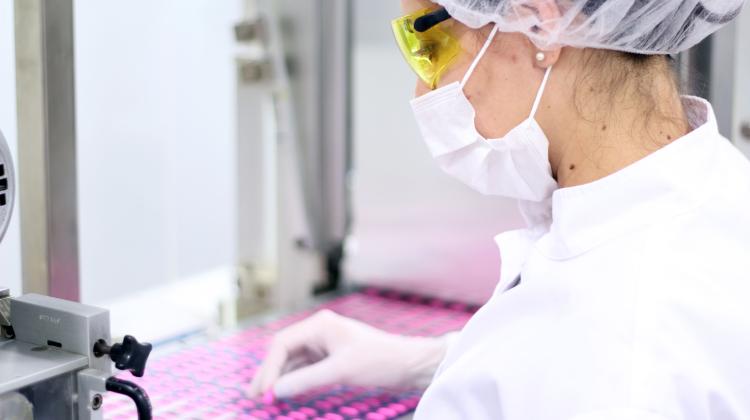 One in twenty persons suffers from neuropathic pain, which impedes the normal functioning of the patient. The hope for these people can be innovative drug developed at the Jagiellonian University Medical College. The drug may also help people with epilepsy.

"We have found a compound that can help both epileptic patients (about 1-2 percent of the population suffer from this disease - PAP) and those with neuropathic pain, who account for more than 5 percent of the society". - told in an interview with PAP Dr. Anna Waszkielewicz of the Faculty of Pharmacy, Jagiellonian University Medical College, coordinator of research into the new drug.

The specialist received the first prize in the competition "Innovation is a woman" for her research.

The researcher explained that the drug she developed under the supervision of Prof. Henryk Marona had already passed most of the tests on animals, including large mammals. She revealed that the compound was determined to be ten times stronger than previously registered similar drugs. Indications are that it will also be effective in the treatment of people, but the first tests on humans are expected to begin in two years at the latest.

"Normally, pain protects the body from damaging stimuli. Neuropathic pain no longer protects, it becomes a disease. The pain is caused by stimuli that should not cause it" - said the researcher.

He admitted that neuropathic pain could be associated with shingles, cancer, AIDS, and, although rarely, diabetes. In addition, neuropathic pain occurs with phantom pain, when the person who lost a limb still experiences pain in it. "The reasons for such pain may be different, but this pain is always uncontrolled and the suffering of patients can be huge" - added the scientist.

"We were searching for a compound that would stabilize functioning of nerve cells and prevent seizures in animals, and by chance we found the substance acting on a specific receptor in these cells - sigma receptor - responsible solely for the pain" - said the expert from the Jagiellonian University.

According to the researcher, until recently it was thought erroneously that sigma receptors belonged to the family of opioid receptors - i.e. those affected by morphine. However, morphine would not bring relief to patients with neuropathic pain. New compounds were needed that would act selectively in new mechanisms of action. Such a compound is being developed by Dr. Waszkielewicz.

The researcher explained that none of the currently registered drugs worked exclusively on sigma receptors. This is very good news - it means that the medicine from the Jagiellonian University probably can be combined with other drugs used in neuropathic pain, and it can be used in parallel with previous therapy. "Our medicine should help, but do not harm - believes the researcher. - This compound is safe due to the fact that if the pain is gone, the drug does not work, even in large doses" - explained Waszkielewicz.

The drug developed at the Jagiellonian University could be used not only in the treatment of neuropathic pain but also epilepsy, especially in cases of drug resistance, when the current treatment stops working.

Dr. Waszkielewicz explained that research on new drugs against neurological diseases is very difficult, costly and time-consuming - 10-20 years usually pass from the idea of a drug to its use in humans, and the time between administration to the first patients to release to the market is another 6-7 years.

In addition, research is associated to ethical dilemmas - before a drug is given to patients, it must be tested on animals. Efficacy can be checked by inducing the animal\'s pain and then treating the pain. For this reason, only the most promising substances get to the testing stage, after obtaining the approval of the relevant ethics committee. The compound developed at the Jagiellonian University in the AED search program has already been tested at the National Institutes of Health (National Institutes of Neurological Disorders and Stroke) in the United States, in animal studies, isolated cells, enzymes and genes.

The compound is already patented in Poland and several pharmaceutical companies are interested its production.

Studies carried out in Poland are financed by the European Regional Development Fund under the Innovative Economy Operational Programme.