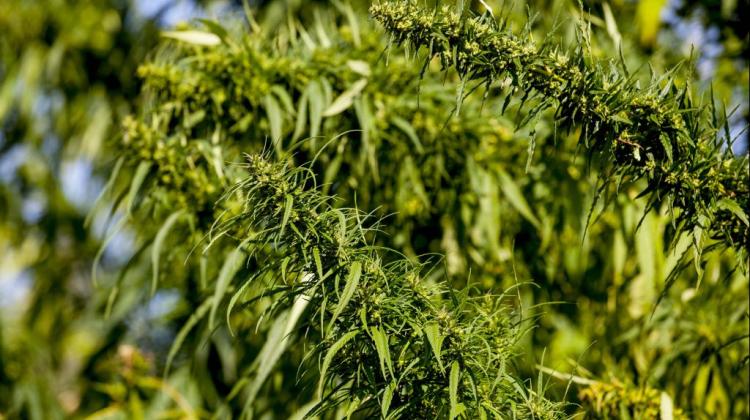 The first Polish dietary supplement obtained from hemp and containing cannabinoids is available in pharmacies - researchers announced on January 26 at a press conference in Warsaw. It does not have anything in common with medical marijuana - the experts stressed.

Director of Research at the Institute of Natural Fibres and Medicinal Plants in Poznan, Prof. Maria Władyka-Przybylak noted that the dietary supplement is made from hemp, which can be legally grown throughout the European Union, and has nothing to do with medical marijuana.

"You have to distinguish between hemp (Cannabis sativa), and cannabis (certain species of the herb, other than fibrous), which are illegal and psychoactive" - stressed the expert. Hemp has been known in Poland for centuries, but only now its crops are returning, due to conducive grants from the European Union. Hemp can grow almost anywhere, it does not require fertilization or irrigation.

Prof. Iwona Wawer from the Faculty of Pharmacy, Medical University of Warsaw explained that different species of the herb contains more than 80 types of cannabinoids, and only cannabis is rich in tetrahydrocannabinol (THC), which has psychoactive effects. Hemp contains no more than 1 percent. Only varieties containing up to 0.3 percent THC are approved for cultivation in the EU since 1996.

"Hemp contains mainly cannabidiol (CBD) and cannabinol (CBN). Many people, even doctors, often confuse these substances with psychoactive THC - emphasised the expert. - In terms of chemical structure they are similar, but their action is completely different. THC acts as an agonist of receptors of nerve cells, and CDB is an antagonist. This means that it is an antipsychotic and has beneficial effects on anxiety and depression."

The expert added that marijuana contains more than 10 percent THC, and sometimes even more than 30 percent cannabinoids. Hemp, on the other hand, is valued for CBD content as well as oil containing 75-80 percent essential fatty acids (EFAs), including particularly valuable omega-6 and omega-3 in the ideal ratio of 3: 1. "For this reason hemp was previously added to the diet, my grandmother used it" - she said.

Dr. Ewa Woydyłło-Osiatyńska , who heads the international program of prevention of addiction at the Stefan Batory Foundation, argued at the conference that cannabidiol (CBD) is not addictive. "On the contrary, although it is associated with a drug, it has the opposite effect, it can increase the effectiveness of treatment of many addictions, such as alcoholism, drug addiction, addiction to medication" - she said.

Head of the Department of Pathophysiology at the Medical University in Lublin Prof. Stanisław J. Czuczwara emphasized that cannabidiol may be helpful in treating many diseases and ailments: it relieves cancer and neuropathic pain, reduces nervous tension in patients with multiple sclerosis, relieves nausea and vomiting in patients undergoing chemotherapy, and stimulates appetite.

"This action of CBD is confirmed by many studies. It is still uncertain to what extent it has an effect on intractable epilepsy in children. Previous observations show that it enhances the effects of anticonvulsant antiepileptic drugs" - said Prof. Czuczwara. He added that a publication of a major study on the subject is expected this year, which may answer the question about the usefulness of cannabinoids in the treatment of epilepsy.

According to the report on cannabinoids made available at the conference, prepared by Prof. Wawer and Dr. Agnieszka Szymecka-Wesołowska of the European Institute for Supplements and Nutritional Foods, a drug containing the CBD has been developed in the United States, which can improve the health and quality of life of both adults and children with epilepsy. "It appears that the mechanism of action is related to the inhibition of glutamate release, which reduces the frequency of epileptic seizures" - emphasized the authors.

Prof. Wawer said at the conference that research is conducted on the use of cannabidiol (CBD) in the treatment of many other diseases, such as Parkinson\'s disease, schizophrenia and Huntington\'s disease.