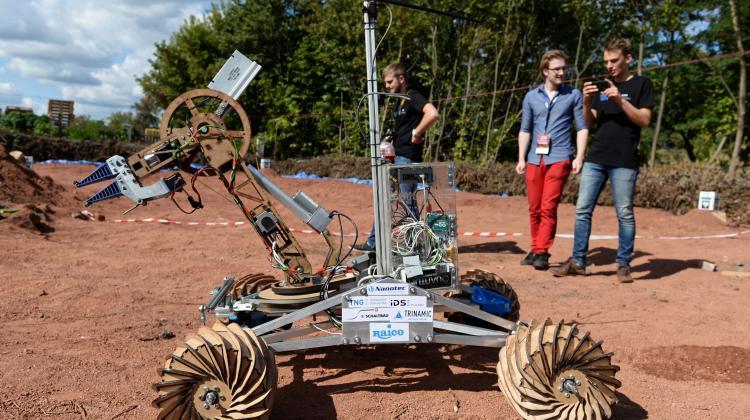 Two parallel categories of Martian rover competitions, demonstrations of scientific experiments, robotic construction workshops and a mentoring and business conference - these are the highlights of the 5th edition of the European Rover Challenge. The event will take place in mid-September at the Kielce University of Technology.

The first two editions of the ERC were held at the Regional Science and Technology Center in Podzamcze Chęcińskie near Kielce. The organizing committee moved the third edition to Jasionka near Rzeszów (province Podkarpackie).

Last year, the event returned to the province Świętokrzyskie and took place in mid-September at the Museum of Nature and Technology in Starachowice.

Deputy Minister of Foreign Affairs Piotr Wawrzyk announced on Monday that his ministry would become involved in this year`s event, because - as he said - the Ministry of Foreign Affairs tasks were not limited to diplomacy, but also included participation in projects that would promote Poland, its products, industry, Polish technical thought and science at home and abroad.

He also congratulated the Kielce University of Technology students on their victory in this year`s Mars rovers competition in the US in the beginning of June, adding that it was the best international promotion of Poland. "It shows that Poland is not just agriculture, it is not only a matter of trade, Poland is also a country of new, ultra-modern technologies. The Świętokrzyskie province and the Kielce University of Technology are the leaders of this trend" - said Minister Wawrzyk.

Marshal of the Świętokrzyskie province Andrzej Bętkowski emphasised that the region was beginning to be famous for Mars rovers. "We want to support this good streak, this tradition of our university students in competition - because it is a competition of knowledge, skills, technology - with current or even better results" - added Bętkowski.

During this year`s edition of the ERC, students from all over the world have been traditionally invited to the competition (the ERC Student formula). 40 teams from 15 countries have qualified. The finalists include representatives of Germany, Canada, the UK, Poland, Turkey, India, Colombia and Australia. "We raise the bar every year, so it was very difficult to qualify this year" - said Łukasz Wilczyński, president of the European Space Foundation, the main organizer of the ERC.

As in the previous year, the organizers have also planned a competition for professional teams (the ERC PRO formula).

The ERC is an open event with free admission for all viewers. In the Science and Technology Shows area, space, robotics and science enthusiasts of all ages will have access to dozens of tents full of attractions, including demonstrations of scientific experiments, robotic construction workshops, hologram simulations and race car drives. Visitors will also see presentations of Polish devices created by space sector companies that are used in space missions of the ESA (European Space Agency) and NASA.

In addition to the competitions of Mars rovers, the organizers have also planned a mentoring and business conference. "It will take place on Friday and Saturday. We will focus on several topics - including the problem proposed by the teams: what`s next? They win, but do not know how to commercialise, what to do with their success" - said Wilczyński.

PAP - Science in Poland is the media sponsor of the competition.

The mission of the European Space Foundation is to promote science, knowledge and support research projects related to space technology, engineering and astronomy. The foundation is active in the field of cooperation and transfer of knowledge between enterprises and institutions. It is a non-profit organization.