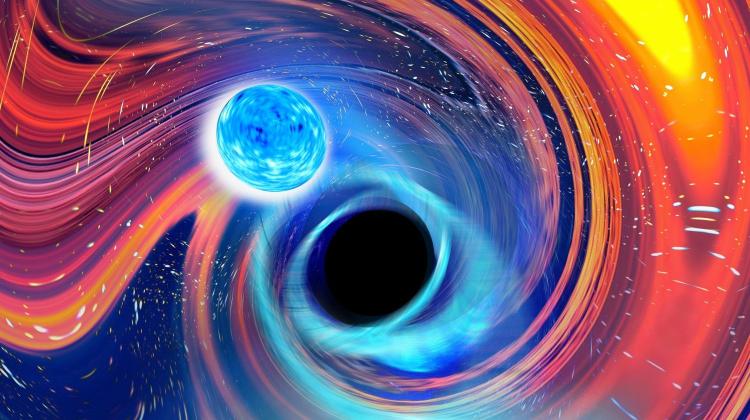 An artist's depiction of a merger of a black hole and a neutron star. Credit: Carl Knox, Ozgrav, University of Swinburne.

A signal from a cosmic disaster, in which a black hole ‘swallowed’ a neutron star, has been registered for the first time thanks to gravitational waves.

Scientists at the Advanced Ligo detector located in Louisiana in the US and the Advanced Virgo detector in Italy first picked up the waves coming from a previously unknown object on January 5, 2020.

The signal was emitted when a neutron star and a black hole rotating around each other merged into one compact object. Researchers witnessed the last few orbits before the merger and 10 days later detected a signal from a similar binary system. The systems were named GW200105 and GW200115.

Professor Tomasz Bulik from the Astronomical Observatory of the University of Warsaw who was involved in the programme said: “Until now, the only gravitational waves that could be observed came from the mergers of two black holes or two neutron stars. A mixed system was registered for the first time, although together with Professor Krzysztof Belczyński we had predicted this scenario for 20 years.”

According to the analyses, the black hole in GW200105 had a mass of 8.9 solar masses, and the neutron star - 1.9 solar masses. Although merging around 900 million years ago, the signal only reached planet Earth now.

In the case of GW200115, the masses amount to 5.7 and 1.5 solar masses, respectively and merged nearly a billion years ago.

In both cases, the more massive objects match the range predicted for black holes in the theory of the evolution of stars, and those with smaller masses match the predictions for neutron stars.

In addition to a gravitational wave signal, a merger of a black hole with a neutron star may also result in emission of electromagnetic radiation. It was not possible to observe the latter due to a long distance to sources and a small accuracy of their position in the sky. But scientists hope that in the future, such radiation can be registered for other, similar events.

The appearance of black holes and neutron stars in pairs is extremely rare. The first pair of neutron stars was observed in 1974 with radio telescopes (by observing pulsars, or rotating neutron stars that emitted a beam of radio radiation). The existence of black couples with star masses is also confirmed (confirmation was obtained a few years ago thanks to observations on gravitational waves). The problem remained of mixed double systems consisting of both of these bodies - until now, such a system could not be observed with 100 percent certainty.

The events of GW200105 and GW200115 are the first certain detections of black hole - neutron star mergers. The events GW190814 and GW190426 detected earlier could also be the results of similar collisions, but there is no certainty in their cases and scientists describe them only as candidates for pairs of objects of this type.