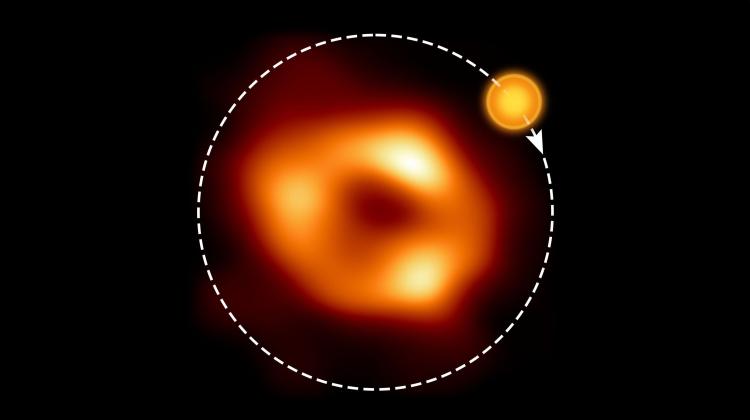 A still image of the supermassive black hole Sagittarius A*, as seen by the Event Horizon Collaboration (EHT), with an artist's illustration indicating where the modelling of the ALMA data predicts the hot spot to be and its orbit around the black hole. Credit: EHT Collaboration, ESO/M. Kornmesser (Acknowledgment: M. Wielgus)

Scientists have detected a 'hot spot' orbiting Sagittarius A*, the black hole at the centre of our galaxy. The discovery was made by a team led by two Polish astronomers, who analysed the observations made with the Atacama Large Millimeter/submillimeter Array (ALMA).

Project leader Dr. Maciek Wielgus from the Max Planck Institute for Radio Astronomy in Bonn (Germany) and the Nicolaus Copernicus Astronomical Center of the Polish Academy of Sciences in Warsaw, said: “We think we're looking at a hot bubble of gas zipping around Sagittarius A* on an orbit similar in size to that of the planet Mercury but making a full loop in just around 70 minutes.

“This requires a mind-blowing velocity of about 30 percent of the speed of light!”

The observations were made in the Chilean Andes. ALMA is an international research project, and Europe is represented by the European Southern Observatory (ESO), whose members also include Poland.

ALMA conducted observations as part of the project called the Event Horizon Telescope (EHT) Collaboration to image black holes. Until now, this has been done for two supermassive black holes: in the M87 galaxy and in the centre of the Milky Way (Sagittarius A*). In April 2017 ALMA and seven other radiotelescopes around the world conducted joint observations that enabled this. In the case of a black hole in M87, the results were announced in April 2019, and for 'our' black hole in the Milky Way - in May 2022

Dr. Wielgus and his colleagues used ALMA data to calibrate the EHT data. To their surprise, there were more clues in the ALMA-only measurements. By chance, some of the observations were done shortly after a burst or flare of X-ray energy was emitted from the centre of our galaxy, which was spotted by NASA’s Chandra Space Telescope. Scientists believe that these kinds of flares are associated with so-called ‘hot spots’, hot gas bubbles that orbit very fast and close to the black hole.

According to the Polish astronomer, such flares were so far only clearly present in X-ray and infrared observations of Sagittarius A*. Now we are dealing with radio observations

The research group members think that hot spots observed in both cases are manifestations of the same physical phenomenon. As infrared-emitting hot spots cool down, they become visible at longer wavelengths, i.e. radio waves.

Professor Monika Mościbrodzka from Radboud University in the Netherlands said they had found strong evidence for a magnetic origin of these flares. Scientists have already suspected that these flares could come from magnetic interactions in very hot gas very close to Sagittarius A*. The new data will be very helpful in theoretical analyses and give a clue about the geometry of the process

They now hope to be able to directly observe the gas clumps orbiting even closer to the black hole with the Extremely Large Telescope (ELT), currently built by the European Southern Observatory (ESO).

The paper describing the results of the research project appeared in the scientific journal Astronomy & Astrophysics.