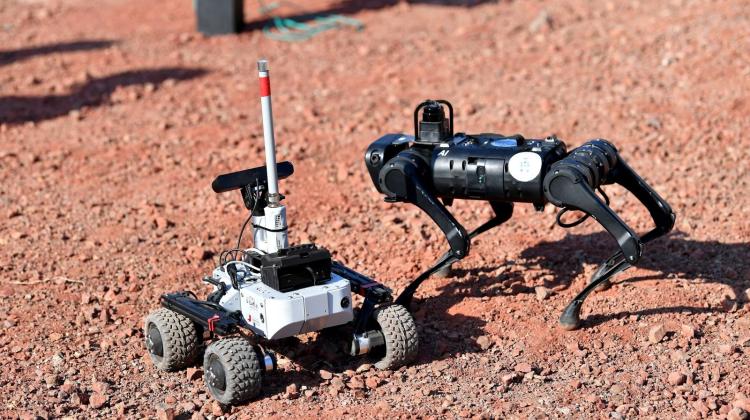 11.09.2021. Rovers presented during the European Rover Challenge on the campus of the Kielce University of Technology. PAP/Piotr Polak

Kielce University of Technology’s ‘Impulse’ team has taken first place in the on-site competition at the seventh edition of the European Rover Challenge.

The European Rover Challenge (ERC) is a prestigious competition of Martian robots built by student teams. Last weekend, 37 teams from over a dozen countries competed on a specially prepared track on the Kielce University of Technology campus. This year, the teams competed in two formulas - on-site and remotely.

Daniel Włodarczyk from Kielce university said: “It is a great honour for us, because we put hundreds of hours of hard work into the preparations for this edition. The emotions were high until the last minute.”

First place in the remote formula went to the students from 'DJS Antariksh' from India.

In 2019, the Kielce team won the prestigious international Mars rover competition URC in the USA, and two years in a row (in 2018 and 2019) it took the top of the podium of the European edition of the Mars rover competition - ERC. Last year, the team had to withdraw from the competition because several people were in quarantine due to the pandemic.

Professor Zbigniew Koruba, Rector of the Kielce University of Technology said: “I am extremely proud of our students and doctoral candidates.

“Our rover turned out to be indestructible, despite the fall it managed to re-enter the track and complete the task. I think that this was also appreciated by the jury.”

Koruba added that the ERC competition is one of the most prestigious robotic events in the world, which is why he is glad that it is organized in Kielce.

The second place in the on-site formula went to the 'ITU Rover Team' from Turkey and the third t 'EPFL Xplore' from Switzerland.

This year, 20 teams competed remotely. The first place went to DJS Antariksh from India; the second to 'ERIG' (Germany) and the third to 'RoboClyde' (Scotland).

The team competed on a special track, the surface of which was inspired by a fragment of the volcanic plain of Mars called Elysium Planitia.

Łukasz Wilczyński, president of the European Space Foundation and the main organizer of the competition said: “The track was extremely difficult this year. Craters, solidified volcanic streams made an impression on the visitors on the one hand, and on the other they gave goose bumps to people who sat behind the robot controls and saw what was happening only through the camera.

“Despite the pandemic year, the ERC was back on track. We had a three-day program with science and technology demonstrations, lectures and debates with representatives of the most important space agencies. It attracted a lot of interest, which we are very happy about.”

This year's speakers included deputy head of NASA Robert Cabana and Dr. Tanya Harrison, who, during 13 years of work at NASA, was the first person in the world to receive and analyse thousands of images sent by Mars rovers.

The European Rover Challenge is the largest space event in Europe, combining an international competition of Mars rovers with scientific and technological shows.

The project is co-financed by the 'Social Responsibility of Science' programme established by the Minister of Education and Science. The event is co-organized by the European Space Foundation, the Special Economic Zone 'Starachowice' S.A., Świętokrzyskie Voivodeship and the Kielce University of Technology (PAP)