Remote learning is having a detrimental effect on school children, new research shows 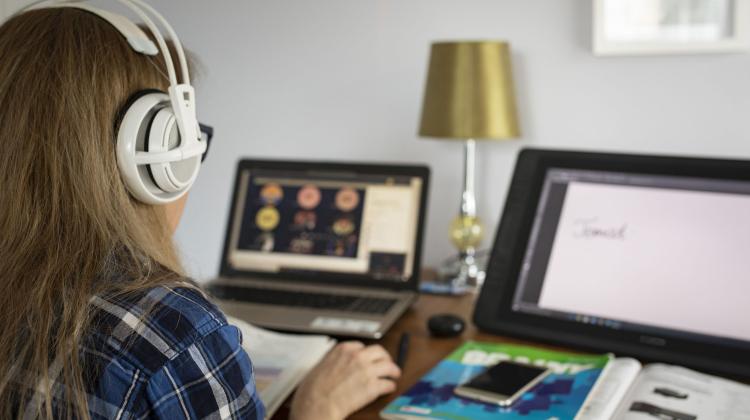 After nearly a year of remote learning, 20 percent of schoolchildren are showing symptoms of depression, and 65 percent consider remote lessons to have been at a lower level than in-person learning. Some also fear returning to school reality, according to researchers from Poland and Ukraine.

In September, 4.6 million Polish schoolchildren started a new school year. In the previous year, most of them learned remotely, away from peers and teachers. The effects of learning at home are the subject of many research projects with researchers wanting to find out, for example, whether the problems and difficulties of young people could have deepened during the lockdown.

A team from Poland and Ukraine led by Dr. Piotr Długosz from the Pedagogical University of Krakow checked how remote learning affected the psychological condition of schoolchildren from both countries, and what could make their return to school after many months of remote education difficult. The research was carried out using a computer-assisted personal interviews (CAPI) in the houses of randomly selected respondents. 1,000 Polish schoolchildren from older classes of primary schools and high schools were examined, as well as 1,022 schoolchildren living in Ukraine. Schoolchildren came from various social classes.

Dr. Długosz said: “Preliminary results indicate that the pandemic and transition to remote education can lead to a deterioration in the mental and physical health of adolescents. They also show that after nearly 1.5 years break from traditional school, students realized the shortcomings and are falling behind due to online lessons. In view of another lockdown, this is very worrying, because on the one hand students are aware of having fallen behind, and at the same afraid of the requirements of teachers and school, and on the other hand they are terrified that remote learning may soon come back and their school and life chances can be destroyed.”

He added that of those taking part in the study, for 33 percent of them it was a positive experience, for less than half (46%) - a negative one, and every fifth student could not evaluate it. But 65 percent believe that remote lessons are taught at a lower level than in-person lessons.

The survey also shows that only one-in-three students did not have any difficulty understanding the content taught by teachers during online lessons. As many as 37 percent students stated that tutoring would allow them to better understand the material from the lessons.

Remote learning also promotes negative habits. These include cheating during tests and using the help of other household members. As many as 67 percent of students admitted to doing that.

Another 40 percent of schoolchildren are afraid of the requirements that teachers will have of them. Every third student is also concerned about the nuisance related to getting up early and commuting to school. The same number claim that their motivation to learn has decreased, and for 29 percent changing the existing rhythm of life and adapting to school requirements is a problem. Every fourth student is aware of the low level of knowledge obtained during online education.

The results also showed that 20 percent of schoolchildren showed symptoms of depression. An SWLS (Satisfaction with Life Scale) study shows that 15 percent of students have no satisfaction with life. Every fifth student declared that they would like to use the help of a pedagogue or a psychologist at school.

Dr. Długosz said: “According to almost two-thirds of those surveyed, remote learning would be the worst thing that could happen. Another year lost, no contacts with peers, no knowledge and being locked up in the house again.” (PAP)