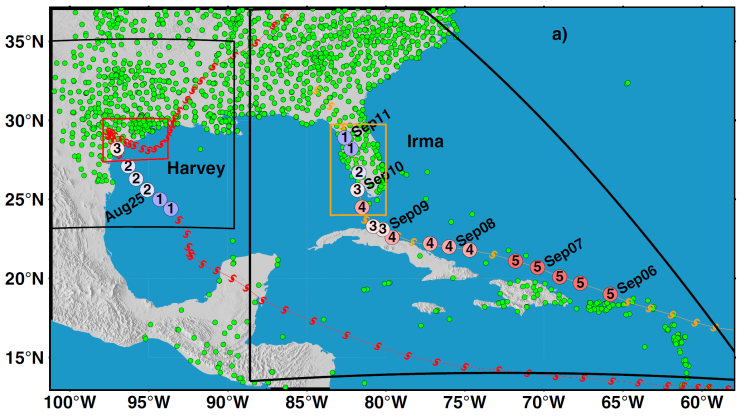 At least six hours before a hurricane hits the coast, GPS system observations make it possible to predict its path on land, says new research.

An international team of scientists used changes in the content of water vapour in the atmosphere determined by GPS observations to monitor and predict the path of a hurricane. They verified their research methods for hurricanes Harvey and Irma that hit the east coast of the United States in 2017.

Dr. Anna Kłos from the Faculty of Civil Engineering and Geodesy of the Military University of Technology said: “The GPS satellite positioning system allows us to monitor changes in water vapour content in the atmosphere by determining the signal delay between satellite and the receiver path. These values have been used in numerical models of weather forecasts and in analyses of possible climate changes.”

Hurricanes are among the greatest hydrometeorological threats and cause huge damage on the coasts they hit. In recent years, they have been more frequent and stronger. Increased evaporation over the oceans contributes to their formation.

Kłos said: “Meteorologists try to predict the occurrence and intensity of cyclones, but the reliability of these predictions becomes more complicated when the mechanisms causing the cyclones are not fully known. The quality of forecasts has improved significantly with the increase in the number of observations collected by networks of ground stations.”

The researcher estimates that 2017 was one of the three most hurricane-intensive years in the last 100 years. As many as 17 cyclones formed during the 2017 tropical cyclone season, 10 of which instantly turned into hurricanes with an unusually long lifespan, and six became powerful hurricanes (Gert, Harvey, Irma, Jose, Lee and Maria). Hurricanes Harvey and Irma were category 4 hurricanes that caused more rainfall along the Gulf of Mexico and the east coast of the United States than any other storm of that season. On August 25, 2017, Hurricane Harvey devastated much of Texas. Days after Hurricane Harvey, Hurricane Irma hit the Antilles with unprecedented force on September 6, 2017, and than Cuba and Florida on September 9 and 10.

The article 'Monitoring and prediction of hurricane tracks using GPS tropospheric products' appeared in the journal GPS Solutions. The members of international group of authors (in the order given in the journal) are: Y.G. Ejigu, F.N. Teferle, A. Kłos, J. Bogusz, and A. Hunegnaw.