Researchers create the most complete catalogue of extragalactic objects to date 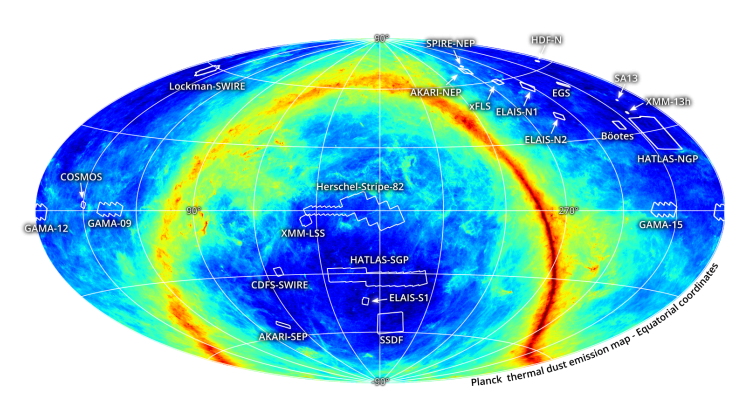 An international team of researchers has presented the most complete catalogue of extragalactic objects to date, covering an area of over 3 percent of the full solid angle of the sky and containing 170 million sources.

Named the Herschel Extragalactic Legacy Project (HELP), the catalogue covers 23 well-defined and studied areas of of the sky, such as the Cosmological Evolution Survey, COSMOS.

It contains 170 million sources, for which photometric data from a wide spectral range of the electromagnetic wave, from the optical part of the spectrum and even ultraviolet to remote infrared, were collected, grouped and standardised.

The first edition (Data Release 1) is already publicly available, and in addition to photometric data along with a long infrared from Herschel SPIRE, the collected objects contain calculated photometric redshift values and their physical parameters, such as a star mass, the pace of stars formation in the galaxy and the overall brightness of the galaxy in infrared.

The catalogue is also available through the Virtual Observatory tools, meaning the objects are available for user analysis almost immediately.

The project HELP will help many scientists in statistical analysis of galaxies in the whole sky. As the only such large catalogue of complete, publicly available photometric data, it is a laboratory to study the Universe in the early stages of evolution.

At the same time, it contains unique objects, very rarely encountered in the universe. It was during the analysis of HELP data that the authors of the project discovered a super massive black hole in the galaxy that existed 1.4 billion years after a the Big Bang. HELP was also used as a base directory for the LOFAR (Low Frequency Aray) observations.

The authors plan to update the catalogue with new observation data as needed. They have also shared the software necessary for creating such a catalogue. All programs and data used in the project are publicly available in the Open Source system.

Professor Seb Oliver from the University of Sussex is the lead investigator in the HELP project, and the Polish representative is Dr. Katarzyna Małek from the National Centre for Nuclear Research in Świerk.

She said: “In the HELP project, I am a team leader responsible for estimating physical parameters of all 170 million published galaxies.

“My main task was to model their energy spectra. Currently, after the publication, along with a team consisting of Mahmoud Hamed and Gabriel Riccio, doctoral candidates from the National Centre for Nuclear Research and the Institute of Nuclear Chemistry and Technology Doctoral College, we study the properties of the HELP galaxies with strong emissions of infrared radiation.”

The project was funded by the European Commission Research Executive Agency REA. Polish research on the properties of the observed galaxies, in particular on the physics of dust attenuation in galaxies, are financed by the National Science Centre as part of the ASTROdust project.