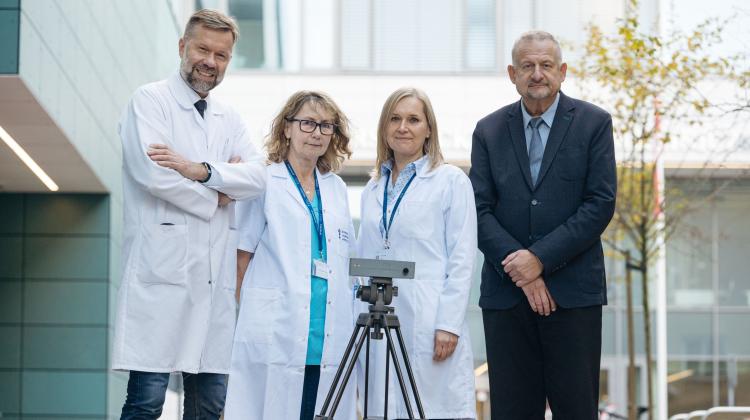 CyberRadar, a contactless device enabling safe breath monitoring in patients, has been developed by scientists from the Gdańsk University of Technology and the Medical University of Gdańsk. The device can help medics in the fight against COVID-19 and in diagnosing people with respiratory and circulatory problems.

Head of the Gdańsk University of Technology Multimedia Systems Department, Professor Andrzej Czyżewski, said: “CyberRadar is a small device that can be placed anywhere in the doctor's office or next to the patient's bed. It has a microwave sensor hidden in a plastic housing, and a sensitive camera for detecting the position of the patient's eyes and arms and chest +positioning+. The patient's respiratory and circulatory data are displayed on the built-in screen.”

The device has already passed the clinical trial stage with several dozen patients taking part. They included both healthy and sick people, for example with hypertension and other chronic diseases. CyberRadar was also used to examine people hospitalised at the Department of Hypertension and Diabetology of the University Clinical Centre in Gdańsk.

Czyżewski said that the clinical trial has shown that CyberRadar is a fully effective device, “replacing contact devices', such as respiration belts that require direct handling and frequent disinfection.

“As a result, CyberRadar can be a fully effective and safer alternative for medical personnel diagnosing and treating patients.”

In the case of another large wave of the SARS-CoV-2 pandemic, CyberRadar could be widely used to counter its effects.

The device could be used  to monitor patients diagnosed in A&E departments, hospitalised, those with asymptomatic COVID-19 in home quarantine, and in the future and with broader application also in telemedicine, both in patients with suspected infections and those under the care of specialist clinics (mainly internal medicine).

The invention may also be used after the pandemic is defeated to diagnose and monitor (also at home) patients with heart failure, lung disease or after a stroke, and to detect breathing abnormalities during sleep of the monitored person with much higher accuracy than devices currently available on the market.

According to Professor Krzysztof Narkiewicz, head of the Department and Hypertension and Diabetology of the Medical University of Gdańsk, who also contributed to the development of the device, CyberRadar could also be used in future scientific research combining technical science with medicine.

He said: “It enables the examination of a large group of patients, also in scientific research: through reliable assessment of the respiratory rhythm and pattern, it could be used to study the regulation of the cardiovascular and respiratory systems.”

CyberRadar was presented in October at the 'Polish Health' Congress in Warsaw.

The development of CyberRadar is the result of Professor Andrzej Czyżewski's team securing a grant from the 'Curium-Combating Coronavirus' programme introduced at the Gdańsk University of Technology in spring 2020 as part of the 'Excellence Initiative-Research University' programme.

The aim of the 'Curium-Combating Coronavirus' programme is to broaden the knowledge on the understanding of the mechanism, methods of diagnosis, treatment and prevention of the spread of COVID-19, as well as the use of IT tools in this area.

The CyberRadar project was also supported by a grant awarded by the Rector of the Medical University of Gdańsk to Professor Krzysztof Narkiewicz's team. (PAP)