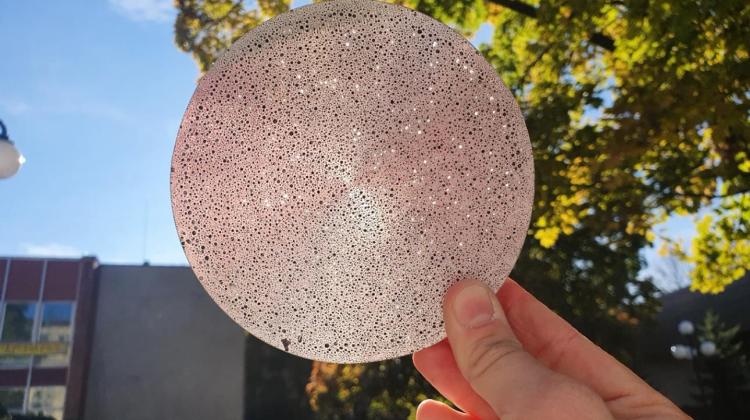 Gasars are lightweight and durable materials that make it possible to increase the strength of the component while also reducing weight. This is an important property in the aerospace industry. Photo from press release

Gasars are ultralight, durable, they absorb sounds, energy, damp vibrations, and conduct higher temperatures well. These new materials developed in Poland by scientists at the AGH University of Science and Technology in Kraków are desirable, for example, in the aerospace industry and can contribute to protecting our planet from climate change.

Gasars, also referred to as lotus-like structures or DioPoMats, are new materials containing a variety of substances seemingly difficult to mix, for example metal and ceramics with gas.

Gasars’ creator Professor Jerzy J. Sobczak said: “In our case, it is magnesium and hydrogen. These materials are remarkable; they contain up to 70 percent hydrogen.”

Hydrogen is the most abundant element in the universe (three-quarters of the chemical composition), and with helium it accounts for more than 99 percent of the entire Earth and extraterrestrial visible matter.

Sobczak told PAP: “Gasars are not lighter than air. They may have lower density than water, but, in theory, the very idea of creating a metal-gas system in the form of so-called syntactic foams allows us to theoretically consider materials lighter than air.”

But he added that producing gasars “at this stage, it is quite dangerous.”

He said: “It involves injecting hydrogen, a combustible gas, into liquid metal at high temperature. Modern technology allows you to do this safely, using a mixture of other, less explosive gases.

“During the solidification, gas is allowed to slowly escape in a controlled manner, for example as small diameter capillaries or tiny bubbles. And the capillaries are formed where and how we want them to, thus forming a spatial mesh of tubules or other shapes of pores, and their distribution within the metal structure is controllable.”

Gasars can be used as lightweight structural materials, the radiation or impact energy absorbers, fuel atomisers/mixers, heat sinks, and even as medical implants and other 'replacement parts' for humans. They are currently used as filters in the chemical industry, insulin filters in medicine, parts of missiles and jet engines.

The aerospace industry is interested in using gasars, for the construction of hulls of space vehicles and components of rocket engines because “they are light, and secondly, they are sufficiently strong, thirdly, if they are based on ceramics, they are very resistant to high temperatures,” Sobczak said.

He added: “The only effective method of space debris disposal, for now, is to bring it to Earth, to the denser parts of the atmosphere. When burnt, things made from traditional materials leave harmful, environmentally unfriendly products, which can do a lot of harm after falling to Earth.

“Gasars have this property that when returning to Earth from space, not only there is less of them, they virtually disappear.”

The European Space Agency, with which the Sobczak's team worked in the past, also recognised the need to produce more gasars, including the so-called hybrid gasars containing other monolithic, highly porous an ultralight materials. Prof. Sobczak said: “We need such construction materials that will be considered comprehensively. Ones that not only can be used in outer space, but during the return to Earth, sometimes an unexpected, emergency return, do not cause more damage leading to climate change.”

He continued that problems with gasars include production, theoretical deficiencies concerning a clear interpretation of the nature of high-temperature phenomena occurring during crystallization, and the proper selection of materials for the construction of the gasar reactor, including a melting crucible and crystalliser.

According to the Ukrainian school of gasars, the formation of gasars is the effect of thermodynamic changes, a gas-eutectic reaction, hence the name gasar: gas and armirowat' (to reinforce). The other, Japanese school claims that it is a simple evolution of gas at the crystallization front. “We need to know the real mechanism of gasar formation, we need to know the theory well. Then we can really simplify the technology,” Sobczak said.

Work on gasars was carried out for the first time in the 1970s in the Ukraine. Since the early 1990s, it intensified in other centres around the world, including the US, Germany, Japan and China, where scientists are working on a better and wider practical application of these materials.