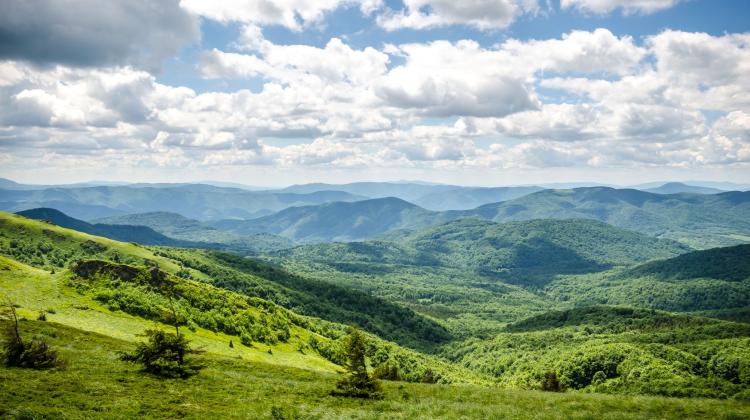 Subterranean erosion in the Bieszczady Mountains is greater than expected say geomorphologists, soil scientists and geophysicists.

Dr. Anita Bernatek-Jakiel from the Department of Geomorphology at the Institute of Geography and Spatial Management of the Jagiellonian University said: “Over 10 years ago, I read an article from the 1970s that included photos of Bieszczady meadows with large sinkholes, several meters in length and one - two meters deep.

“Since then, no research had been conducted on the subject. It bothered me that these large forms had not been examined in detail by anyone. I wondered why such sinkholes were forming, how big they could be. Therefore I invited soil scientists and geophysicists to cooperate and we started working.”

The process that leads to the formation of sinkholes is called soil piping or piping erosion. It is a kind of underground erosion that involves washing soil particles by the water seeping below the surface. As a result of the removal of material, underground pipes form. Their existence is only revealed after they collapse. This leads to the formation of depressions, suffosion sinkholes, and sometimes small, several meters long valleys, which arrive at the pipe inlet (steephead valleys). This process changes the shape of the slope, flattening the convex sections. The resulting subsidence changes water flow on the slope. Gradual collapse of the pipes leads to the formation of new valleys or extends existing ones. Locally, these changes can be very significant.

Dr. Bernatek-Jakiel said: “We first gathered detailed information about the locations, amounts and sizes of the terrain forms we could find. In various places in Bieszczady we found more than 500 sinkholes formed by pipe collapse. The diameter of the pipe was approx. 0.3-0.4 m, most of them were located at a depth of approx. 0.7-0.8 m, up to a maximum of 2 meters below the surface. The scale of the process surprised even some reviewers who initially doubted that this process was taking place in Bieszczady.”

Suffosion is most often discussed in the context of loess areas or areas in semi-arid climates, while Bieszczady Mountains have brown soils that have not been considered susceptible to this process.

The scientists studied the properties of soils conducive to the formation of suffosion pipes. It turned out that the important factors included a high dust content, well-developed soil structure, high porosity and bioactivity (a large number of hollow channels dug by the animals living in the soil).

Bernatek-Jakiel, who won an award from the Association of Polish Geomorphologists for the best doctoral dissertation in the field of geomorphology in 2017-2020 said: “Such an increased biological activity in the soil most often occurs in meadows and pastures, and we were also finding these form in forests.”

Her colleague, Dr. Michał Jakiel from the Laboratory of Physical Geography at the Institute of Geography and Spatial Management JU, noted that sinkholes occur mainly in forests that have emerged in the last decades. He said: ’We decided to analyse changes in land use since the mid-19th century to see what the previous land use was in the areas where today we find the suffosion pipes and sinkholes.

“Our analyses show that these forms emerge in places permanently used as meadows and pastures, and in areas where meadows used to be, and the forest entered after World War II.”

According to the researcher Bieszczady are a special place in this respect. In the past, the area was extensively used and developed by man. As a result of resettlement, including the Operation Vistula in the years 1947-1950, it was almost deserted.

As part of their study, the researchers also decided to find out how much soil material is removed from these pipes, and the rate at which sinkhole and well sizes change.

Dr. Bernatek-Jakiel said: “We conducted monitoring and using detailed geodetic measurements, we determined that the soil loss varied significantly in individual years, reaching maximum values of nearly 28 tons per hectare per year (t/ha/year), and on average - 1,34 t/ha/year. Such values are comparable to surface erosion that occurs on the Carpathian slopes used as arable land. It turned out that in Bieszczady, meadow soil loss can be almost as large as in a potato field in the Carpathian Foothills.”

In addition, thanks to cooperation with geophysicists, the researchers used ERT and GPR to check what was happening under the surface. It turned out that in some places the suffosion pipes were two times longer than estimated based on surface surveys. This means that the soil loss can be much larger than we assume, they summarize.

Suffosion leads to soil disruption and damage, therefore affecting the reduction of the surface used by man. The existence of pipes and surface subsidence over them hinders management. In places affected by suffosion, there is an intense erosion of slopes, even in areas used as meadows that have not been perceived as areas at risk of soil erosion. Suffosion research should be continued not only to better understand this process, but also to prevent its in areas used by man.