Katowice to be European City of Science 2024 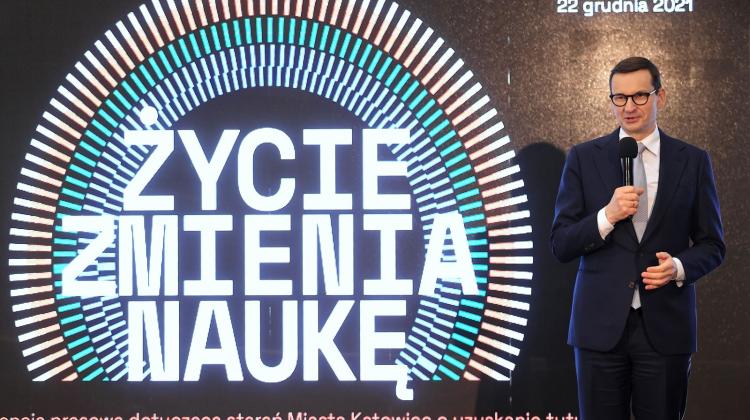 22.12.2021. Prime Minister Mateusz Morawiecki during a press conference on granting the title of the European City of Science 2024 to Katowice. The head of the Polish government is visiting the Silesian Voivodship. PAP/Andrzej Grygiel

Katowice has become the first city in Central and Eastern Europe to be awarded the European City of Science 2024.

The prestigious title granted by EuroScience, an organisation for the support and promotion of science and technology in Europe, whose members are representatives of 75 countries, also involves the organization of the EuroScience Open Forum 2024.

The bi-annual event is devoted to research and innovations crucial for the world's future. ESOF Katowice 2024 will be one of the most prestigious scientific and technological events in the world.

Prime Minister Morawiecki congratulated the authorities of Katowice and Silesian universities saying: “Like a lens, Katowice focuses the great technological, industrial projects and aspirations for the future.

“I am convinced that this title will be a milestone for Katowice on the way to the implementation of the strategy for the entire Silesia, that science, including Polish science, Silesian science, will contribute to the development of Poland and Europe.”

He added that the potential of Silesian universities had not been sufficiently used, although Katowice and the entire region were a 'seabed' of science.

One of the initiators of applying for the title, Rector of the University of Silesia in Katowice Professor Ryszard Koziołek described the news ‘wonderful’. He said “As a result of many months of efforts of many people from our universities, the City Hall, friends from Poland and Europe, Katowice will be the European City of Science, the informal capital of European science. We could compare it to the right to organize the European scientific games that would last a whole year.”

Katowice mayor Marcin Krupa added: “This is a great challenge with a lot of investments. But just as we benefited from our efforts for the title of the European Capital of Culture, now we can showcase our science, which is a very important element of the entire region, not only Katowice.”

The title of the European City of Science is awarded to deepen the changes that accompany social transformation towards science. The goal is to show the wealth and diversity of the European scientific landscape and support self-education, scientific integration, interest in science among younger generations and the development of European research without borders.

Katowice is the first city in Central and Eastern Europe to be granted this title. The title was previously held by: Leiden, Tirest, Toulouse, Manchester, Copenhagen, Dublin, Turin, Barcelona, Munich and Stockholm. (PAP)