Treasure trove of ‘the elite’ found in 1,000-year-old grave 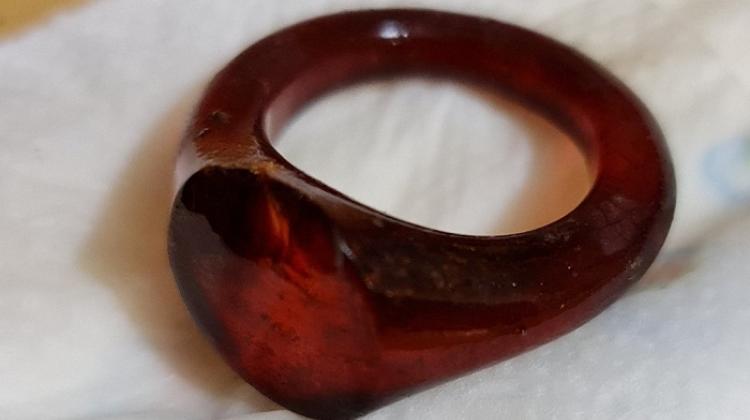 A ring from the elite grave after cleaning. Credit: J. Sikora

Archaeologists have uncovered an ‘elite’ grave from the 12th century during excavation work in Northern Poland.

The discovery in the village of Ostrowite included two amber rings, a bronze bowl, and an iron knife in a leather sheath with bronze fittings.

Distinguished from previous graves discovered at the site by its size and rich equipment, scientists say they believe the items belonged to elite members of the then local Christian community.

Team leader Dr. Jerzy Sikora from the Institute of Archaeology at the University of Lodz said: “The deceased was most likely a representative of local, Pomeranian elites.

“It is striking that there are two identical rings, symmetrically arranged relative to the axis of the body. Amber ones, no less. The situation is quite unique. I do not know a similar burial.”

He added that the size of the grave, a wooden structure the size of a small house, and the rings were probably associated with symbols of power.

Sikora said: “Amber can be related to either mediation in trade in this raw material, or control over local deposits. During the modern age, amber was extracted in the area of Chojnice.”

In addition, archaeologists found a bronze bowl by the skeleton’s feet, inside of which were fragments of wood thought to have belonged to the man’s coffin.

The deceased was also had an iron knife in a leather sheath with bronze fittings and two coin pieces. On the surface of the bowl and the knife sheath the archaeologists noticed fragments and imprints of fabrics.

Under the bowl there were small fragments of leather, probably remnants of the deceased's footwear, preserved thanks to the preservative effect of copper oxides.

In previous years, archaeologists made several similar discoveries in the area, with Dr. Sikora saying that such graves were associated with emerging local elites. Similar graves are known, for example, from Usadel and Usedom in Mecklenburg (Germany) or Cedynia in Poland.

Ostrowite, where the latest discovery was made, was an important local centre of power, which functioned from the 11th to the 14th century.

Dr. Sikora said: “It was a fairly extensive complex with a settlement on a nearby island, which at least from about 1160 was connected to the shore with a wooden bridge, but most likely functioned earlier.”

On the eastern shore of the lake there were two cemeteries. Trade was an important aspect of the functioning of the settlement, as evidenced by the earlier findings of archaeologists, including about 20 weights for balance scales, coins (including Western European, mainly Saxon ones, as well as numerous imitations) and a number of imported items, such as bronze bowls. The discovered items indicate trade with the areas of Pomerania, Greater Poland, as well as Scandinavia, Western Europe and Ruthenia.