Green is in the air 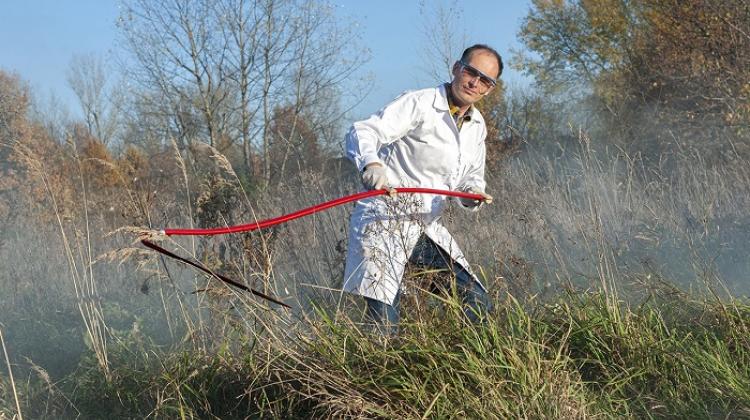 For some people, mowing grass is associated with a pleasant smell, while it becomes an intriguing research topic for others. All because of the volatile compounds released from plants. Credit: Institute of Physical Chemistry, Polish Academy of Sciences

Recently, researchers from the Institute of Physical Chemistry, Polish Academy of Sciences, in collaboration with TROPOS, Leipzig and NIC, Slovenia focused on revealing the fate of these volatile biogenic compounds in the atmosphere, investigating their lifetime and the processes they undergo.

Earth's atmosphere is full of various gases. Besides nitrogen, oxygen, and carbon dioxide in the troposphere, it also contains other molecules or trace gases that can be neutral, beneficial, or harmful to our health. Whence do they come? There are many sources of these volatile species, biogenic such as plants and anthropogenic such as vehicular emissions. Under environmental conditions like UV light and the presence of other molecules or solid particles, they can undergo degradation or transformation into entirely different molecules. As an effect, they become secondary pollutants of the atmosphere. Recently, researchers from the Institute of Physical Chemistry, Polish Academy of Sciences, in collaboration with TROPOS, Leipzig and NIC, Slovenia focused on revealing the fate of these volatile biogenic compounds in the atmosphere, investigating their lifetime and the processes they undergo.

The only component of air that is necessary for breathing is oxygen. Still, the atmosphere is full of many other gases, and their composition varies depending on many factors. It contains aerosols made of pollutants, gases, and tiny droplets. What are their origins? The obvious answer is the industry – industrial facilities generate tremendous pollution. Another source would be natural processes taking place in the air. Indeed, both answers are accurate, but other sources of these chemicals exist. One of them is plants, which release many volatile compounds. When a plant experiences a sudden temperature change, biotic or mechanical stress like being bitten by an insect or cut while mowing, many different molecules are released as a natural mechanism protecting the plant from environmental conditions. Some other compounds protect plants against diseases. The concentration of those released volatiles in the air is tremendous, and each molecule can undergo various chemical processes, giving origin to a set of other chemicals.

The most common component of these processes is the formation of free radicals under the influence of UV light or chemical reactions. Furthermore, volatiles in the air can bind to some solid particles like dust. When adsorbed onto the surface, they can transform into even more complex compounds, forming secondary organic aerosols that are still too little explored. Luckily, the scientists from the Institute of the Physical Chemistry of the Polish Academy of Sciences led by prof. Rafał Szmigielski followed that research branch showing the unknown face of atmospheric aerosols. They identified new sources of some organic aerosols, indicating the role of plants. Their research revealed how fast these compounds transform in atmospheric aqueous media, giving the origins to new organic aerosols.

Once the volatile organic molecules partition into atmospheric liquid such as fog and clouds, they can be transformed into entirely new compounds with different structures and reactivity. Their stability depends on many physiochemical properties and environmental factors. Researchers were curious how long the particular compounds lived in gaseous, aqueous, or multiphase systems and presented the kinetic studies that present their lifetime in different experimental conditions.

Green leaves volatiles (GLV) do not sound scary, mainly because of their natural origins. At the same time, annually, even 1 billion kilograms of various compounds can be released into the atmosphere. The level of GLVs in the atmosphere is directly linked to human activity, dramatically impacting the air quality in various areas. They are also linked with pollution. The solid particles in the air become an ideal platform to condense GLVs and spread them in the atmosphere. The more we know about GLV reactions, the better we can estimate their role in air pollution and particles escalation.

"In this work, we explored for the first time the aqueous-phase reaction kinetics of the three GLVs—1-penten-3-ol, (Z)-2-hexen-1-ol, and (E)-2-hexen-1-al —with tropospheric radicals •OH, SO4•–, and NO3•." – claims the first author Kumar Sarang.

Due to the growing pollution and amount of many volatiles in the atmosphere, many studies focus on investigating the air quality and theoretical modeling to predict the spreading and transformation of volatile pollutants in the air globally. The models used to predict the natural processes in the air are highly complex, yet, even a tiny change in the input for the model can drastically affect the resulting output. For that reason, it is essential to understand and fully show the transformation of the compounds released into the atmosphere.

Currently, not many models include the GLV activity in the air. Still, even a small development in the understanding of GLVs may significantly improve the quality of atmospheric modeling studies. Why? Because the atmosphere "lives" by itself, and we are a long way from possessing an ideal model that would allow us to predict the atmosphere's behavior accurately. To do so and improve current atmospheric models, we have to add more "bricks" to build a better model of the atmosphere.

Prof. Szmigielski says - "Our main goal was to determine the rate constants and evaluate the atmospheric significance of the reactions. The examined GLVs may be effective precursors of aqueous SOA formation, even though they are moderately water-soluble and intermediary volatile."

Researchers from IPC PAS carried out these studies in collaboration with scientists from Leibniz Institute for Tropospheric Research (TROPOS), Leipzig, Germany (Prof. Hartmut Herrmann, Dr. Thomas Schaefer, and Dr. Tobias Otto) by studying the reactions of GLVs using laser technology at TROPOS. The vital collaboration included Prof. Irena Grgic from the National Institute of Chemistry, Ljubljana, Slovenia, a co-supervisor of the first author Kumar Sarang. That made it possible to deliver data about the rate of particular chemical reactions of some organic molecules and their reactions with free radicals present in the atmosphere. Thanks to that fruitful collaboration, it was possible to estimate the lifetime of GLV compounds in the atmosphere after being released from green leaves.

GLVs transformation and lifetime in the atmosphere strictly depend on the phases. Why? The water present in the atmosphere tends to form tiny droplets having a tremendous capacity to dissolve many compounds. Many atmospheric compounds can react in the water much faster than in the gas phase. Researchers mimicked the atmospheric conditions in the laboratory to get information on what happens to certain GLV in the air in the presence of many radicals.

"The aqueous-phase GLV reactions appeared negligible in deliquescent aerosol and haze water but not in clouds and rains. The atmospheric lifetimes of GLVs decreased from many days to hours with increasing liquid water content and radicals' concentration." – remarks the corresponding author Dr. Krzysztof J. Rudziński.

Not everyone is aware of the atmospheric chemistry covering processes just above the ground and in the upper atmosphere layers. Still, that field is significant to creating more accurate models of the atmosphere and understanding the health impacts of compounds suspended in the air.

Additionally, the authors also present the review about the GLV based chemistry in the atmosphere and its significance published recently on 2nd December in Atmosphere (MDPI), pointing out the importance of the exploration of the GLV field.

The studies performed by researchers from IPC PAS bring us closer to understanding the processes in the air and point out that we cannot neglect aqueous phase reactions, also when they include GLVs. Their research shows what happens to the volatiles released from plants when they absorb into the droplets and adsorb on solid particles suspended in the air. Researchers performed a series of photochemical experiments revealing the processes that GLVs undergo in the atmosphere. The most important result of this research is the determination of rate constants and lifetimes of GLV as new aerosol sources in the atmosphere. Thereby, this research proves the importance of those molecules in modeling the atmosphere, bringing us closer to better predicting atmospheric phenomena, even the understanding of climate change.  This research was published on 28th September 2021 in Environmental Science & Technology.