Scientists investigate lake ‘varve’ research to learn about the past 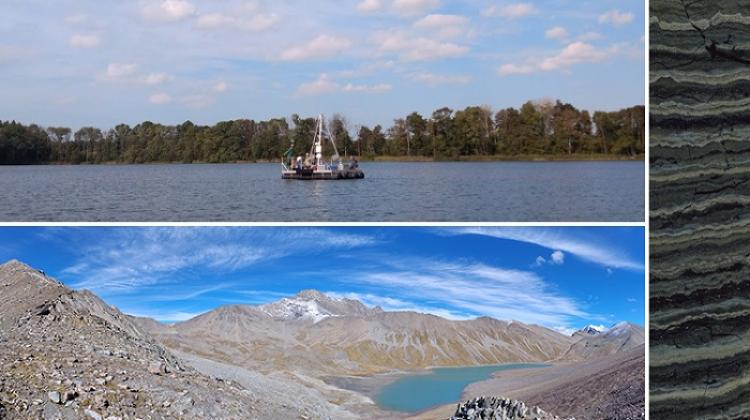 To understand the influence our ancestors had on Earth’s geographical landscape, scientists from the University of Gdańsk have carried out analyses of so-called varves (laminated lake sediments) in Lake Żabin in Masuria.

How can we understand the past of the Earth and the influence of our ancestors on the geographical environment? How does one describe space and time, going beyond the framework of historical sources? To answer these questions, geomorphologists and palaeogeographers explore numerous natural archives.

Dr. Maurycy Żarczyński from the Department of Geomorphology and Quaternary Geology, Institute of Geography at the University of Gdańsk said: “These exceptionally delicate structures form as annual increments, analogously to tree rings. They are among the most valuable and most accurate registers of past environmental changes, because by counting the sediment layers, we can go back to the past with unparalleled precision and read the most subtle information about the environment hundreds and thousands of years ago.”

He continued: “A particularly valuable object of our research is Lake Żabin, located in the Masurian Lake District. Based on its sediments, it was possible to trace changes occurring in the geographical environment in an exceptionally diverse time horizon. The lake is a natural testing ground, which - thanks to decades of observations - has allowed us to better understand the exceptionally complicated sedimentation process.

“Research has shown that different components of deposits can be used to track not only climate change, i.e. perennial conditions, but also a meteorological situation on a weekly scale. To put it simply, we can say that we are approaching the reconstruction of weather changes based on geological archives.”

He added that a slightly more classic approach, based on sediment profiles, informs scientists about the past of the lake with extraordinary accuracy. He said: “In combination with precise time scale, this allowed us to use the lake sediments for numerous reconstructions of environmental changes over the last 1,000-2,000 years, and even 11,000 years. It was possible, for example, to reconstruct the influence of humans on the lake ecosystem, and in particular changes in vegetation, intensity of erosion and changes in processes occurring in the lake itself (more - HERE, HERE and HERE). Thus, we know that man has significantly influenced the environment and the ecosystem of today's Masuria for at least two thousand years. This complements the discoveries made by archaeologists with a natural perspective. The sediments were also used to demonstrate past climate variability in this area over the last thousand years (more - HERE).

Żarnczyński continued: “In recent years, we saw a significant development of research methods allowing to register changes in chemical composition of sediments on a scale of thousandth parts of the millimetre without interfering in their structure.

“Thanks to the extremely precise time scale, their use allowed us to compare the daily series of meteorological data from the last 50 years with the conditions of sedimentary formation year after year in the last 50 years (more - HERE). The exceptional accuracy of time scale also contributed to developing methodological aspects of dating varves (more on that - HERE) and searching for microscopic volcanic glazing. In the sediments in Lake Żabin, researchers found microscopic traces of volcanic eruptions in Iceland, Azores and even Alaska (more - HERE). In addition, precisely controlling the age of this lake's sediments allowed to improve radiocarbon (C-14) method of dating natural objects and processes using the innovative MICADAS technology (more - HERE).

“Analysis of varves is also an excellent example of science going beyond the borders of a single discipline.

“In our work, we often use analyses of historical and cartographic materials, such as pre-war and post-war maps, population censuses or information on agricultural practices. A combination of such data with chemical composition analysis and ecological indicators (zoo and phytoplankton and plant pollen) allowed us to demonstrate a significant impact of man on lake ecosystems over the past 200 years. Local influence turned out to have a dominant role in the process of varve formation. Thus, varves became another element of an international debate on the beginning of anthropocene - the age of human impact on Earth's geology and ecosystems (more - HERE). Another, similar example is the study, created in cooperation with historians and botanics experts, on the history of fire phenomena and the occurrence of droughts in the Suwałki Lake District, based on the varves from Lake Jaczno located in the Suwałki Landscape.”

By better understand the processes taking place in the environment today and in the past scientists are able to more accurately predict and estimate the trajectories of changes currently taking place in the environment, which gives a chance to counteract them and adapt to them. In addition to numerous studies on Polish lake sediments, the Gdańsk team also has its share in the studies of material from Georgia, Lithuania and even South America.

For his doctoral dissertation written on the basis of the analysis of Lake Żabin, Dr. Żarczyński received the 2020 Stefan Kozarski diploma awarded by the Association of Polish Geomorphologists.