Bacteria can be used to clean lakes and ponds 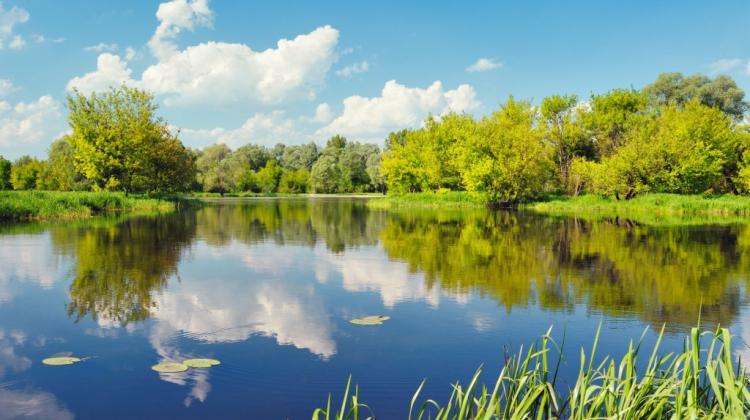 Innovative method for cleaning lakes has been developed by scientists from the Department of Ecology of Microorganisms and Laboratory of Water Conservation and Reclamation, Biological and Chemical Research Centre at the University of Warsaw, with the company Eco-Life System, under the supervision of Prof. Ryszard Chróst.

"This method consists in the introduction of bacteria previously isolated from natural water and soil environments into the bottom sediments and water of polluted reservoir. In aerobic conditions, the bacteria decompose the organic pollutants in water and sediments at a very fast rate. They process them into carbon dioxide and biomass, which in the food chain is ultimately eaten by fish" - said Prof. Chróst.

He emphasised that this method is innovative in Poland and in the world.

"Innovation of this method lies in the fact that it is environmentally safe, because it does not use any chemical compounds, but instead uses natural biological processes involving bacteria. Noticeable improvement in water quality may occur after 4-5 months" - the scientist explained.

Until now, shallow lakes and ponds were usually cleaned mechanically. Sediments were removed, and with them also collected pollutants. To improve the quality of the water, chemical compounds containing aluminium were also used. Aluminium would bind phosphorus compounds responsible for the excessive growth of phytoplankton and overgrowing lakes

"These methods are highly invasive and often ecologically disastrous for the lakes. In addition, the effects of such treatments become apparent only after 3-5 years, because only then the ecosystem begins to function again" - said Prof. Chróst.

He noted that an additional problem with these reclamation processes is the storage and disposal of sediments. Such treatments are expensive and cumbersome.

Representatives of Warmia-Masurian local governments are interested in using the biological method introduced by the Warsaw scientists: representatives from the commune of Biskupiec, who want to clean the lake Kraks Mały, and the municipality of Kętrzyn, to clean Lake Kętrzyn. The method may also be used in Sulejów Reservoir in the Łódź region, and in the pond in the spa and park complex in Nałęczów.

According to Prof. Chróst, many reservoirs, especially shallow lakes and ponds located in the cities and tourist towns, have been for many years and still are used economically. Several years ago, dumping wastewater and pollution collected from catchments into lakes was quite common.

Meanwhile, organic nitrogen and phosphorus compounds in wastewater result in a strong eutrophication of lakes that induces growth of plants and algae. "This has devastating consequences for water quality and environmental functioning of such degraded aquatic ecosystems" - said the scientist.

Every year in Warmia and Mazury residents and tourists watch the blue-green algae blooms. It is one of the consequences of the degradation of lakes. Bathing in such waters is dangerous, because blooms of cyanobacteria release toxins that may damage the nervous system and liver in humans. Lakes and ponds, where there is a mass appearance of blue-green algae, are also completely unsuitable for economic purposes; they can not be used to farm fish, nor as a source of drinking water.