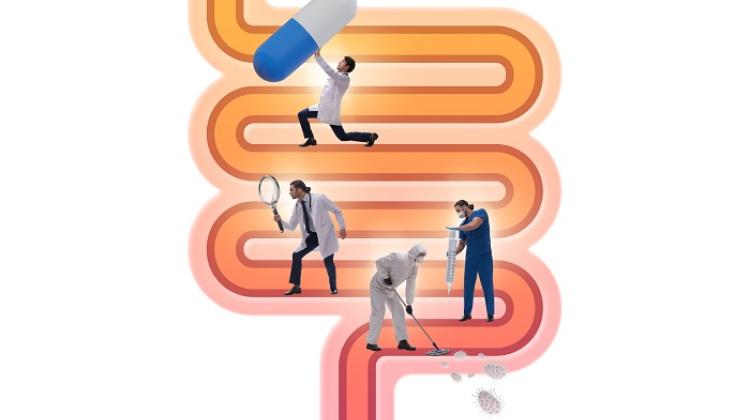 A solution that can serve as non-invasive support for medical diagnosis of gastrointestinal diseases has been developed. It is the result of the work of scientists from the Warsaw University of Technology and the Poznan University of Medical Sciences, who analysed the acoustic activity of the gastrointestinal tract.

The sounds coming from the intestines are a common phenomenon that reflects the activity of the digestive tract. Although their analogue analysis is difficult and extremely time-consuming, AI methods allow to process them quickly and efficiently. This makes them a useful tool for physicians to assist in the diagnosis of diseases of the digestive system, including the irritable bowel syndrome.

Professor Robert Nowak's team from the Artificial Intelligence Division of the Faculty of Electronics and Information Technology, Warsaw University of Technology, has developed an innovative solution that analyses the acoustic activity of the digestive tract to aid non-invasive diagnosis of gastrointestinal diseases. The study was a joint project of the Warsaw University of Technology specialists and doctors from the Poznan University of Medical Sciences. The latter collected data and tested the solution in a clinical setting.

'Manual detection of bowel sounds by doctors is expensive and time-consuming. For this reason, for medical purposes, it is important to develop a method allowing to automate this step', says notes Jakub Ficek, Professor Robert Nowak's student and the first author of the publication in the journal Sensors.

'Of the nearly eight billion people currently inhabiting the Earth, almost all emit and hear the sounds of the intestines', researchers from the Warsaw University of Technology explain. 'Rumbling in the stomach' is a common phenomenon. That is why since ancient times people have tried to use it in the diagnosis and treatment of various ailments of the digestive system from intestinal obstruction to diarrhoea.

In the 1960s, numerous projects started all over the world, aiming to develop technical solutions that could be used to record and analyse intestinal sounds. And while a few of them turned out to be reasonably effective, further progress was hampered by the lack of a standard methodology for use in the clinical setting and an enormous amount of data to be processed.

'Since gastrointestinal sounds are generated by bowel contractions, they naturally reflect its motor activity that is extremely difficult to assess directly', the authors explain. Currently, in order to measure it, doctors use fairly invasive and unpleasant methods, such as colonoscopy, administering isotope tags to the patient (orally or rectally), etc.

Scientists believe that bowel sounds can be compared to heart sounds, because both are closely linked to life processes. They are also emitted often (though not rhythmically), and they can be influenced by internal and external factors. Earlier studies show their big potential in the non-invasive diagnosis of irritable bowel syndrome, in surgery and in the study of gastrointestinal motility.

'When food travel through the intestines, it generates a large amount of quiet sounds. They are strongly distorted by other sounds, such as heart rate, noise generated by the respiratory system and blood flow, but if you filter out the interference, you can measure the amount of bowel sounds in a unit of time', explains Professor Robert Nowak, the research group leader. 'The result in a certain range is the norm, and any deviation suggests a disease, for example the irritable bowel syndrome'.

'This examination is completely non-invasive and painless', he adds. 'The recording is done at night to eliminate ambient sounds such as conversations, clothes rubbing, etc., and to obtain a sufficiently long sample for analysis. The patient has a microphone taped to the abdomen. This part of the study was carried out by our colleagues from the Poznan University of Medical Sciences. Then, we analysed the collected data'.

The scientist says that so far, despite many attempts, the analysis that could be used in clinical practice was not that simple. 'For one, nobody can afford to sit with the patient all night and listen to the stomach sounds. For the test to be reliable, a few hours long sample is really needed. In addition, previous algorithms could not handle processing such huge amounts of data', he says.

'Only now that we have sufficient computing power and artificial neural networks we can get a highly accurate result. And the result is the number of sounds per minute and the series these sounds occur in: single and rather steady, grouped and are interspersed with moments of silence', he says.

In terms of accuracy, the algorithm developed at the Warsaw University of Technology reached 97.7 percent accuracy, 99 percent specificity and 77.3 percent sensitivity with data set including 321,000 records.

'Our solution works as follows: we use artificial intelligence algorithms that choose parameters based on the analysed data. First, the signal processing algorithm removes interference with filters. Then, the recording is divided into frames short enough to contain a single sound. In the study case, the frame is 20 ms long, which means there are 50 frames per second. The algorithm based on an artificial neural network determines whether a given frame contains an intestinal sound or not. Finally, the computer analyses the decisions for all frames, organizes them statistically and this is our result. We present it to the doctor in this form', explains Robert Nowak.

'It is a support for medical diagnosis', he adds. 'The originator of the entire project is Dr. Jan Nowak from the Poznan University of Medical Sciences. He needed a solution to improve the diagnostic process'.

The professor emphasizes that students of the Faculty of Electronics and Information Technology were involved in the project. One of them, Jakub Ficek, whose engineering project was part of the discussed study, won 1st place in the 'Information Technology' category in the competition of diploma theses under the auspices of the Polish Chapter of IEEE 2021. Another author, Kacper Radzikowski, is a doctoral candidate at Waseda University in Japan.

'The main advantage of the presented approach is high quality in terms of accuracy, specificity and sensitivity', the authors of the solution conclude. 'There is no doubt that automatic identification and analysis of intestinal sounds will be used in practice'.