Space
This text can be copied
Karolina Duszczyk 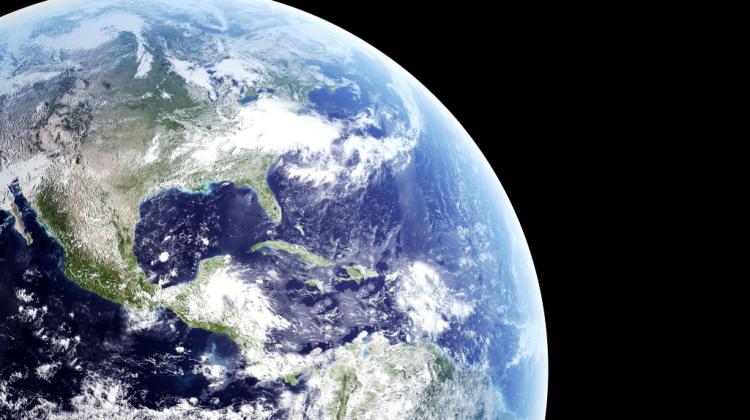 The Earth becomes more and more flattened, and it rotates so fast that the day becomes shorter. Will anomalies of artificial satellite movement help better understand the changes taking place in the oceans, glaciers, atmosphere, the Earth's crust and under the surface of the Earth?

Professor Krzysztof Sośnica explains this by studying the evolution of the Earth's gravitational field in the PLN two million EAGLE project.

The shape of the Earth is constantly changing, explains Professor Krzysztof Sośnica from the Institute of Geodesy and Geoinformatics at the Wrocław University of Environmental and Life Sciences. The Earth's gravitational field also keeps changing due to the forces affecting our planet.

According to the scientist, the Earth was gradually becoming more and more spherical (less flat) until 1997 due to the mountain building in Scandinavia and extensive areas in Canada after the last glaciation. This process was halted by melting glaciers in Greenland and Antarctica.

'From the beginning of the 21st century, we have been observing a reverse trend. The Earth is becoming increasingly flattened, because the pole glaciers melt and supply oceans, which raise their level around the equator. Changes in the shape of the Earth cause continuous changes in the gravitational field, in flattening, the movement of the centre of the planet (called the geocentre). They affect changes in rotational motion and the satellites orbiting the Earth', says Professor Krzysztof Sośnica.

As part of the winning project of the SONATA BIS 11 competition funded by the National Science Centre, Professor Krzysztof Sośnica and his team will study the evolution of the Earth's gravitational field in more detail.

CHANGES IN THE EARTH'S GRAVITATIONAL FIELD

The Earth's crust rises and falls by several dozen centimetres within one day due to the gravitational influence of the Moon and the Sun. Similar changes to the Earth's crust can be observed in the form of sea and ocean tides.

The Earth's gravitational field is associated with processes taking place in groundwater, the Earth's crust, oceans and glaciers. Over the last 40 years, various satellite missions have been used to study the ice cover variability in Antarctica and Greenland. However, most missions are rely on surface observations that measure the distance between the satellite and the ice or water surface.

ANOMALIES IN THE MOVEMENT OF ARTIFICIAL SATELLITES

The coordinates of the geocentre and the values of the Earth's flattening will be determined based on multiple sources based on various data and satellite and terrestrial techniques. Different data sources - satellite, geophysical and geodetic - will be integrated using machine learning algorithms and artificial intelligence. The researchers will study the influence of the Earth's gravity on the variation of the length of the day and the movement of the Earth's pole, and how the gravitational field changes affect the movement of artificial satellites and the GPS station positions on the surface of the Earth.

The observations of the changing gravitational field of the Earth allow to describe the movement of the masses in the Earth's system, including changes in land waters, ice cover, oceans and the atmosphere. These observations provide the necessary information on the global water circulation, changes in ocean surface currents, loss of glacier mass, raising sea level, surface load displacements, as well as many other environmental processes.

'By comparing the time recorded by nuclear clocks with the observations of the Earth's motion, we discovered that in 2020, the Earth's rotation was fastest since the start of measurements. On July 19, 2020, the full rotation of the Earth around its own axis lasted 1466 μs less than 24 h (1000 μs = 50 cm on the equator)', the scientist says.

'Since the invention of atomic clocks the Earth has not rotated so fast. It usually rotated slightly slower than full 24 hours, so leap seconds were introduced accommodate the difference between the atomic time and the rotation of the planet', he adds.

Recently, the Earth began to rotate much faster, which requires a scientific explanation. Changes in the Earth's motion result directly from the distribution of masses in the Earth's system, i.e. the gravitational field changes and the processes taking place in the atmosphere, oceans and inside the Earth.

The project is designed to explain the causes of anomalies that we observe in the Earth's rotation and link them to changes that occur in oceans, glaciers, the atmosphere, the Earth's crust and under the surface of the Earth. Thanks to the analysis of satellite data from the last 40 years, we will learn much more about climate changes and their causes, and the links between different processes taking place on, over and under the surface of the Earth.

Researchers working in the project will determine the value of the gravitational constant, the fundamental parameter necessary not only in geodetic research, but also in physics and astronomy. They will investigate the movement of the Earth, including the oceans and the atmosphere. The centre of the Earth performs small, millimetre movements due to phenomena occurring in the interior, and above all on the surface of the Earth. The shape of the Earth is flattened due to the rotational motion of the planet. However, the Earth's flattening is not constant in time. The project is designed to answer the question of how the flattening of the Earth has changed due to melting glaciers in Antarctica and Greenland in the last 40 years.