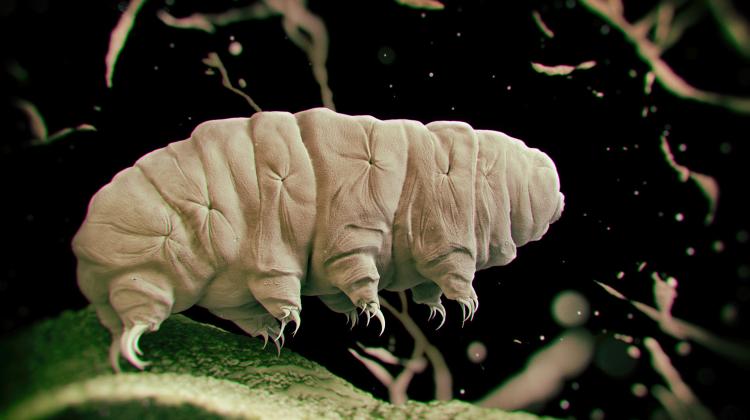 Microscopic invertebrates known as tardigrades have been found to ‘hitch a lift’ on the back of snails to ‘conquer areas faster’ than they could otherwise do.

Affectionately called ‘water bears’, the tardigrades were tracked by researchers from Poznań’s Adam Mickiewicz University to see how they interacted with their snail neighbours.

One of the most resilient creatures known to man, tardigrades have previously been sent into space, have survived in a vacuum at a temperature close to absolute zero in conditions of high ionising radiation, and for decades without water.

But because snails and tardigrades live in similar areas and live in similar environmental conditions such as wet, shady places, preferably full of moss, the researchers decided to find out what other similarities they have.

Lead author of the research Dr. Zofia Książkiewicz -Parulska said: “I study snails, Milena [Roszkowska] studies tardigrades. Because we like each other, we decided to conduct joint research and investigate the relationship between these animals.

Her colleague Roszkowska added: “Our research shows that we lack information about the interactions between animals that live right next to our house.”

The scientists were especially interested in whether snails could help their much smaller invertebrate neighbours to move around. Tardigrades, despite having eight legs, due to their size (0.01-1.2 mm) move much slower than snails that have only one leg but can travel up to a few meters in a week.

For a human, the snail speed is nothing. But for a tardigrades (their Latin name Tardigrada means 'slow steppers') moving at a maximum speed of 23 mm per hour - it's like travelling by train.

In the experiment, it turned out that the tardigrades would attach themselves to snail mucus, cross a silicone barrier, and be transported to new places that they would not be able to get to on their own.

However, snail mucus is not a friendly environment for tardigrades. 2/3 of these animals (that can survive in space) do not survive being kidnapped by a snail.

She added that tardigrades kidnapped by snails feel the moisture of mucus and wake up from anhydrobiosis. Snail mucus, however, dries quickly, and adverse conditions quickly affect the tardigrade. Some tardigrades may not be able to re-enter anhydrobiosis quickly, which is why they die.

Tardigrades can reproduce by parthenogenesis, so one individual is enough to give birth to offspring. This means that even if some of them kidnapped by snails do not survive the snail trip, the whole population still benefits - those that survive will conquer new areas.

The researchers now want to check how the snail mucus affects tardigrade eggs that can also stick to the mucus.

The research was published in  Scientific Reports.