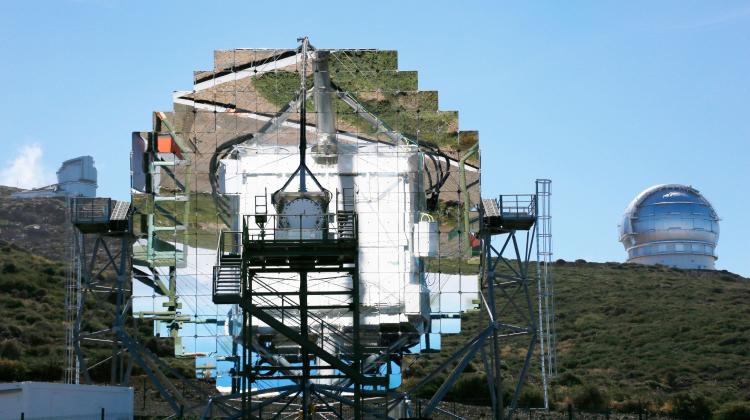 Scientists have detected ‘very high’ energy gamma rays from a star system in which a recurrent nova outburst took place.

Erupting every dozen or so years, the RS Ophiuchi system consists of two stars: a white dwarf and a red giant. The matter from the red giant flows to the surface of the white dwarf. After exceeding a certain critical mass, a thermonuclear outburst takes place in the hydrogen layer of the white dwarf. The heated matter is ejected into space at thousands of kilometres per second and flares with a brightness of up to 100,000 times that of a typical Sun-like star.

The latest RS Ophiuchi outburst was recorded on August 8, 2021, first by optical telescopes. Over the next few hours, the Large Area Telescope aboard the Fermi satellite also recorded gamma rays from RS Ophiuchi.

These observations resulted in directing the Cherenkov telescopes - H.E.S.S. in Namibia and MAGIC in the Canary Islands and the discovery of gamma emission with photon energies up to several dozen times higher than those observed by Fermi.

Observations with MAGIC telescopes made it possible to detect radiation hundreds of billions of times more energetic than visible radiation and characterise the emission from the recurrent nova RS Ophiuchi only 24 hours after its outburst.

Thanks to these observations, by combining data with observations at lower energies, scientists have shown for the first time that gamma rays from novae are produced as a result of proton acceleration in a shockwave induced by the outburst.

Some of these protons lose their energy by producing gamma rays. Most of them escape to interstellar space. They thus contribute to the average galactic cosmic radiation (cosmic radiation consist of high-energy protons that travel through space at speeds close to the of light). The contribution of novae to the average galactic cosmic radiation is small compared to supernovae. However, in the case of recurrent novae, protons accelerated in subsequent outbursts will accumulate, forming bubbles of enhanced cosmic ray density around them.

Although the observations show that outbursts of recurrent novae generate gamma radiation, it is still not known whether the emission of this radiation requires the presence of a red giant in a stellar system with a white dwarf, or whether it is a more universal phenomenon, also found in systems where a white dwarf is accompanied by a star in a stage of evolution similar to that of the Sun.

The research results have been published in Nature Astronomy. The first author of the paper is Victor A. Acciari from the Universidad de La Laguna (Spain). The co-authors include scientists from the University of Łódź: Włodzimierz Bednarek, Paweł Gliwny, Julian Sitarek and Dorota Sobczyńska.