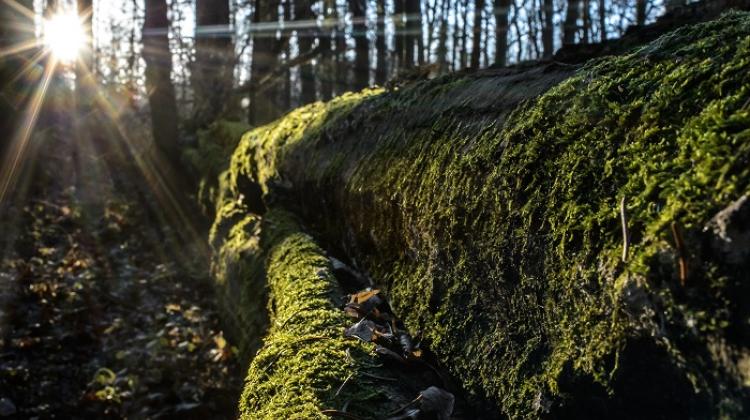 During the mass migration period (4th to 6th century CE) agricultural areas and forest regeneration occurred in the area of today's Poland. Then, along with the intensive settlement of the Slavs and the Balts, and then the development of the state, primeval forests began to gradually disappear.

These are the results of the analysis of pollen trapped in layers of lakes and peat bogs. Researchers from the Adam Mickiewicz University and the W. Szafer Institute of BotanyPAS in Kraków described the history of Poland from the point of view of forests.

Plants leave traces that can survive thousands of years. Plant pollen carried by the wind ends up in surrounding lakes and peat bogs, and accumulates in their sediment layers. This material, preserved in an anaerobic, moist environment, becomes a unique record of changes in a given environment. When a good quality core is extracted from the bottom of the lake or peat bog, it is possible to check which plants dominated in the area and when - whether it was vegetation typical for forests or for agricultural activity. On this basis, researchers can draw conclusions about the history of the studied region.

Researchers from the Adam Mickiewicz University decided to compare information about the pollen accumulated over the last 1,500 years in the sediment from 36 profiles (cores) extracted from lakes and peat bogs in northern Poland. They investigated the course the process of disappearance of primeval forests in Poland. They described their research results in a paper in Scientific Reports.

According to earlier hypotheses, the migration period in Europe (it is assumed that in Poland it lasted from the second half of the 4th century to the beginning of the 6th century CE) was a period of 'brief respite for the vegetation', especially in Central Europe. The research of the team from the Adam Mickiewicz University, however, shows that in some areas this 'respite' was much longer than previously thought.

Sambor Czerwiński from the Faculty of Geographical and Geological Sciences of the Adam Mickiewicz University in Poznań said: "During the migration period, there was a massive population exchange, initiated by the invasion of Eastern Europe by nomadic Huns.”

He added that as a result of mass migrations, forest reclaimed the areas previously occupied by arable fields. He continued: “However, the conclusions concerning the range and chronology of migration are based on a limited number of finds.”

Research shows that hornbeam was one of the main trees in the primeval forests existing at that time in the area of today's Poland. In most areas, these forests resembled a hornbeam forest (with the dominance of hornbeam and oak). Beech dominated in today's northwestern Poland, and in its north-eastern part, the most common trees were apart from hornbeam and spruce.

In most of the analysed area, this situation lasted until the 8th-10th century, when after a long break forest felling began, associated with settlement pressure.

This time the new Slavic communities brought with them not only a change in traditions, new ceramics and construction techniques (tribal forts), but also led to visible changes in the natural landscape. Probably it was the construction of strongholds and demographic growth that contributed to the increased exploitation of forests, including the more intensive harvesting of hornbeam.

Czerwiński said: “It is known, however, that hornbeam was not used for the construction of forts: it was not very shapely, so it was not used to build houses or make tools. It was mainly used as fuel. In addition, it occupied quite fertile habitats, so human activity primarily favoured hornbeam clearing for fields, as evidenced by a significant decrease in its percentage shares in most pollen data in the Polish Lowlands.”

He added that rapid deforestation, most of which occurred in just two centuries (800-1000 CE) in northwestern and north-central Poland, may suggest rapid demographic and economic development of the communities that inhabited these areas before the formation of the earliest state structures in the 10th century. “Interestingly, the first traces of mass deforestation in north-central Poland date back to the 7th century CE,” he said.

In north-eastern Poland, intensive deforestation took place much later. It was initiated by the Baltic tribes in the 11th century CE and gained momentum with the development of the Teutonic Order (14th-17th century). So it was settlement processes of various intensity in different parts of the Polish Lowlands that determined when the given areas were deforested.

Czerwiński said: “Palaeoecology (in short, reconstruction of the past environment based on materials preserved in sediments, such as plant pollen and spores) allows to look into the past and shows that the time of natural forests and entire ecosystems has gone forever. The total disappearance of natural forests with primeval features as a result of deforestation can be counted in hundreds of years.”

The place where degradation of forests caused by human activity was recorded at the latest time in north-eastern Poland, where the remains of vast natural forests (Białowieża Forest) currently serve as a time capsule and remind us of their former appearance and range.

Czerwiński continued: “These forests are unique, if only because of their longevity, which offers a unique look at long-term ecological processes. Therefore, we should make every effort to preserve them.”

He added however that there are no virgin hornbeam forest analogues in Poland, as those were destroyed as a result of extensive and quick deforestation during the early Middle Ages.

He said: “We currently see, however, that due to factors including climate change, a number of species retreat, including pine and spruce. Hornbeam, which is not attacked by pathogens, is doing amazingly well. Perhaps this is a good lesson from the past that we should allow it return to its former glory?”