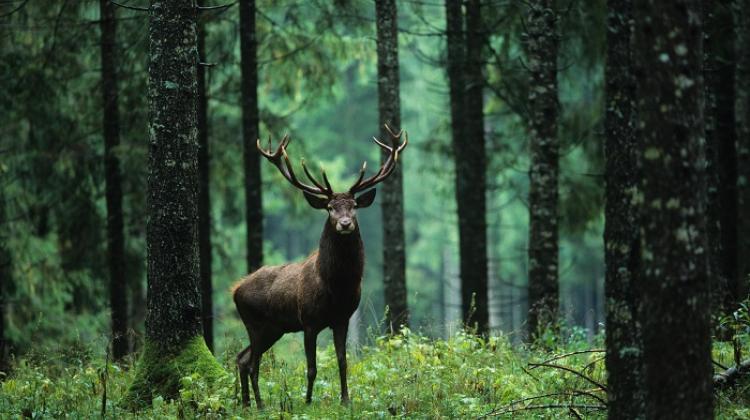 There are relatively fewer deer and fewer ticks near popular forest trails and paths, according to new research.

Scientists from the Dutch University of Groningen, the Swedish University of Agricultural Sciences in Uppsala and the Mammal Research Institute of the Polish Academy of Sciences in Białowieża investigated how the presence of people in the forest influenced the use of space by deer and the density of common ticks.

They found that using recreational paths translates into a lower risk of Lyme disease infection.

Up to 30 percent of ticks are carriers of various diseases, mainly Lyme disease, anaplasmosis, babesiosis and encephalitis. The number of Lyme disease infections in Poland is slowly and systematically growing.

According to data from the Polish National Institute of Public Health/National Institute of Hygiene, in 2021 (from January to mid-October), 10,558 Lyme disease cases were detected in Poland. In the same period in two previous years, there were respectively 10,087 and 9,713 cases.

The new study concerned the impact of human activity (recreation in forest areas) on the behaviour of animals in the context of the risk of transmission of zoonoses. The scientists published their conclusions in Science of the Total Environment.

The study was conducted in the Dutch forest region Veluwe. Two fragments of pine forest rich in berries were selected, inhabited by fallow deer, red deer and wild boars.

As part of the study, the scientists compared deer activity in a specific area (estimated based on the amount of droppings) and the number of ticks. They were interested in sections parallel to forest paths, 20 and 100 meters away from the paths.

Some of the paths were used by people recreationally, some were not popular among hikers (they were mainly used by forest services).

The scientists found that fallow deer and red deer approach recreational paths much less often than paths not used by people. Such conclusions can be drawn based on the amount of animal droppings, which was 31 percent lower within 20 meters from the paths than within 100 meters.

A similar effect concerned the presence of ticks. Within 20 meters from popular walking paths their density was 62 percent lower than within 100 meters from popular paths. In the case of paths not used by hikers (only sporadically by forest services), the difference in the density of ticks close and far from the trail was only 14 percent.

A similar effect may concern roe deer, common in Polish forests, which a less numerous species in the studied area, comments one of the authors of the study, Professor Dries Kuijper from the Mammal Research Institute PAS in Białowieża. He said: “Generally, people have a very clear, strong impact on almost all species of wild ungulates, including roe deer. Deer react to human presence and definitely can avoid forest paths that people use intensively.”

Explaining the mechanism of the presence of ticks (or their lack) on the paths of wild animals, Kuijper referred to earlier studies which show that deer density in a given area strictly correlated with tick density. He said: “To put it simply, if there are more deer somewhere, there are usually also more ticks.”

He also drew attention to the role of deer in the spread of ticks. In places where they frequently walk, there is greater the risk that an adult female tick will fall to the ground and lay eggs. And then nymphs and larvae will appear there.

When the use of space by deer is constant (as in the case of the new study described in Science of the Total Environment, where ungulates avoided recreational forest paths), this can lead to a reduction in the number of ticks (on a local scale) near the paths.

Kuijper said: “Deer carry tick nymphs and larvae practically all the time. At the same time, ticks search for places where it is easier to drop on a passing deer. As a result, greater deer activity leads to greater local density of ticks.”

Previous Polish-Slovak research showed that wandering in the woods along the paths used by wild animals clearly increased the risk of a tick attack. The likelihood of encountering a tick on forest animal trails is up to 7 times greater than in thickets.

The authors of the new publication say that a simple measure of using popular walking forest paths may reduce the risk of infection with tick-borne diseases such as Lyme disease or tick-borne encephalitis.