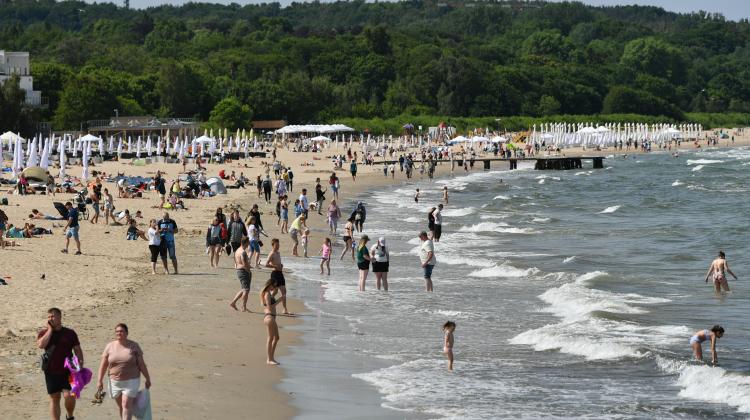 A leading oceanographer has warned that Poland will see an increase in rising water levels, that storms swamp quays and the country will have to invest more in the restoration of beaches, putting concrete on dunes and installing gates on rivers.

Professor Jacek Piskozub from the Institute of Oceanology of the Polish Academy of Sciences, Vice -President of the Advisory Group on Climate Crisis at the President of the Polish Academy of Sciences said: “In cities such as Ustka or Kołobrzeg, the sea level is already 20 cm higher than when the quays were built. In Gdańsk the difference is already 30 cm.

Meanwhile, scientists predict that due to global warming, rising sea levels will accelerate even more.

How much the level of the sea will rise by the end of the century depends on the extent to which humans will reduce greenhouse gas emissions.

According to the average scenario (that assumes that humanity will begin to absorb carbon dioxide), by the end of the century the sea level will increase by about 50-60 cm.

But according to Professor Piskozub it would be safer to assume that by the end of the century the water level will increase by more than 1 meter.

WHAT WILL HAPPEN TO BEACHES?

He said: “There would be no beaches in some places right now if not for the annual adding of sand. If the sea level continues to rise, we will have to invest more and more in the restoration of beaches. The question is where do we get enough sand for this.

“Sooner or later we will have to start raising and strengthen of the dunes either as shafts or as walls - because there are two trends. And at some point it will start to look like in the Netherlands, where you have to go pass a wall to reach the beach.”

He expects that this will be the case in Sopot, which without such protection will be flooded by the sea, especially in winter.

The rising sea levels will first be noticeable during storms that most often happen in winter. The wind causes the sea leavel at the shore to rise even by 1 metre (the record in Świnoujście at the end of the 19th century was almost 3 metres). Some cities have already lost 1-3 cm of the quay and during the storm the waves break through the waterfront.

Piskozub said: “Remember that if sea level rises by one metre as a result of global warming, and there is also a storm, there will be even more places where water will be able to enter the shore.

“In Poland we have the long-term 'Sea Shore Protection Programme' from 2003, updated in 2015, but the Act does not directly refer to the rising sea level. Measures described there involve adjustment, improvement of groynes, concreting cliffs (which is in my opinion is flawed), but there is no question of increasing the height of the infrastructure.”

WHERE WILL WE HAVE PROBLEMS?

Poland is in a fairly good situation considering that the coast is usually not flat. Where there is a beach there also tends to be a high dune and forest, and in some places even cliffs. In such places, the rising sea levels will not be very problematic for now.

The most threatened towns are those at river mouths, for example Ustka, Kołobrzeg, Świnoujście, Gdańsk.

Professor Piskozub said: “The problem is that these are not only low altitude areas, but there are also extensive flat areas created by river deposits. The surface slowly collapses if the soil is not re-supplied. Rivers would supply the soil naturally, but in the areas occupied by man they usually have no chance. This is the case with Żuławy, a region that is partly below sea level.”

In Żuławy Wiślane (the delta area of the Vistula), steps have already been taken to defend against the rising sea level, for example a floodgate is being built on the river. The purpose of the gate is to protect against the reverse flow - the gate is closed when the sea level rises during the storm and the water could flow upriver into the land and threaten flooding.

According to Piskozub, such floodgates should also be installed in other places, for example in Gdańsk but adds that a reverse flow protection may not be enough.

He said: “There is still the possibility of water overflowing the waterfront, for example even in places where there is now the city stadium or Letnica. There is one more danger: the water intake in the Reagan Park, where 30 percent of municipal water for Gdańsk comes from. If this water is salinated, it will cease to be drinkable. And with a rising sea level, this will happen sooner or later. Even raising the hight of the dunes will not help, because underground waters have a connection to the sea.”

WHERE NOT TO BUILD

Whereas in Germany regulations forbid construction in the most endangered areas, Poland does not have the same prohibitions.

Piskozub said: “Buildings are built in many such places. Such plots will be threatened with flooding during storms, and over time permanent flooding.”

He added that if a developer in Poland convinces the city to build a housing estate somewhere - on a cliff or in a low area - the Maritime Office must secure it by building a shaft or stabilizing the cliff (which may not make sense in a broader context).

Piszkozub said: “These are activities without proper planning. If we do not do anything, you can guess that a large flood will happen someday, for example in Szczecin, cause panic and a national plan to save the coast will be prepared quickly.

“By the end of the century, even acting quickly and in panic, we will probably be able to protect ourselves and prepare for an increase in sea level by 1 metre. But in the next century we will need 2-3 metres, ant that might be the end of our engineering capabilities. This means that we leave a huge problem with the protection of the coast to our children and grandchildren.”

WHY IS THE SEA LEVEL RAISING?

The sea level, says Piszkozub, is rising for two reasons associated with global warming. The first is the global melting of glaciers and mountain ice sheets. He said: “If we melt the ice that floats on the sea, the water level will not change, according to Archimedes' principle. It is different when land ice melts and flows into the sea. Then the sea level must rise.”

The second reason is that the volume of water increases as the temperature increases (for example, water that fills a container at 4 degrees C will begin to pour out of it at a higher temperature). This is due to thermal expansion.

Piszkozub said: “A particularly big problem will be the moment when the ice sheet of Western Antarctica, which rests there at the sea bottom, is destabilised. If this part of the continent melts, the global sea level will rise by 5 m. There are scientists who fear that it will not take thousands of years but happen much faster instead, because the warm sea begins to wash the ice underneath, which can accelerate the process.”