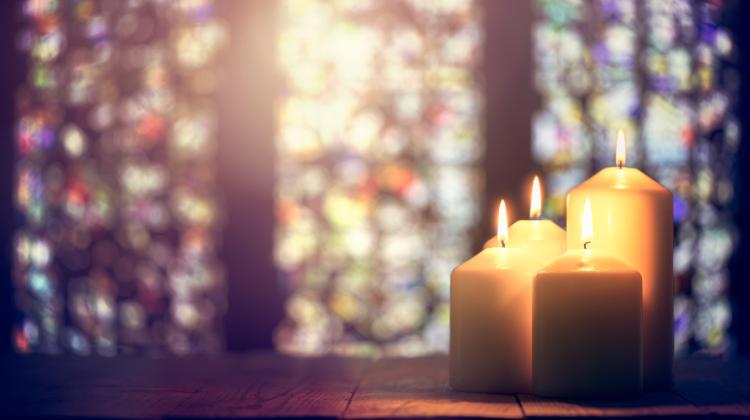 In November 2020 and April 2021, during the second and third waves of the pandemic, researchers from the Institute of Sociological Sciences and Pedagogy, Warsaw University of Life Sciences carried out a an online survey of around 2,000 people.

Publishing the results in PLoS One (https://doi.org/10.1371/journal.pone 0269015) lead author Dr. Rafał Boguszewski said: “The idea for this study appeared at the beginning of the pandemic. We were interested in Poles' attitudes towards the new situation in general: we asked about their behaviour, fears, experience and opinions. Religious involvement was only one of the elements.

“However, since we noticed significant changes taking place in this respect, we decided to explore the topic, hence the two latest waves of our study concerned this issue to a broader extent.”

Although followers of various religions took part in the study, but due to the structure of Polish society, the vast majority were Catholics.

Participants were asked about changes in their religious involvement during the pandemic, as compared to pre-pandemic times: whether it had increased or decreased. The collected data were analysed both separately for both waves of the study and together, which enabled more in-depth analyses thanks to the greater number of answers.

Dr. Boguszewski said: “We asked, for example, about traditional religious practices implemented before and after the outbreak of the pandemic. However, in order to rule out moving away from practicing religion solely as a consequence of lockdown and limited access to churches, we also asked a question about the respondents' subjective assessment of their own religious commitment. We were interested in whether Poles noticed any change in this area, whether after the pandemic started they devoted more or less time to their own prayer, meditation and other religious practices.”

It quickly turned out that a certain trend was visible: in the initial period of the pandemic, the conviction of own religiosity increase was slightly greater, and then it began to fall.

Boguszewski said: “At the beginning, when the sense of danger was great and people did not know what to expect and felt that they were facing life threatening events, they turned to religion more, which is consistent with previous findings that some people are looking for a sense of safety in religion. However, then, as they became more accustomed to the situation, a sense of growing religious involvement began to decrease.”

A thorough analysis showed that regular participation in institutional religious practices in the study group fell threefold during the pandemic - from 31.2 percent before COVID-19 to 11.9 percent during the pandemic. The number of people who did not go to church at all increased from 23.1 percent to 57 percent. Between the second and third waves there was a slight return to regular practices (from 10.1 percent to 14.1 percent).

Dr. Boguszewski said: “Our study clearly showed that the increase in religious involvement occurred especially among those characterized by above-average religiosity measured in practices already before the pandemic. On the other hand, the people who had practiced occasionally began to completely abandon the ritual religiosity during the pandemic. We think that the pandemic, social distance requirements, restrictions on gatherings, and consequently weakened social control, have become an excuse for them to stop practices.”

Researchers also asked about participation in online, radio and television religious practices. These forms turned out to be attractive especially for those who had been more religious before. Boguszewski said: “They complemented traditional religious practices rather than become an alternative to them, because people practicing through the media during the pandemic, would often also regularly go to church. On the other hand, Poles who practiced sporadically or not at all before the pandemic were not interested in religious practices online.”

Among other variables that had a statistically significant impact on the strengthening or weakening of religiosity, Dr. Boguszewski mentions age (the religious involvement of older people increased, of younger ones decreased) and the number of children in the household. It turned out that the more children, the stronger the decrease in religious commitment. 'This, however, is quite logical: due to the closure of schools and kindergartens, children had to stay at home, so their parents had more duties and less time for other activities, including religious practices'.

The last variable was life satisfaction: people more satisfied with their lives more often declared an increase in religious commitment.

The study also revealed an increase in polarization of Polish religiosity during the pandemic. Other studies, including those systematically conducted by the Polish Centre for Public Opinion Research, lead to the same conclusions.

According to Boguszewski, another wave of measurement will be important in the context of complete lifting of pandemic restrictions. He said: “It will show us how the situation has changed after the pandemic. However, we have strong grounds to suspect that the trend of departure from religiosity not only does not reverse, but even intensifies, which is suggested by the results of the Centre for Public Opinion Research studies.”

He added that it will be crucial to ask for the direct reasons for the decrease in religious commitment. The pandemic coincided with other events that could have contributed to the people turning away from the Catholic Church. He said: “We have not asked about it yet, but it can be assumed that issues such as the more restrictive abortion law and numerous scandals involving church officials could even more significantly affect people's discouragement from religion than the pandemic itself, especially when it comes to young Polish citizens.

“To sum up: the decrease of religious involvement during the pandemic is quite clear in Poland. Only the most involved people who had previously participated in religious rituals more often than others, strengthened their religious commitment. The remaining part of our society, especially the younger part, clearly limited its religious commitment.”