From air-conditioned rooms to special bathing areas, Warsaw zoo animals have ways of coping with heat 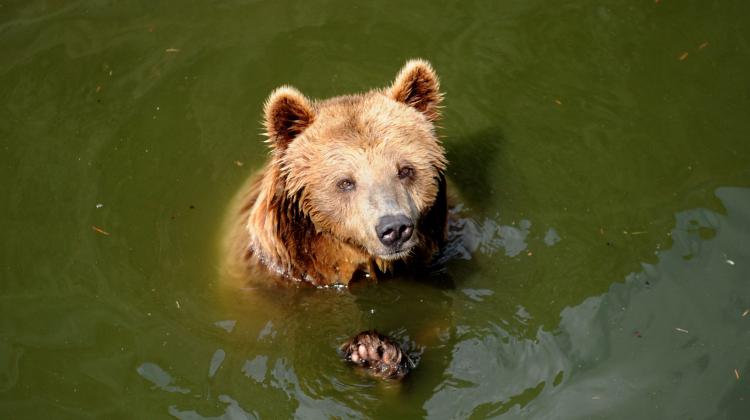 In addition to air-conditioning, showers and bathing areas, animals at Warsaw zoo have numerous ways of dealing with hot temperatures, says the zoo’s head of social communication.

Anna Karczewska told PAP: “First of all, the heat does not mean the same to every animal and does not bother every animal in the same way. Some don't like hot weather, some don't care about it, and some even enjoy it. It all depends on the natural range of a given species and its environmental adaptations.

“Judging only by the human senses can be misleading - animals from different environments have different physiological adaptations to cope with temperature changes.

“Cold-blooded animals such as reptiles and amphibians generally like it when it is warm – that is when they are active and can feed. For example, as soon as it gets warm, crocodiles go out to the outdoor enclosures and bask in the sun.

“Of course, they should not overheat. When they get really hot, they go into the water. You can also see them with open jaws, which is how they dissipate heat. They can also dig a depression in the ground and cool the belly directly from the ground, preferably wet.

“The top of their body is covered with scales that almost form an armour, but on the ventral side they are thin and allow for heat exchange with the ground.”

She continued: “Aquarium and terrarium animals have constant conditions in the zoo, so outside temperature fluctuations do not really affect them.

“Some of the animals in the zoo, even though they are associated with the hot savannah, are bothered by the sun. For example, giraffes prefer to stand in the shade instead of running. Visitors are sometimes disappointed with this behaviour... Giraffes can also return to their pavilion at any time.

“The animals get as much drinking water as they need, sprinklers for cooling, water and mud pools, small pools like for birds, etc.

“The Cape penguins come from Africa, not Antarctica, so they actually need to be protected from the cold. Penguins have water in which they spend a lot of time, and that is the best cooling. Polar bears have air-conditioned rooms at their disposal, and if they are not on the outside, they stay in those rooms.

“However, bears prefer to cool themselves in the water in pools. In addition during heat waves they get sprinklers and frozen water, often with a herring insert.

“The animals themselves decide where they want to be at any given moment and where they feel comfortable, even if people would choose a different place for them.

“Hoofed animals like to cool themselves through hooves, they wade in the mud. They also like to rest in the shade, preferably in hollows dug for them or by them in the soil. In turn, elephants like to roll in the mud, making a mask for their skin. which, after all, is not covered with hair.

“Animal hair and bird feathers aren't just about keeping them warm in cold weather. The fur is also an insulator against heat and protects against sun rays.

“The zoo leaves selected areas of the garden and enclosures unmown which reduces the loss of water from plants and soil, but also brings relief to animals - it is cooler and there is shade near the lush greenery.

“Zoo visitors should understand that animals have a choice whether at a given moment they want to stay in the sun, bathe or sleep in the shade. They should also be aware that they can see them at a given moment and do not know what they were doing a moment earlier - maybe they were swimming, so now they prefer to dry themselves in the sun.

Animals also have defence mechanisms against overheating. In the case of dogs and ungulates, it is mainly panting (rapid, shallow breathing causing rapid evaporation from the oral cavity and respiratory tract), kangaroos and rodents secrete saliva abundantly and moisten their skin with it. Some ungulates may also sweat in certain areas. For example, horses mainly sweat through the abdomen and neck. When horses run for a long time, the sweat turns into a kind of foam on the skin.

The scimitar oryx begins to sweat when the body temperature exceeds 46°C, their kidneys retain water, and the oryx is resistant to the lack of water (it can survive for weeks without drinking, water contained in the plants it feeds on is enough for it).

The light colour of its hair absorbs less heat. In the case of elephants and rhinoceros, they are protected by thick, wrinkled skin, which, however, lacks sweat and sebaceous glands. The animals care for it and cool it with water, mud and sometimes sand baths.

Hippos, on the other hand, have a special pinkish/rusty discharge that protects some parts of their skin from the sun and infection because their skin is fragile in places. But they mostly stay in the water anyway.

Birds have a naturally high body temperature, so they can tolerate heat a little better than humans. However, they also use defence mechanisms. For example, they do what mammals do - they pant to get rid of heat through evaporation.

They do not have sweat glands, so they do not sweat in a physiological sense, but they dissipate heat better from areas that are not covered with feathers, for example under the wings. Sometimes you can see them lifting and 'opening' their wings to increase ventilation.

They also take baths and then they take special care of moistening the naked parts of the skin - most often around the beak and eyes (combs, bells or strips of unfeathered skin).