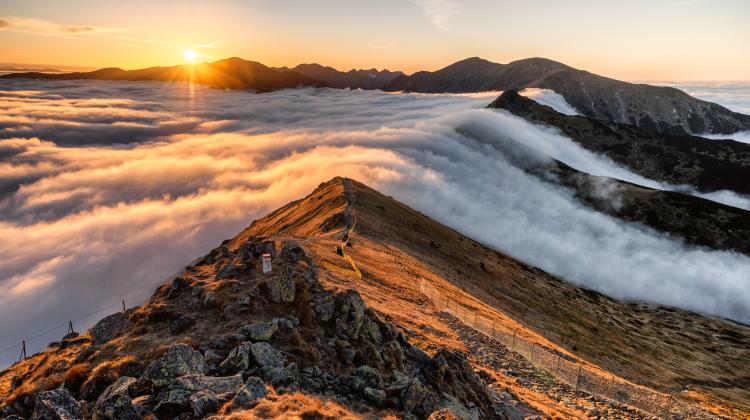 While most of Poland sweltered in temperatures of over 30°C last week, the Tatra Mountains recorded their coldest ever July as temperatures plunged to -5.7°C.

Litworowy Kocioł struggled with below freezing temperatures for four days in a row, setting a new record.

The Tatra’s previous coldest temperature was a chilly -5.5°C recoded in 1996 at Hala Izerska.

‘Frost Hunters’ under the supervision of meteorologists at the Adam Mickiewicz University in Poznań, began temperature measurements in two Tatra cold-air pools (Litworowy Kocioł and Mułowy Kocioł) on June 20.

Researcher Kamil Filipowski said that the phenomenon of extremely low temperatures in Litworowy Kocioł during heat waves actually applies to the entire massif of Czerwone Wierchy in the Western Tatras, and is due to the combination of the formation of post-glacial cirques with karst phenomena.

He said: “There are many similar places in the Alps. In the Tatra Mountains, it is a unique massif. Water escapes through the underground crevice system and instead of lakes, we have dry cirques, where cold air can accumulate.

“Low temperatures are a result of the phenomenon of radiation inversion near the ground surface with an orographic effect. This inversion works when there are no clouds and it is more intense when the content of water vapour in the air is lower.

“Czerwone Wierchy cirques have the advantage of higher altitude above sea level over other cold-air pools in Poland and can be compared to alpine cold-air pools.”

He added that further record cold temperatures are expected, saying: “It is a matter of cloudless and dry weather with a fairly cool air mass, and when the snow falls, maybe Mułowy Kocioł will join the competition for cold records with Litworowy Kocioł.”

The research project aimed at measuring temperatures in the Tatra cold-air pools was initiated by 'Frost Hunters': Arnold Jakubczyk, Kamil Filipowski and Michał Wróbel. The leader of the research group is Dr. Bartosz Czernecki from the Department of Meteorology and Climatology of the Faculty of Geographical and Geological Sciences of the Adam Mickiewicz University in Poznań.