Summit elevations in the Tatra Mountains should be corrected, say scientists 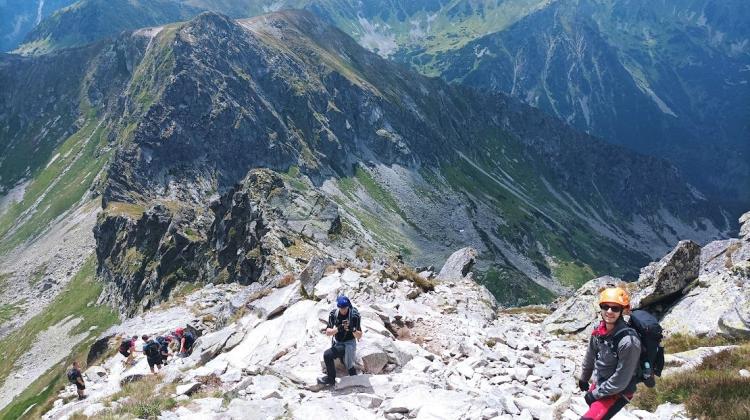 Scientists in Wrocław say many atlases and textbooks will have to be revised after they carried out precise measurements of the Tatra summits and found previous measurements were wrong.

According to researchers from the Institute of Geodesy and Geoinformatics at the Wrocław University of Environmental and Life Sciences, Świnica turned out to be one meter higher, while the Skrajny Granat on Orla Perć - is three meters higher.

Meanwhile, the border post on Rysy is 2,500 m above sea level.

To accurately gauge the elevations of summits in the High and Western Tatras, the researchers travelled over 231 km of trails, climbing an elevation difference (up and down) equal to 39,963 m, which is more than four times the height of Mount Everest.

Describing their findings as ‘surprising’, the researchers said: “Satellite measurements using the direct GNSS technique allowed us to clearly determine the height of the summit.

“Today we know that the elevation of Świnica is 2302.36 m, which is more than 1 m higher than previously assumed.

“It is the height of a natural boulder on the top. A little below the summit, there is a Polish-Slovak border post at the altitude of 2301.57 m.

Sometimes there are situations where the elevation of a geodetic point or a post is given on maps instead of the natural peak.

“On Świnica, the measurements clearly indicate that the elevation given in atlases and textbooks should be corrected, as it is 2302 m.”

Skrajny Granat on Orla Perć turned out to be higher than expected. Until now, it was assumed that its elevation was 2225 m. Careful measurements showed that the correct elevation of Skrajny Granat was 2228.34 m, over 3 meters more than previously assumed.

The measurements were made on the basis of satellite observations of Global Navigation Satellite Systems (GNSS): GPS, GLONASS, Galileo and BeiDou with precise, multi-frequency geodetic receivers.

Measurements were made with corrections generated by the state-run ASG-EUPOS Active Geodetic Network system and real-time network corrections (RTN) based on reference stations in Poland and Slovakia.

The ellipsoidal heights have been reduced to the Amsterdam Ordnance Datum PL-EVRF2007-NH, based on the 'Geoid 2021' model. Developed in 2021 (by Professor Marek Trojanowicz from the Wrocław University of Environmental and Life Sciences with the support of Magdalena Owczarek-Wesołowska), to date this is the most accurate model of the course of the sea level under the surface of Poland.

This is the first model that takes into account both measurements in Poland and in neighbouring countries, in particular the Slovak part of the Tatra Mountains. It was created on the basis of geodetic measurements of height differences, precision levelling, gravimetric measurements and GPS satellite measurements. In addition, models of rock density in the earth's crust to the crust and mantle boundary, as well as numerical terrain models, which play a special role in mountain areas in terms of the applied computational corrections, were taken into account.

The reference for the Geoid 2021 model is the Amsterdam tide gauge, i.e. the North Sea. As a result, Poland became independent from the previously used system based on a tide gauge in the Baltic Sea, in Kronstadt near St. Petersburg (Russia). The heights difference between the two systems is 10 to 22 cm depending on the part of Poland and results from the fact that the 'Amsterdam' model is based on newer and more accurate geodetic measurements, including satellite measurements, and moreover, the water level in the Baltic Sea is slightly higher than in the North Sea.

The Wrocław University of Environmental and Life Sciences also explains why the exact measurement of the elevation of Polish summits was not possible before.

The researchers said: “The heights of points in Poland are given above sea level in the height system based on normal heights. Sea level is measured on the coast with tide gauges, and then data from many years are averaged.

“However, determining the height of points away from the coast is difficult. To +draw+ the sea level under the continent, geodetic measurements of height differences are necessary, as well as measurements of the acceleration of the Earth's gravitational field, so-called gravimetry, because the course of the sea level under the continent depends on the type and density of rocks that make up the Earth's crust, and these affect the acceleration of gravity.

“Therefore, the heights determined by GPS satellite techniques should always be reduced by the model of the course of the sea level under the continent.”