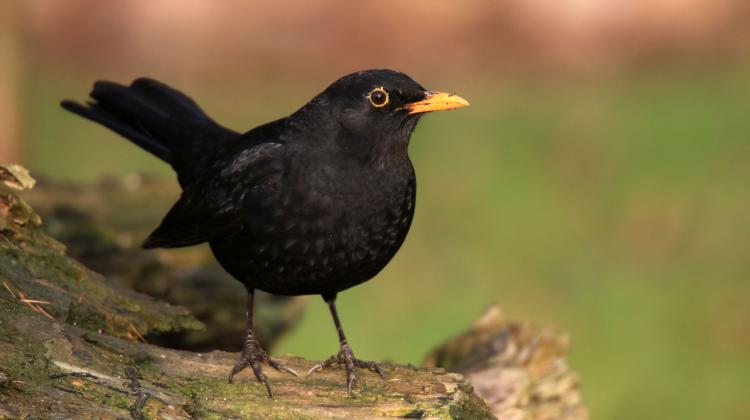 Scientists from Białystok have found traces of microplastics from packaging film and plastic bags in the gastrointestinal tract of blackbirds and song thrushes.

The results of research conducted by the team led by Dr. Krzysztof Deoniziak from the Faculty of Biology of the University of Bialystok was published in Science of the Total Environment(https://doi.org/10.1016/j.scitotenv.2022.158621), and is the first Polish research concerning the consumption of microplastics by birds.

The research was carried out on 16 blackbirds and 18 thrushes that died as a result of collisions with buildings, acoustic screens or high voltage power lines. The birds were collected by team members and volunteers, during nature monitoring and citizen science projects in various places in the Podlaskie Voivodeship.

The researchers found a total of 1,073 microplastics, consisting mainly of fibres below 1 mm. Most of the observed microplastics were transparent, which may indicate that they came from disposable products or foil used for packaging.

On average, 40 microplastic particles were detected in each examined thrush and an average of 21 in each blackbird.

Dr. Deonizak said: “The average amount of microplastic [particles] found in the digestive tract of our thrushes was therefore higher than in any of the previously studied species of land birds, and higher than that stated for sea birds.

The plastics included a large group of synthetic, polymer-based materials, which have been widely used in daily life since the 1950s.

In natural conditions, plastics break down and degrade into microscopic particles referred to as microplastics (less than 5 mm in one dimension) and further to nanoplastics (less than 0.1 µm). These particles gradually accumulate in the environment and are a problem for the living organisms, starting with plants and small invertebrates and ending with humans.

Deoniziak said: “They can hinder and prevent movement, and after being swallowed they can cause damage and obstruction of the gastrointestinal tract, which can lead to appetite disorders and death.”

He added that toxic materials from microplastics and dangerous compounds absorbed from the environment on their surfaces (such as DDT, PCB or heavy metals), reduce survival and growth rates, delay sexual maturity and reduce reproductive efficiency in various animal groups.

He continued: “Most of the previous studies of microplastic were conducted in aquatic (freshwater and sea) ecosystems, but it is expected that land pollution is much higher.

“After all, scientists have detected the presence of microplastics in a distant Antarctica, and on glaciers in the Himalayas, located more than 6,500 meters above the sea level.

“Previous studies indicate that soil pollution is significant, and the microplastics have been detected in plants and various species of invertebrates and vertebrates.”

The members of the research team led by Dr. Deoniziak were: Sławomir Niedźwiedzki from the Glass Traps Foundation, Wojciech Pol - a doctoral candidate at the Department of Water Ecology of the Faculty of Biology of the University of Bialystok and Aleksandra Cichowska, who defended the MA thesis at this department as part of the research project in July 2022.