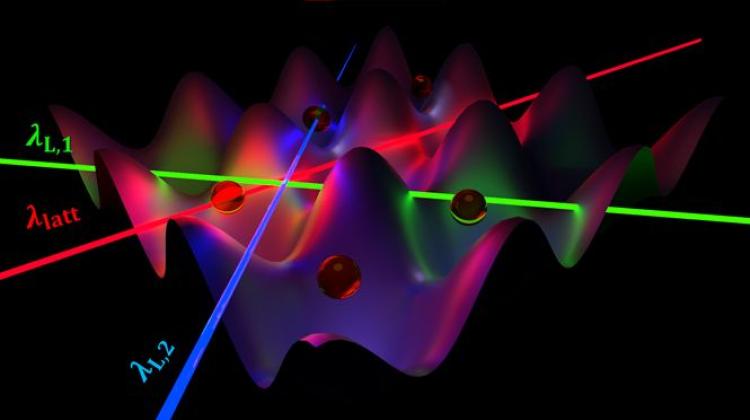 The research results of the international team with the participation of Dr. Emilia Witkowska (the Institute of Physics PAS, Warsaw) and Professor Gediminas Juzeliunas (Vilnius University, Vilnius), in collaboration with Dr. Marcin Płodzień (ICFO, Barcelona) appeared in the prestigious Physical Review Letters. Dr. Witkowska and the team summarise the research project for PAP.

In the world of large, visible objects, we have become accustomed to predictability: if we know the location of a given body and its momentum, with Newton's equations we can calculate its trajectory and tell where exactly this object will be at a certain time - such objects are called classical objects. However, if we study nanoscale objects, their wave nature is revealed and the 'classic' predictability ends. This is due to the laws of physics, and not the inaccuracy of our measuring tools. A consequence of the wave nature of particles is the impossibility to determine the particle's location with 100% certainty; we can only determine the probability with which the particle is in a given point in space. This probability is determined by the quantum state of the particle.

The consequence of the quantum nature of objects is the Heisenberg's uncertainty principle, according to which it is impossible to measure, at the same time, all the properties of a quantum particle with any precision: for example, its location and momentum at the same time.

A large number of contemporary research projects propose to use quantum effects that allow to increase the precision of measuring a given value, including the quantum squeezing.

THE TICKING OF SUPER-ACCURATE CLOCKS

For example, the most accurate clocks use atoms to measure the passage of time - the measurement of the time unit (the second) is based on the measurement of the energy difference between two energy levels, atomic oscillations. In laboratory measurements, atoms, e.g. caesium, are cooled to a temperature close to absolute zero, i.e. the order of nanokelvins, and then based on measuring the difference in the number of atoms in a higher and lower energy states, atomic transition frequency is determined. This is the basis for the definition of a modern time unit. In other words, the more accurately we measure the atomic transition frequency, the greater the precision with which we can measure the passage of time. Currently, atomic clocks achieve precision of about one tenth of a nanosecond per day, which means that the atomic clock may be one second late in 300 million years. Scientists are still trying to improve this amazing precision.

“You could ask if we need such a precise measurement of time? We do indeed, and one of the simplest answers concerns the accuracy of GPS systems that we use in our daily lives when we move from one place to another. Proper time synchronization is of fundamental importance here: if the clocks in orbit and on Earth are not synchronized, the GPS system very quickly loses its location accuracy,” says Dr. Płodzień (scholarship holder of the NAWA Bekker 2020 programme).

For example, if the clocks are synchronized at the level of one hundredth of a second, the accuracy of the position indicated by GPS is about three kilometres! “Imagine the consequences of reaching the journey destination located with such accuracy,” says Dr. Płodzień.

“But that is not all', he adds. “Professional frequency measurements are very important for the development of science, for example, they allow us to verify the predictions of Einstein's general relativity and the fact that time flows differently depending on the intensity of the gravitational field, which means that time flows differently on Earth than in the satellite orbit, where the GPS satellites are located. Synchronization of clocks on Earth and in orbit must take this effect into account. A super-accurate clock would also allow to detect gravitational waves and hypothetical dark matter, which can cause slow oscillation of physical constants.”

To build such super-accurate devices as optical clocks, we need the most accurate information about individual particles. To achieve this precision, however, we need to measure so precisely that we enter the quantum world. This means that the construction of better clocks is hindered by the limits related to Heisenberg's uncertainty principle. Hence, the idea of creating the squeezed states appears important to physicists. Simply put, it is about trapping the particles - for example in the lattice of an optical 'cage' - to be able to precisely determine their certain property (atomic transition frequency) at the cost of blurring another property, which will not be important in the target device.

Until now, the creation of squeezed states in ultracold atoms was possible with bosonic atoms. Such atoms are able to interact with each other as a result of collisions. For bosons, however, there is a dependence of energetic level shift, the value of which depends mainly on the density of atoms, which in turn means that the accuracy of the atomic transition frequency measurement is significantly reduced.

However, the shift of energy levels in fermionic atoms is very limited, which is why fermions are perfect for precise frequency measurements. That is why scientists wanted to produce squeezed states in such atomic gases.

This turned out to be a great challenge. The so-called reason was the Pauli exclusion principle that blocked the possibility of mutual interaction of fermionic atoms at temperatures close to absolute zero. As a consequence of the lack of interactions between atoms, it is not possible to generate squeezing. This limitation, however, could be bypassed.

“Our idea is that fermions trapped in an optical lattice, in which there is one fermion in a single lattice gap, are illuminated with an external laser light with the appropriate phase. It turns out that the coupling of atoms with light introduces the interaction we need between fermions and generates highly squeezed quantum states,” says Dr. Witkowska.

Researchers hope that in the future this idea can be used to increase the accuracy of measuring the frequency of atomic transitions in extremely stable and super-accurate clocks based on fermionic atoms in optical lattices.

“The method we propose requires only a small modification of systems currently studied in laboratories, both ultra-cold fermions placed in the periodic optical lattice, as well as the so-called optical tweezers,” says Professor Gediminas Juzeliunas.

Research of the Polish team is financed as part of the NCN DAINA and NAWA BKKER 2020 projects.