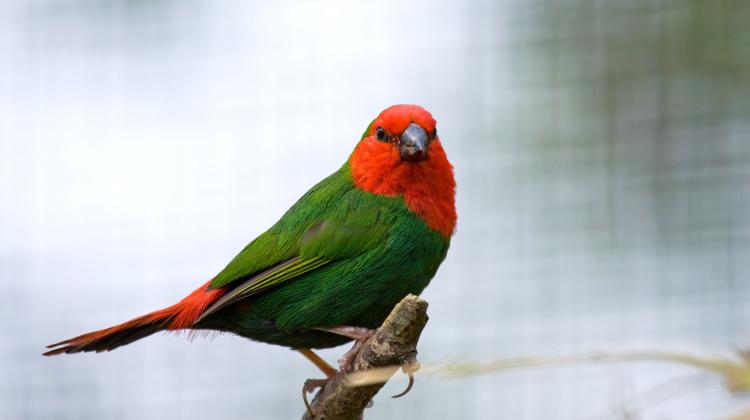 Two genes are responsible for processing carotenoids in birds and give the red colour to their plumage. Carotenoids are also found in photosensitive eye structures and affect seeing, according to the findings of the international team of scientists including a Polish researcher.

The online publication of research results (https://www.sciencedirect.com/science/article/abs/pii/s0960982222012908) attracted so much interest that the editors of Current Biology put it on the cover of the bi-monthly (the paper version will be published on October 10).

Determining which genes (CYP2J19 and BDH1L) regulate the red coloration of bird feathers and to what extent opens the way for in-depth evolutionary biology and ecology research.

Co-author of the paper, geneticist Dr. Małgorzata Gazda from the Pasteur Institute in Paris, said: “We knew from earlier research on white, yellow and red canaries that the gene CYP2J19 has an important role in the coloration of bird feathers, but its mechanism was not well understood. Our research allows us to clarify that CYP2J19 works in combination with BDH1L.”

The color of bird plumage and its intensity depend on what birds eat. Carotenoids found in plants have an important role.

Gazda said: “Carotenoids are a group of organic chemical compounds responsible for yellow, red, orange and pink plant pigments. In birds, they must be supplied with a diet, because the animals themselves do not produce them, but they can process them. If they get one type of carotenoid pigment, they can process it into a different colour with biochemical reactions.”

The first author of the paper, Dr. Matthew B. Toomey from the University of Tulsa in the USA, was the first to determine that CYP2J19 alone, despite quite strong expression, is not enough to process carotenoids and affect the red coloration of bird plumage. He searched for genes that would have oxidizing properties with oxygen and found two of them - RDH5 and BDH1L. Further work confirmed his belief that the former was not important in the combination with CYP2J19, but the latter did matter.

Then the scientists searched for the answer to the question about the mechanism of BDH1L - they wondered if it would lead to the processing of carotenoids without a combination with another gene.

The experiment was repeated. It turned out that the cells processed carotenoids into ε,ε-carotenoids- a different type of carotenoids, which birds with yellow plumage have in large quantities.

The scientists also found that carotenoids are responsible not only for the coloration of feathers, but also the types of receptors in the eyes. Gazda said: “Some birds probably see differently due to the lack of a red pigment in the iris.”

Pigments found in zebrafish also showed that similar genes were responsible for their occurrence.

The scientists have confirmed that the same genes and the same mechanisms occur evolutionarily in very distant species - in this case, in birds and fish.

Gazda said: “It seems that this biochemical path can be a universal mechanism that allows vertebrates to produce red colour', Gazda says.

In the study, the scientists used six species of birds: the chicken, the diamond firetail, the star finch, the red-throated parrotfinch, the northern cardinal, the red siskin and the zebrafish.