Wolves’ favourite food in Roztocze is roe deer, and not red deer as previously thought 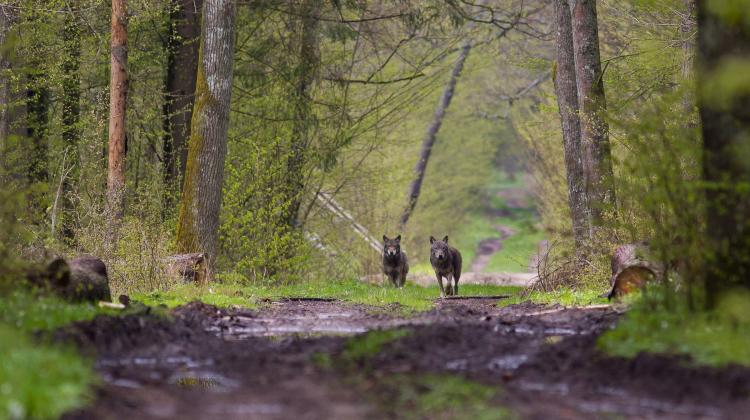 Roe deer, not red deer, is the main source of food for wolves in Roztocze and the Solska Forest, according to research by Polish scientists. The domination of roe deer in the diet of these predators has persisted for two decades. The wild boar currently has the second place in wolves' menu.

Wolves are apex predators, preying primarily on large herbivorous mammals. Research conducted in the 20th century in the Białowieża Forest and the Bieszczady Mountains indicated that these predators preferred red deer over the remaining species of ungulates. What's more, it was suggested that as red deer's number increased, the remaining species would lose their importance for the wolf.

In Poland, the number of red deer and roe deer is still growing, so researchers have the opportunity to verify earlier hypotheses by comparing the composition of the food of wolves in the same area in various periods, says Dr. Robert Mysłajek, a professor at the University of Warsaw and Vice-President of the Association for Nature ‘Wolf'.

The first such project was carried out in Roztocze and in the Solska Forest by a team of scientists and naturalists from several institutions: the Faculty of Biology of the University of Warsaw, the Association for Nature 'Wolf', the Roztocze National Park, the Faculty of Biology of the Adam Mickiewicz University in Poznań, the Institute of Biochemistry and Biophysics of the Polish Academy of Sciences and the Lublin Ornithological Society. Research was conducted in 2001-2002 and again in 2017-2020.

In total, the contents of 386 predator faeces were analysed. Based on the residues found in them, i.e. hair, bone fragments, teeth and hoofs, the content of wolf meals was identified. Research results appeared in the Journal of Vertebrate Biology.

In both periods, wolves consumed wild ungulates, the share of which amounted to as much as 97 percent of the biomass consumed by these predators. Both in the years 2001–2002 and 2017-2020, wolves ate mainly roe deer (58 % and 49 %, respectively). However, while at the beginning of the 21st century the red deer was the second most important prey of wolves (20%), two decades later its place was taken by wild boar (26%). Other species, which included elks, fallow deer, hares, foxes and beavers, were eaten sporadically. Equally rarely wolves consumed domesticated animals.

Dr. Robert Mysłajek said: “Wolves are food opportunists, they most often eat the species that is numerous and easily available. In Roztocze and in the Solska Forest it is roe deer, but in other forests it can be a different species.”

He added that there was still a need to continue to conduct research on the wolf diet. Climate change and human pressure modify the conditions in which wild animals live, which is reflected in the size of their population. Consequently, the availability of potential prey of predators also changes.

Dr. Sabina Nowak, Assistant Professor at the Faculty of Biology of the University of Warsaw and President of the Association for Nature ‘Wolf' said: “This is clearly visible in periods with low rainfall. Lower water levels makes it easier for wolves to hunt for amphibious mammals, such as beavers, which we showed in our earlier studies on the wolf diet in the Wigry National Park.”