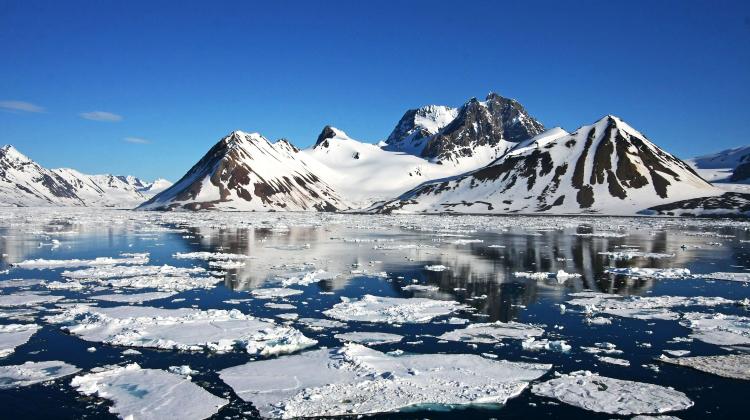 This summer, they conducted research consisting in collecting sea and land sediments, ocean, land and glacial waters and ice cores, to determine the content and migration paths of heavy metals to the fjord.

The project financed by the National Science Centre “is expected to answer the question of whether they are metals of natural origin, washed from the rocks the Arctic - or they are pollutants that appeared there as a result of atmospheric circulation and rainfall. For now, it is unclear which scenario is more likely,” says Dr. Dariusz Ignatiuk from the University of Silesia in Katowice.

According to the scientist, the first results can be expected in the first quarter of next year.

The expedition of the Institute of Earth Sciences and the Centre for Polar Studies: Dr. Małgorzata Błaszczyk, Dr. Dariusz Ignatiuk and Dr. Michał Laska recently completed nearly 3 weeks of work in the region of Wedel Jarlsberg Land and Torell Land.

Members of the University of Silesia expedition led by Dr. Ignatiuk drilled ice cores on Storbreen and Flatbreen glaciers and sampled ablation water from supraglacial watercourses, glacial lakes and crevices, and performed technical control of the glacier balance monitoring system and automatic meteorological stations. They also prepared measuring infrastructure for the polar night.

The next stage of the expedition led by Dr. Ignatiuk included glaciological work on Hansbreen and Werendskoldbreen glaciers, where the University of Silesia has been conducting research for decades.

The COVID-19 severely affected the long-term meteorological monitoring at Hansbreen. During this year's expedition, the process of reconstruction of pre-pandemic infrastructure was initiated, starting with setting up a new automatic meteorological station on the terminal of Hansbreen. The station will be used in the coming years, also by doctoral students of the International Environmental Doctoral School at the Centre for Polar Studies.

Similar work and the monitoring of the glacier mass balance, part of the World Glacier Monitoring System, were carried out on the Werenskindbreen glacier.

The expedition was financially supported and implemented as part of the University of Silesia programme 'Research Excellence Initiative - Visibility of Research Centres' (2021-2022) for the Centre for Polar Studies and from reserve funds of the Director of the Institute of Earth Sciences.

The research constituted a field reconnaissance for the preparation of next year's international field workshop, implemented as part of the 'Interdisciplinary Polar Studies (IPS-2023) Modular Meeting: Arctic Amplification-Glaciers-Environment' project - the Ministry of Education and Science grant 'Excellent Science'. Field work was carried out using the infrastructure of the Stanisław Siedlecki Polish Polar Station in Hornsund and the Stanisław Baranowski Spitsbergen Polar Station.