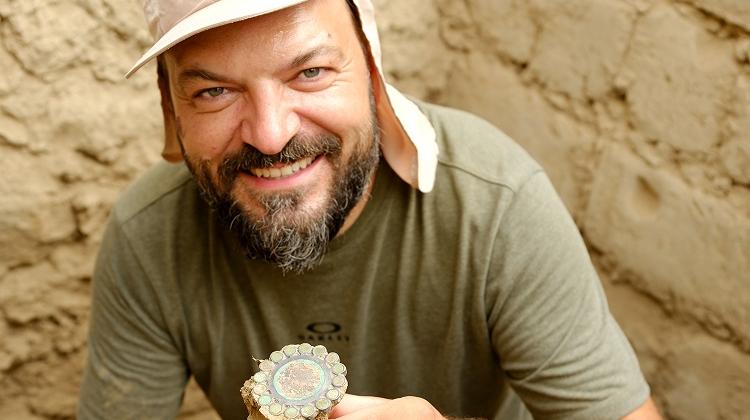 Professor Miłosz Giersz explores of one of the rich pre-Hispanic graves in the Tomb of the Craftworkers. Credit: P. Prządka-Giersz, University of Warsaw

The Tomb of the Craftworkers discovered by a Polish-Peruvian team of archaeologists led by Professor Miłosz Giersz from the Faculty of Archaeology of the University of Warsaw is among the 10 Discoveries of 2022, according to Archaeology.

In December, the prestigious magazine announced its list of the 10 most important archaeological discoveries of 2022.

The distinguished projects include this year's Polish-Peruvian research in the royal necropolis at the site of El Castillo de Huarmey.

The site is located on the northern coast of Peru, near the town of Huarmey. The necropolis in El Castillo de Huarmey functioned over 1,300 years ago and was associated with the Wari Empire, one of the most important empires of pre-Inca Peru. Researchers from the University of Warsaw began the first ever excavations at the site in 2010.

In the Tomb of the Craftworkers they found seven burials of craftsmen who worked at the court of the Wari rulers: four adults and three teenagers. Hundreds of tools and raw materials they had used during their lifetime were also found by their bodies, including an axe, knives, a saw and materials for making baskets.

Wooden and textile products as well as fragments of objects with iconographic imagery painted on leather and reeds were also placed next to the deceased. These discoveries confirm that El Castillo de Huarmey functioned not only as a royal tomb, but also as a place of ancestor worship, an important administrative centre of the Wari Empire and a place of elite craftwork.

Professor Miłosz Giersz said: “The Tomb of the Craftworkers was the first place where we discovered the graves of high-status Wari men, who were also outstanding artists and craftsmen. This is evidenced by the rich grave offerings and objects, including ornaments made of gold and silver. This discovery confirms what we expected in previous years: both men and women buried in El Castillo de Huarmey were devoted to the highest class craftwork and produced the most perfect products of their era.”

Earlier, in 2010, a research team led by Professor Giersz and Dr. Patrycja Prządka-Giersz (Faculty of "Artes Liberales") made the discovery of the first known collective burial of high-status Wari women. Within the tomb, there were the remains of the queen, 57 noblewomen, six human sacrifices and two mutilated guards without feet.

In addition to human remains, the researchers found over 1,300 items made of gold, silver, bronze, precious stones, wood, bones and shells, as well as decorated ceramics.

The jury of the Archaeology magazine also selected the discovery of the wreck of the ship Endurance, which took part in the 1914-1917 British Imperial Trans-Antarctic Expedition. The ship sank in the Weddell Sea and settled at a depth of over 3 km. The list of the 10 most interesting discoveries of 2022 also includes the discovery of the oldest Buddhist temple in Barikot, Pakistan, dating back to ca. 1st century CE, and a Neolithic hunting shrine in Jordan.

The top 10 list includes not only interesting excavations, but also important results of expert analyses. Among them is a CT scan of the mummy of Pharaoh Amenhotep I (ruled 1525–1504 BCE). Another project in the top 10 is the re-examination of a famous figurine from the Paleolithic period - known as the Venus of Willendorf.

Another discovery are the world's oldest drinking straws (half of the 4th millennium BCE). The straws, used for drinking beer, were discovered at the end of the 19th century, but the latest expert analyses revealed their function.

The editors of Archaeology also appreciated the remote sensing research of the Sumerian city of Lagash in today's southern Iraq, which changed the view of the beginnings of urban settlement.

The top 10 also includes microscopic examinations of over 2,500 wooden artefacts discovered at the Templo Mayor in Tenochtitlan, Mexico City.

The magazine also distinguished a new archaeological study in San Bartolo (Petén) in Guatemala, where researchers may have stumbled upon the earliest examples of Maya calendar notations.