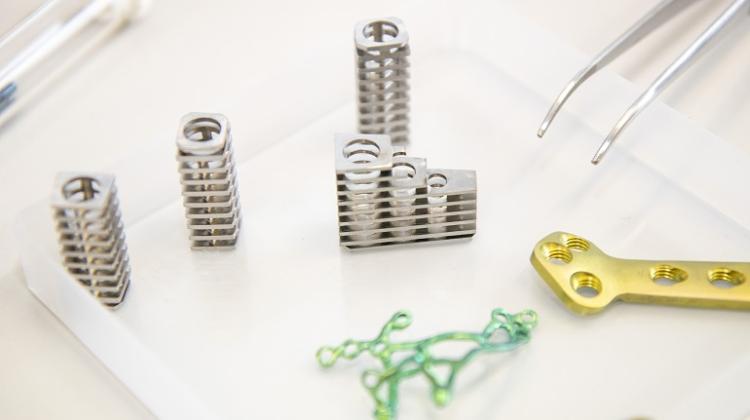 A team of scientists from the Silesian University of Technology has developed a technology for obtaining bioactive coatings on the surface of bone implants for animals. The technology has been licensed to a Polish implant manufacturer and the product is already working well in the treatment of animals.

Head of the Inorganic, Analytical and Electrochemistry Department at the Faculty of Chemistry of the Silesian University of Technology, Professor Wojciech Simka said at a press briefing that the objective of research conducted at the department was to develop bioactive coatings that would ensure the best possible tolerance of implants covered with them by organisms.

He said: “That is why we add elements that are present in our bones: calcium, potassium, phosphorus, the natural building blocks of bones. Thanks to this, the patient's cells feel better on such an implant, they fuse better with it. In addition, such implants are more resistant to corrosion, so they can remain in the body longer.”

Simka explained that the technology of producing ceramic coatings on titanium alloys - the metal best accepted by organisms - is based on high-voltage electrochemical oxidation, which enables the production of porous coatings that resemble bones in terms of structure (regardless of their chemical composition).

Thanks to this technique, he said, “we are able to produce a surface of a very complex shape on implants, with a homogeneous chemical composition. Other advantages include ease of sterilization as well as the possibility of using the implant by a veterinarian or doctor without special medical instruments. Standard tools are sufficient.”

According to Simka, the implant surface is resistant to the action of the body itself (chlorides or salts), and to biomechanics. He said: “Achieving bioactivity, introducing these elements - that is not all because the body tends to fight what is introduced into it; there are also various types of infections.”

The presence of bacteria often leads to inflammation, diseases that sometimes require removal of the implant, i.e. additional surgery. According to Alicja Kazek-Kęsik from the same department of the Silesian University of Technology, this risk is the focus of an ongoing project financed by the National Centre for Research and Development, the objective of which is to cover implants with a drug-releasing coating.

She said: “We are talking about the minimum dose, because we want to limit the use of antibiotics. But we also want the animals to recover as soon as possible. Hence the idea to cover these porous coating layers with a thin layer of polymer with an amount of antibiotic that would be small but sufficient to prevent bacteria from settling.”

Dr. Monika Śmiga-Matuszowicz from the Department of Physical Chemistry and Technology of Polymers assists in the selection of polymers that will biodegrade in the physicochemical environment of the body within a certain period of time. Śmiga-Matuszowicz explained that these are polyanhydrides, the fastest hydrolysable polymers, as well as copolymers - polylactides.

Professor Wojciech Simka emphasised that the university, having dealt with this issue for years, had experience in cooperation with industry and medical companies. Jagoda Krzysteczko-Witek, an innovation broker at the Centre for Incubation and Technology Transfer of the Silesian University of Technology, assisted on the implementation of the new bioactive coatings.

The implementation was carried out in cooperation with an animal implant manufacturer, Iwet. Michał Sujeta from Iwet drew attention to the simplicity of the new solution's production process and its universality. He also noted that the structure of the coatings developed at the Silesian University of Technology was much more advantageous than those previously used.

He said: “These implants are much better tolerated by the animal organism, by the bone tissue, thanks to the implants we produce - and these are largely orthopaedic implants that remain in the patient's body for life - fuse very nicely and there are no problems with rejection.

“We have also had several implantations of bionic prostheses that replace the animal's limb. After using this coating, we had no problems with rejection of such a prosthesis or with healing. This coating is also highly adhesive. It does not peel off the implant, like previously used coatings. It is applied with the plasma spraying method, and the implant itself tolerates the coating process well.”

Krzysztof Danowski, a technologist from Iwet, explained that thanks to the use of a ceramic coating, the titanium scaffold of the implant covered with this coating can fully fuse with the animal's bone tissue, taking over the full load of the part of the bone that had to be removed due to cancer or severe trauma.

He said: “We have several successful implementations. When designing a custom implant, we know, thanks to the knowledge from the Silesian University of Technology, what parameters should be used during the coating process in order to most effectively produce a coating that will ensure the best overgrowth.”

Veterinary surgeon Michał Stelmaszyk, who had already used the new solution, explained that when ordering an implant based on the needs of a specific patient, computed tomography data is sent to the manufacturer along with detailed needs. He clarified that the implementations so far have primarily been done in dogs and cats.

The Silesian University of Technology has obtained seven Polish patents for its invention regarding bioactive coatings, and submitted eight Polish and four European patent applications for polymer coatings with bacteriostatic properties.