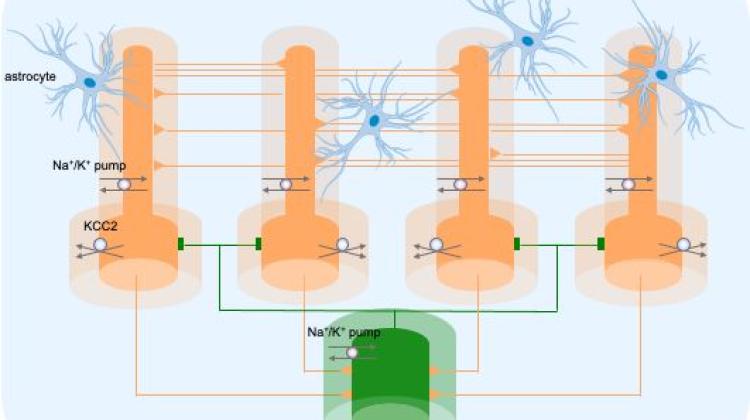 Scientists from Poland and Italy have developed a digital model that explains the possible mechanisms of an epileptic seizure. Simulations have confirmed that a seizure can start with discharges of inhibition neurons in the brain and changes in ion concentrations in the environment around the neurons, representatives of the Faculty of Physics of the University of Warsaw report.

The results published in the prestigious journal eLife (https://doi.org/10.7554/eLife.68541), may contribute to the development of new anti-epileptic therapies.

Epilepsy is one of the most common neurological diseases. Nearly 60 million people in the world suffer from it, including almost half a million people in Poland. Although available drugs manage seizures, they do not work in some patients.

For years, scientists have been trying to understand the mechanisms of this disorder in order to develop new, more effective treatment methods. A step towards the development of new anti-epileptic therapies may be the results of research by scientists from the Faculty of Physics of the University of Warsaw and Istituto Neurologico Carlo Besta in Milan, published in the prestigious journal eLife.

The scientists have shown that epileptic seizures can start with the firing of inhibitory neurons in the brain and changes in ion concentrations in the environment around the neurons. This mechanism, observed experimentally in an animal model (guinea pig brain), was confirmed in a computer model of nerve cells created at the Faculty of Physics of the University of Warsaw.

“If you open any neurology book, you will learn that epilepsy is a disturbance of the balance between the excitation and inhibition processes in the brain. It is assumed that an excessive activity of excitatory neurons induces a seizure,’ explains Dr. Piotr Suffczyński from the University of Warsaw, one of the authors of the publication in eLife, quoted in the press release. However, studies from the last dozen years show that this is not always the case.

“In 2008, a team of scientists from the Istituto Neurologico Carlo Besta in Milan observed a paradoxical increase in the firing of inhibitory neurons and a decrease in the activity of excitatory cells at the onset of a seizure - in an animal model of the guinea pig brain. Ten years later, this mechanism was confirmed also in humans,” says Suffczyński.

For a long time it was assumed that an epileptic seizure develops when successive neurons fire through synaptic connections. Meanwhile, in the 1980s it was shown that you could block synaptic communication between neurons and the seizure would continue.

“In an experiment conducted in 2001, a seizure was induced in a brain slice in vitro. The two parts of the slice were then separated by a scalpel cut. And although the physical connection between the two halves of the slice was broken, the synchronization between them was maintained and the seizure continued. The researchers asked: could something other than neurotransmitters be responsible for the development of a seizure?' says Suffczynski. When in the next phase of the experiment a thin, impermeable membrane was placed between the sections, blocking the flow of ions between the halves, their activities went out of sync. “This confirmed that the induction and synchronization of epileptic seizures may have ionic, not synaptic causes,” Suffczyński says.

Neurons are electrically charged cells, and the unequal distribution of positive and negative ions inside and outside the neuron is responsible for the cell's resting membrane potential. The flow of ions through the membrane allows neurons to change their potential and generate short electrical impulses, or action potentials.

According to the release, sodium ions flow into the cell and potassium ions flow out. To restore the original ionic balance, sodium-potassium pumps pump potassium back in and sodium out. “However, when action potentials are fired at a high rate, sodium accumulates inside the cells and potassium accumulates in the space around the neurons. Elevated levels of extracellular potassium increase the membrane potential of neurons, leading to their increased excitability, which in turn leads to further accumulation of potassium This is how an epileptic seizure is induced,” says Dr. Suffczynski. The 'potassium accumulation hypothesis' was first proposed in the 1970s. “At that time, it was rejected because scientists were unable to explain how the seizures ended. Today we know that in addition to sodium-potassium pumps, glial cells in the brain are also responsible, which not only nourish neurons, but also remove excess potassium from the space around the neurons,” Suffczyński explains.

Based on experimental data, scientists from the Faculty of Physics of the University of Warsaw built a computer model simulating the course of an epileptic seizure. “Our biophysically realistic computational model consists of 5 cells: 1 inhibitory and 4 excitatory cells, glial cells and the surrounding neurons, in which the movement of ions takes place. Using this model, we were the first to show the potential mechanism of seizure initiation by inhibitory neurons through the initial accumulation of extracellular potassium,” says Suffczyński.

The model also shows how the mechanism that contributes to the cessation of seizures works. Sodium-potassium imbalance leads to increased activity of sodium-potassium pumps.

These results show that a seizure may be a physiological process triggered by the destabilization of potassium levels in the brain. “This,” says Suffczyński, “indicates goals for new therapeutic strategies.”