The Polish invention to increase nutritional value of vegan products 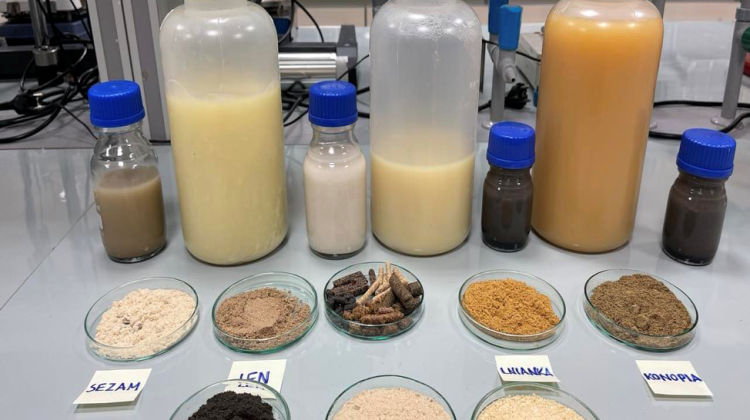 Vegetable dairy substitutes can be produced based on cheap and easily available by-products of oil pressing called oil cakes. Scientists from Szczecin have developed a method of using them, thanks to which, for example, vegan plant-based yoghurts, kefirs and milks may have a higher nutritional and health-promoting value.

The idea of using oil cakes to develop bioactive fermented vegan food products was conceived by the team of Dr. Łukasz Łopusiewicz from the Faculty of Food Science and Fisheries of the West Pomeranian University of Technology in Szczecin. The researchers started a project called ProBioVege.

The project is financed by the National Centre for Research and Development under the Lider XI programme, and its goal is to develop recipes for fermented, bioactive functional foods and food additives. These include vegan yoghurts, kefirs and plant-based milk drinks. All of them are made from oil cakes - residues from oil pressing from seeds of selected oilseed plants: amaranth, black cumin, hemp, camelina, sesame, sunflower and evening primrose. In addition to oil cakes, they contain mixed (yoghurt and kefir) starter cultures and selected probiotic strains.

“This is a large, three-year project to develop plant-based fermented foods as an alternative to dairy products,” Dr. Łopusiewicz told PAP. “It is compliant with the zero waste idea and the assumptions of the Green Deal. Today, almost all such residues are wasted. We are looking for a variety of uses for them, because it is still a valuable product; it has a high nutritional value and contains a lot of substances beneficial to health. It's just devoid of oil.”

The scientist explained that ProBioVege is also a response to the growing interest in vegetarian, vegan, gluten-free, lactose-free and sugar-free products, which has been steadily growing in recent years. Currently, however, this type of food is often of poor quality: it has a high sugar content but low nutritional value. The products developed by the team from the West Pomeranian University of Technology are the opposite: they have a very high content of bioactive ingredients, fibre, and contain beneficial microflora.

Łopusiewicz said: “In the age of social prosperity, increasing nutritional awareness and the search for alternatives to traditionally fermented products, the development of new foods and food additives with health-promoting properties and complementary values is an ambitious goal, but as we have shown, it's possible.

“Due to the elimination of dairy products from the diet, many consumers are looking for alternative sources that provide live cells of microorganisms, including probiotic microorganisms. I managed to build a dynamic team whose several years of research and achievements concern the use of oil cakes (especially flax cake, which is considered a superfood) as raw materials for obtaining fermented semi-solid snacks and plant-based drinks, blue cheese analogues, spray-dried powders and natural additives with emulsifying, antioxidant and stabilizing properties. These products are characterized by a high survival rate of microorganisms and a high content of bioactive ingredients, thanks to which they can be considered functional foods.”

He continued: “Consumers who choose plant-based diets have the problem of eliminating useful microorganisms from their diet because they do not eat yoghurts, kefirs, etc. So they must supplement them. We offer an alternative in the form of plant products that contain these microorganisms. In addition, our products have very interesting properties, because the bacteria present in them, carrying out the fermentation process, produce new, health-promoting ingredients. Fermentation also provides the sour taste and specific aroma of traditional kefirs and yoghurts.”

After development, the finished products are tested by researchers to determine their physical and chemical properties, the presence of bioactive compounds and shelf life in refrigeration conditions. A broad spectrum of their bioactivity is also analysed, including antioxidant and antimicrobial properties. In addition, researchers study their impact on enzymes involved in the development of civilization diseases such as diabetes, hypertension and obesity.

According to Dr. Łopusiewicz, the results are extremely promising. In addition to the antioxidant properties and high nutritional value, some products based on oil cake can combat selected food pathogens, and thus prevent poisoning.

Oil cake is a by-product of cold pressing of oil. When the oil is extracted from the seeds, the remaining pomace is still rich in valuable ingredients such as proteins, polysaccharides and antioxidant substances.

Łopusiewicz said: “All those seeds we use to obtain cold-pressed oils, such as flax, amaranth, hemp, black cumin, sesame, are currently treated as agricultural waste and used to a very small extent. They are thrown away or used as animal feed. And they could be, for example, successfully enrich bread (we are also working on this in collaboration with the Polish Academy of Sciences in Olsztyn) or be used as raw materials for the development of innovative vegan foods, because they contain many ingredients with proven health-promoting properties. And because they contain a lot of protein, their nutritional value is also high.”

OIL CAKES USED IN MANY WAYS

The ProBioVege project is planned for three years. “In the first year, we focused on semi-solid products, i.e. alternatives to thick yoghurts and kefirs. In the second year, we developed plant-based drinks, commonly referred to as +plant milks+. We are currently starting the third year of research, which will be devoted to drying the previously mentioned drinks using the spray drying technique to obtain reproducible functional powders,” Łopusiewicz said.

The resulting powders can be easily reconstituted into a drink by adding water, or used as valuable additions to oatmeal, smoothies and as natural food stabilizers.

Łopusiewicz said: “In this area, we try to take advantage of the fact that oil cakes are rich in proteins and polysaccharides with stabilizing properties and can be a material for microcapsules, in which microorganisms are +enclosed+, which protects them from the external environment and ensures long-term viability and preservation of probiotic properties. Thanks to this, the great advantage of the powders we are working on is that they have a long shelf life.”

Currently available plant-based drinks are most often stabilized with various types of additives. Since they are not emulsions, like real milk products, but suspensions, they tend to separate, sediment; they must be shaken before consumption.

Oil cakes avoid these inconveniences. They stabilize plant products in a natural way. In addition, they contain mucilages with excellent emulsifying and thickening properties, so no additives are needed for drinks made with them; all you need is oil cake and bacteria.

“This gives us a clean composition; we do not add sugar, synthetic thickeners, etc.,” Dr. Łopusiewicz said.

He added that the use of pomace as food additive can be much broader, saying: “It can be used as fat substitute in vegan and low-fat mayonnaises, as well as a base for plant-based alternatives to blue cheeses, e.g. camembert.”

An interesting branch of the ProBioVege project is the study of the impact of oil cake-based foods on combating food pathogens, e.g. Salmonella, Schigella, Staphylococcus aureus, Listeria and Escherichia coli. Scientists from the West Pomeranian University of Technology conduct this research in cooperation with the Pomeranian Medical University.

“All these bacteria produce a variety of toxins that cause symptoms of poisoning. We want to see if, after contact with our products, pathogenic microorganisms will still be able to produce these toxins, or maybe ingredients derived from oil cake will block this ability, affecting the activity of the genes that encode them.”

The last issue related to food poisoning checking whether oil cakes can affect the production of bacterial biofilms.

Łopusiewicz said: “Biofilms are consortia of microorganisms that produce extrinsic polysaccharides. They have the form of thin layers, membranes. Their characteristic feature is a very high resistance to antibiotics and all antimicrobial activities.

“We hypothesise that the compounds found in oil cake can inhibit the production of such biofilms and we are testing it', he adds. 'Preliminary results suggest that some of our products, prepared from certain types of oil cake, indeed have antimicrobial properties. So they have a beneficial effect on our body, and the opposite is true for harmful bacteria: they inhibit their growth, inhibit the expression of virulence genes, etc.”

When it comes to disease prevention, scientists are exploring one more interesting topic: whether the products in question have an effect on the enzymes involved in the development of lifestyle diseases. “If it turns out that they can block the activity of enzymes involved in the development of diabetes, hypertension or obesity, vegan products based on oil cakes could potentially help prevent these diseases. And the results obtained so far indicate the high potential of our products in this area,” Łopusiewicz said.

The researcher emphasized that final conclusions require a series of studies on animal models, and then on humans, but it is already clear that the potential exists. His team has even started working on patent applications for this type of oil cake use.

COOPERATION OF SCIENCE AND INDUSTRY

He added that the products developed by his team have aroused interest on the market. He said: “We are in contact with representatives of quite significant food industry players. They are willing to cooperate, because it is something that is not yet on the market. We conduct part of our research in cooperation with industrial partners. However, we are always trying to attract new manufacturers and other centres to our solutions. We are open to collaboration.”