Cheap and effective - bacteria in the fight for clean water 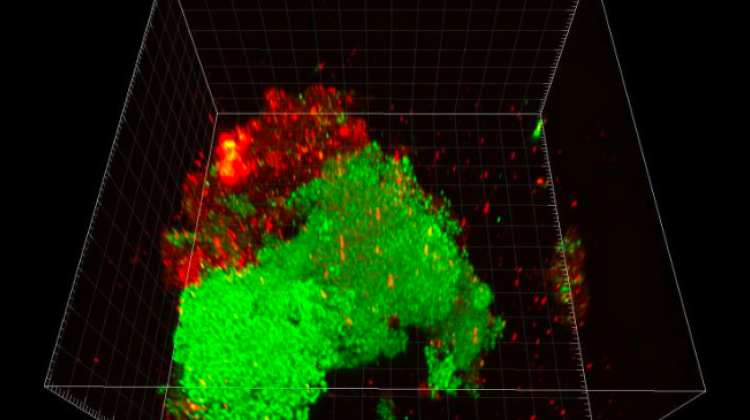 Bacteria are amazing creatures, single-cell processing plants that can process any type of waste in biological wastewater treatment plants, if they are adapted accordingly. Among them are bacteria with unusual cell structure, capable of anaerobic oxidation of ammonia - anammox.

Planet Earth is a place where life is based on proteins, organic compounds that contain an amino group, in which the most important component is the nitrogen atom. For this reason, we discharge a significant amount of compounds of this element from our homes to wastewater treatment plants, including water-damaging ammonia. Wastewater treatment plants remove it so that the treated wastewater meets strict domestic and EU standards.

Currently, the most common type of municipal wastewater treatment plants are biological treatment plants, in which bacteria do the "dirty work". Bacteria are single-celled organisms with very simple structures, whose substrate processing capacities are invaluable. They may exist in the form of a flocculent suspension called activated sludge or in various types of biofilms or granules.

Bacteria involved in nitrogen transformation are extremely important in the processes of wastewater treatment precisely because nitrogen is one of the main biogenic elements (those on which the structure of organisms is based) removed from wastewater.

It is a well known fact that all kinds of technologies should be cheap and effective. Efforts of scientists around the world focus on the creation of such tools. For many years, researchers from various centres in the country and abroad have been outdoing each other in technology proposals for effective wastewater treatment.

Scientists from the Silesian University of Technology run a research project funded by the National Science Centre. They study a group of bacteria that are extremely interesting in terms of microbiology and very effective in the removal of ammonia from wastewater. This group includes microorganisms capable of anaerobic ammonia oxidation, in short - anammox.

What is anaerobic oxidation? Oxidation processes do not have to be associated with oxygen, they can also occur in anoxic conditions, in which the acceptor of electrons in the oxidation processes is something other than oxygen. In the case of the anammox process, these are nitrate ions (III).

What is so interesting about these particular bacteria? Bacteria are organisms with very simple structures. One of the features that differentiate them from higher-level cells, such as human cells, is the lack of compartmentation inside the cell. In other words, there are no inter-cell compartments separated by internal membranes that would allow different processes to be carried out at the same time. Anammox bacteria are unique in this respect because they have membranes inside their cells, including the membranous structure called anammoxosome.

That is where the enzymes responsible for the anammox process are located. This process is extremely desirable in wastewater treatment plants, because it allows for savings on the purification process. The process does not require oxygen and is autotrophic, which means that the bacteria do not need additional "feeding". They produce food themselves. Savings are generated by eliminating the need for aeration and an additional carbon source for bacteria that need it in traditional treatment plants when removing nitrogen compounds.

It turns out that just like people, anammox bacteria do not like to live alone. Both in natural habitats and in wastewater treatment plants, these bacteria live in biocenoses, multi-species ecological systems, remaining mutually dependent. Such mutual relations in nature mean that bacteria from complex environments can not be grown in the laboratory as pure cultures, or groups of bacteria of a single species.

Researchers from the Silesian University of Technology are trying to find out why anammox bacteria do not want to grow alone. Research in the project focuses on showing ecological relationships, including the location of these bacteria in relation to each other and changes in the structure and functioning of the entire culture in the research system depending on the variable technological parameters.

The anammox process requires a relatively high temperature considered optimal for its effective operation. Scientists from the Silesian University of Technology are working on the possibility of reducing the process temperature to 15°C without a major change in its efficiency. Why? Because municipal wastewater directed for treatment does not have the temperature required for this process (above 30°C), and "heating up" the bacteria in the treatment plant would mean additional costs.

The "cold" version of the anammox process can be additionally supported, for example by nanomaterials such as graphene oxide or its reduced form, thanks to which the process becomes more effective. Mariusz Tomaszewski develops this research in his project financed with the National Science Centre`s PRELUDIUM grant. The second doctoral student in the team, Anna Banach, also within the framework of a PRELUDIUM grant, deals with the possibility of bacterial retention in bioreactors in the process of immobilization. She also tests the impact of this procedure on the efficiency of the anammox process. The researcher uses different types of cross-linking substances that will keep the bacterial suspension in the reactor without compromising the process quality.

The anammox process, and in particular its "cold" version, appears to be a good and economical alternative to classic technological systems in wastewater treatment plants. The results obtained in the project on the bacterial composition of bacterial clusters show that there are still many anammox bacteria that have not been studied and appear as "unknown" in databases. That is why researchers from the Silesian University of Technology still have a lot of work to do.

Dr. Aleksandra Ziembińska-Buczyńska is a microbiologist at the Silesian University of Technology and the leader of the described project. Since 2017, he has been managing the Silesian University of Technology Science Promotion Centre. In 2015, she took third place in the third Polish edition of FameLab. She hosted the show "Inventors of the Future" on CANAL+ DISCOVERY, in which she presented Polish inventions and discoveries expected to change our world in the near future. She is a finalist of the Science Promoter 2017 competition co-organized by PAP - Science in Poland and the Ministry of Science and Higher Education.

The article is one of the results of the program Spokespersons of Science, organized by the Copernicus Science Centre and the British Council Foundation. The program facilitates establishing cooperation between scientists who promote knowledge and science journalists.